SAM, the preferred method for the non-destructive internal inspection

Nowadays, plastic encapsulated parts are used in most microelectronics systems. However, plastic encapsulation involves some inherent rinks such as corrosion, popcorn cracking, wire necking/breaking, and others leading to catastrophic failures. Scanning Acoustic Microscopy has revealed as the most effective and complete non-destructive approach for the detection of critical and latent anomalies within plastic encapsulated parts, either before soldering and on assembled systems: Therefore it is routinely used and required to screen out potentially defective parts before the implementation into different industrial sectors such as automotive, military industry, avionics, space applications, and others. 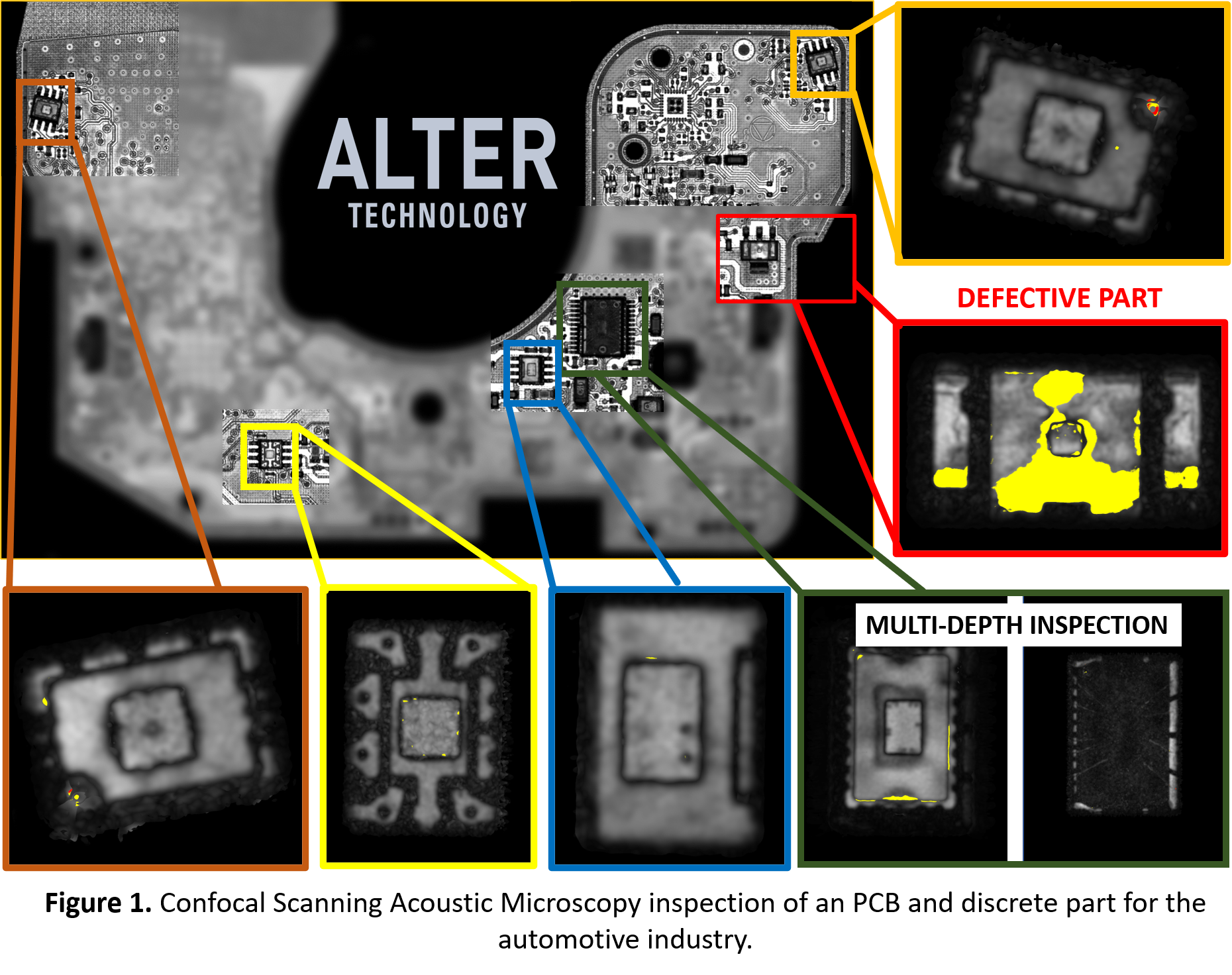 Since the development of plastic encapsulated microelectronics (PEMs) in the late 1960s, this encapsulation approach has become extensively used, and nowadays it is present in the production of more than 98 % of the microcircuits worldwide. However, in the beginning, they were banned from high-reliability applications and systems under hard working conditions involving high temperatures, thermal oscillations, humid environments, or vibrations and mechanical stress. This was due to the inherent susceptibility of this technology to critical failure mechanisms related to the lack of hermeticity (moisture ingress) and the coefficient of thermal expansion of moulding materials (CTE mismatch).

Nevertheless, during the last decades, they have gained importance in different industrial sectors involving critical systems such as the military industry, avionics, space, and others. The extension to these markets was possible thanks to the development of enhanced encapsulant materials and the introduction of the Scanning Acoustic Microscopy (SAM) technique for the specific detection of the most frequent anomalies within PEMs. For instance, Figure 1 shows an example of the SAM inspection conducted on a PCB for the automotive industry.

Confocal Scanning Acoustic Microscopy (C-SAM) has proved to be the most effective non-destructive approach for the screening of COTS parts and the detection of latent internal anomalies in PEMs, either before soldering or for assembled systems.

Therefore, this kind of inspection is mandatory before the implementation of non-hermetic systems into space and military applications (see specifications MIL-STD-883, MIL-STD-1580, NASA PEM-INST-001, ESCC25200, and ECSS-Q-ST-60). Furthermore, C-SAM is routinely used in failure analysis and to screen out defective parts in other industrial and technological sectors such as avionics and the automotive industry.

Note that, nowadays, automobiles feature different electronic systems for convenience and safety. However, the electronics components are exposed to thermomechanical stress (temperature oscillations) and other environmental factors associated with fatigue, which makes it necessary to assess the presence and development of internal failures.

In this regard, Figure 1 shows the inspection of a PCB (automotive sector) where the C-SAM technique allows us to detect a defective part. In this case, the rejectable part shows delamination that extends from the outside to the die edge. This is a rejectable defect as it opens a preferential path for the ingress of moisture and other contaminants and corrosive substances, and it is a subjacent cause for corrosion failures. 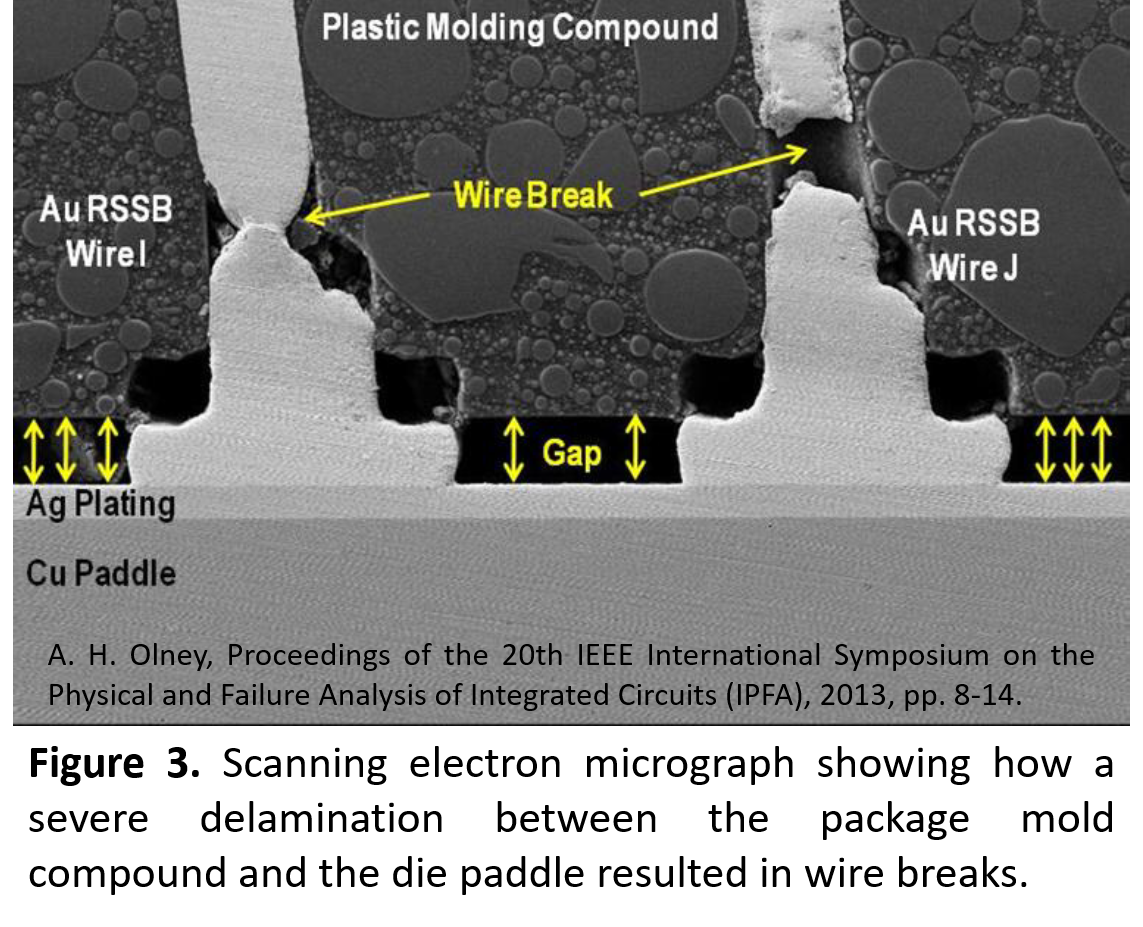 Also, such anomalies tend to grow under thermal-cycling conditions (engine accelerations and decelerations) and compromise the internal mechanical stability of the affected part. Figure 2 shows how this anomaly cannot be detected by X-ray inspection and illustrate how C-SAM is the only non-destructive technique for the detection of delaminations within plastics.

It is also worth to mention here the critical role played by delamination in PEMs; since it is the root cause for the different failures mechanism, such as corrosions, disbanding, metallization deformation, poor thermal dissipation, and wire break and necking; as it is illustrated in Figure 3. Therefore, C-SAM is a valuable diagnostic tool to foresee and take the required measures to prevent such defects and the infant mortality of the device. 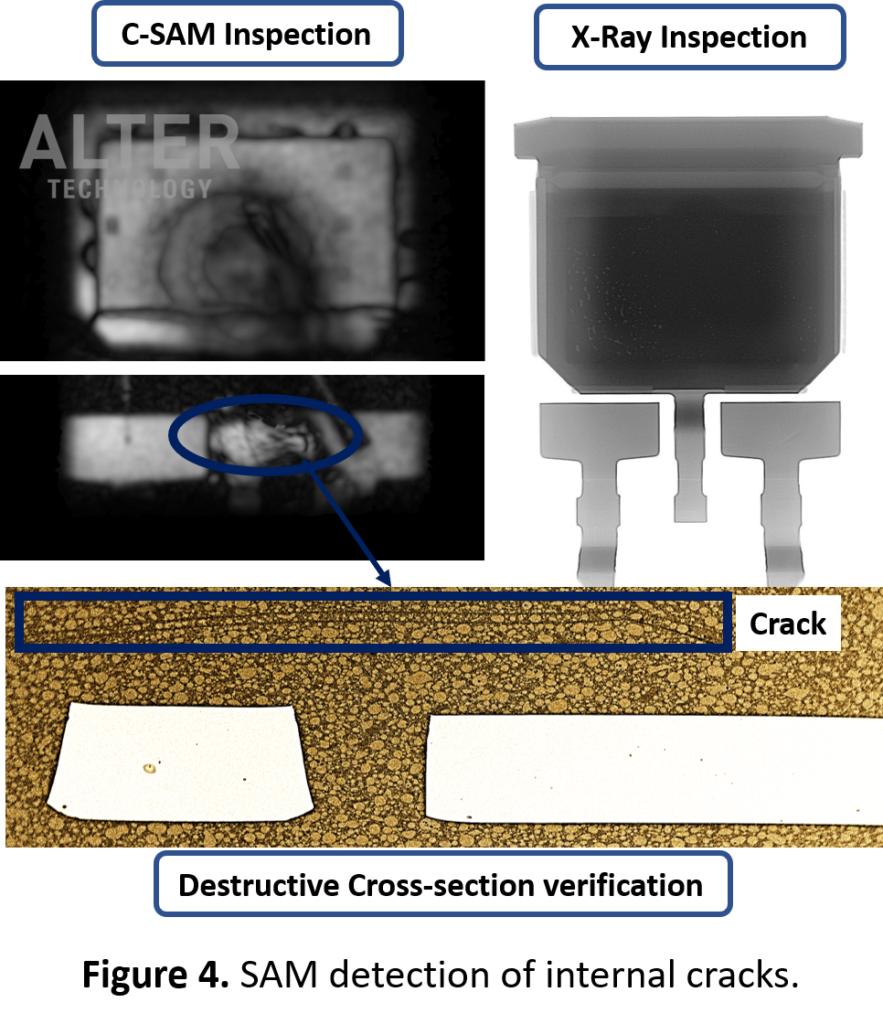 Scanning Acoustic Microscopy is not only sensitive to delamination but also to voids, foreign materials, and cracks in plastic encapsulated systems. Figures 4 shows an example of crack detection within a power transistor. Again, this anomaly was not detected by X-ray inspection (Figure 4 right) although the defect was also confirmed by a destructive cross-section inspection (Figure 4 bottom).

Moreover, this technique is critical to assess the moisture-sensitive level of PEMs and the risk of popcorn cracking. Popcorning is a common failure mechanism in PEMs, leading to the development of internal and external cracks during soldering reflow and assembly processes as mentioned before water abortion is one of the main drawbacks of PEM. During soldering reflow, the parts are exposed to high external temperatures as high as 220 ºC.

Such a sudden temperature increase induces the abrupt evaporation of the absorbed water leading to internal pressures and cracking, which jeopardizes the performance. This represents a higher risk as to the solder temperate increase as it is the case for mandatory Pb-free solders. With this concern, PEMs are classified by the moisture-sensitive levels (MLS) as per J-STD-020E, which makes use of C-SAM to determine the impact of the soldering reflow process on PEMs.

Besides the applications mentioned before, C-SAM also provides reliable solutions for the accurate detection of ultra-thin delaminations as thin as few nanometres in assembled systems either between metallics parts and hybrid plastics/metallic systems, which affect the thermal management. Similarly, it is also used for the verification of attaching medium and the bulk inspection of plastics and ceramics and therefore capacitors (see Figure 5). 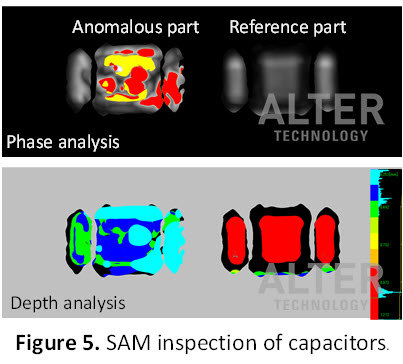 Scanning Acoustic Microscopy is a very complex technique. Thus, a suitable inspection not only requires reliable equipment, but more importantly, trained, and experienced staff with deep knowledge about the fundamentals of the technique, its capabilities, and the inspected parts.

In Alter Technology, the Scanning Acoustic Microscopy Lab involves a qualified (Ph.D., M.Sc.) and multidisciplinary team specialized in different disciplines such as Materials Science, Physics, Electronics; together with a highly experienced technical staff with a solid background in microscopy, materials analysis and EEE inspection. This team is supported by more than 30 years of experience in Alter Technology in EEE testing and engineering.

Francisco J. Aparicio (Ph.D. in Materials Science) has developed an extensive research career with more than 30 scientific papers in an indexed research journal and more than 70 contributions to international conferences. Mr Aparicio has been the principal investigator of 4 international and national research projects. In 2018 he was appointed to lead the Scanning Acoustic Microscopy Laboratory¡ of Alter Technology TÜV Nord.