As electronic devices saturate all corners of public and personal life, engineers are scrambling to find lightweight, mechanically stable, flexible, and easily manufactured materials that can shield humans from excessive electromagnetic radiation as well as prevent electronic devices from interfering with each other.

In a breakthrough report published in Advanced Materials—the top journal in the field— engineers at the University of California, Riverside describe a flexible film using a quasi-one-dimensional nanomaterial filler that combines excellent electromagnetic shielding with ease of manufacture. 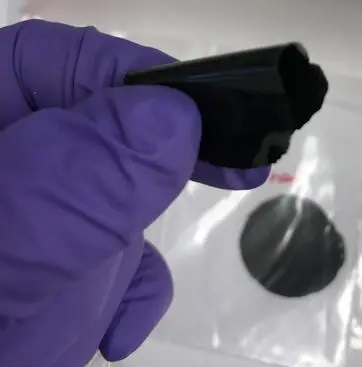 Electromagnetic interference, or EMI, occurs when signals from different electronic devices cross each other, affecting performance. The signal from a cell phone or laptop WiFi, or even a kitchen blender, might cause static to appear on a TV screen, for example. Likewise, airlines instruct passengers to turn off cellphones during landing and takeoff because their signals can disrupt navigation signals.

Engineers long ago learned that any electrical device could influence a nearby device’s functioning and developed materials to shield electronics from interfering signals. But now that electronic devices have become ubiquitous, small, wirelessly connected, and critical to innumerable essential services, the opportunities for and risks of EMI-caused malfunctions have proliferated, and conventional EMI shielding materials are often insufficient. More electronic devices mean humans are also exposed to greater electromagnetic radiation than in the past. New shielding materials will be needed for the next generation of electronics.

Doctoral student Zahra Barani and Fariborz Kargar, a research professor and project scientist with Balandin’s Phonon Optimized Engineered Materials, or POEM Center, synthesized the unique composites by treating the transition metal trichalcogenides, or TaSe3, a layered van der Waals material with a quasi-one-dimensional crystal structure, with chemicals that caused it to shed needle-like, quasi-1D van der Waals nanowires with huge aspect ratios of up to ~106— massively longer than thick. In previous research, the group discovered that bundles of quasi-1D TaSe3 atomic threads could support high-current densities.

There was no standard recipe for exfoliation of these materials. I did many trial and error experiments, while checking the cleavage energy and other important parameters to exfoliate them with high yield. I knew that the key is to get bundles with as high aspect ratio as I can, since EM waves couple with longer and thinner strands better. That required optical microscopy and scanning electron microscopy characterization after each exfoliation step,” first-author Barani said.

The researchers filled a matrix made from a special polymer with bundles of the exfoliated TaSe3 to produce a thin, black film. The synthesized composite films, while remaining electrically insulating, demonstrated exceptional performance in blocking electromagnetic waves. The polymer composites with low loadings of the fillers were especially effective.

The electromagnetic shielding effectiveness of composites is correlated with the aspect ratio of the fillers. The higher the aspect ratio, the lower the filler concentration needed to provide significant EM shielding,” Kargar said. “This is beneficial, since by lowering the filler content one would take advantage of inherent properties of polymers such as light weight and flexibility. In this regard, I can say this class of materials are exceptional once they are exfoliated properly, controlling the thickness and length.”

In the end, I got them right, prepared a composite and measured the EMI properties. The results were amazing: no electric conductivity but more than 99.99% of EMI shielding for micrometer thick films,” Barani added.

I am sure we will soon see a lot of progress with quasi-1D van der Waals materials, as happened with quasi-2D materials,” he said.

Why do a PIND test – Particle Impact Noise Detection