Aircraft engines are becoming ever quieter and more environmentally friendly  thanks to digital technology. HIREX ENGINEERING a member of Alter Technology France,  is helping to ensure that the  FADEC electronic engine control system works reliably.

When aircraft manufacturers started to install just two seats instead of three in airliner cockpits in the 1980s, this was something of a mini-revolution. Since that time, planes have generally been flown by just the pilot and co-pilot. The flight engineer, a third crew member whose job it was to supervise the instruments, has become surplus to requirements. This job is now done by digital technology. Take the example of aircraft engines: Sensors collect any amount of information, such as the density of the air and the pressure in the engine, in some cases more than once a second. On the basis of these data, a digital control system such as the Full Authority Digital Engine Control (FADEC) monitors and regulates variables like, for instance, fuel supply, speed and thrust reversers, so the propulsion system always works with optimal efficiency and minimum fuel consumption. The system also permits the monitoring of engines from the ground. Technicians can, for example, identify which components will soon need to be replaced or repaired. 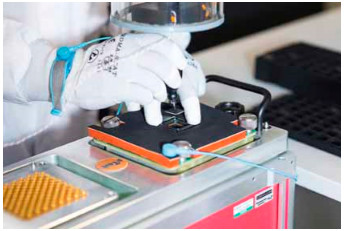 Electronic memory components have to withstand temperatures ranging from –55° to +125° C.

These are then simply renewed at the next stop, saving time and money. “FADEC is part and parcel of the big data concept in the aviation industry,” explains Yannick Soler, quality manager at HIREX ENGINEERING (HRX), a subsidiary of ALTER TECHNOLOGY TÜV NORD, based in Toulouse.

HOW HIREX ENGINEERING DOES ITS TESTING

In the selection process, FADEC components must prove themselves in rigorous tests in the HRX laboratories: In the Highly Accelerated Temperature and Humidity Stress Test (HAST) semiconductor components are exposed to heat and humidity in a hyperbaric chamber. In this manner HRX examines how efficiently the protective cover is shielding the technology so that it can operate reliably under extreme conditions. 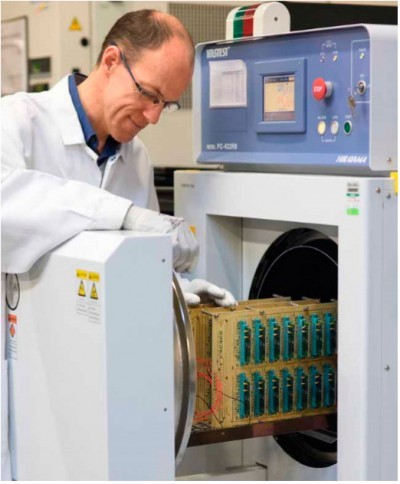 Plastic components are exposed to heat and humidity in the HAST test.

Hirex has been working for more than a decade for the FADEC manufacturer Sagem.

This belongs to the Safran group which produces, among other things, aircraft engines. “We select suitable components for the production of FADEC – from humble plastic parts right through to complex memory modules,” explains Frederic Tilhac, Test Lab Manager at HRX. Usually, however, these components are not intended for use in aeroplanes. FADEC is installed on the engine and must be able to work reliably even at extreme temperatures, or in conditions of humidity or vibration, or in salt-laden air. “The components must withstand, for example, temperatures between –55° and +125° C, in some cases up to 175° C. With extensive testing and analysis, we simulate real operation conditions and make sure that the components meet all the requirements of our customers,” says the micro-electronics engineer.

The 45 employees of HRX test over 200,000 parts per year for a dozen customers in the aircraft industry. HRX also keeps a watchful eye out to ensure that only original parts are used. “Projects in the aircraft sector often run for 30 years or longer. Which is why components sometimes have to be purchased from brokers. We make sure our customers don’t get any outdated or counterfeit parts for the entire life cycle of the production,” says Soler. 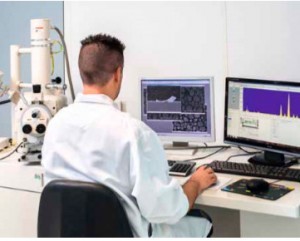 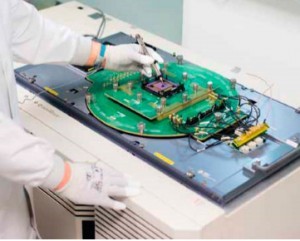 An integrated circuit on the test bed.

Hirex Engineering is also involved in the development and construction of the latest generation of engines from the Safran Group, the LEAP motor. This consumes 15 per cent less fuel than its predecessor, is much quieter and more environmentally friendly, and is responsible for getting such aircraft as the Airbus A320neo and the Boeing 737 MAX airborne. “As more and more functions on the plane are switching to electronic control, the data streams generated are growing,” explains Tilhac. “So the capacity of the on-board computers is increasing. Devices and storage media are having to deal with increasingly complex tasks and work more quickly. To allow us to evaluate new types of components, we keep our test facilities and our know-how constantly up to date.”

Sometimes, however, even digital technology and the careful selection of components cannot completely exclude the possibility of faults. In 2015, for instance, various different airliners around the world had to be grounded. The reason: A component that converted hydraulic pressure into an electrical value was failing under cold conditions. HRX was able to help here too: “We carried out a special test at –65° C and tracked down the fault in the part,” reports quality manager Soler. In this way, HRX is helping to optimise the performance of the digital third man in the plane.