To further characterise the biological environment on Mars in preparation for robotic missions and then human exploration. Data from the mission will also provide invaluable input for broader studies of exobiology – the search for life on other planets. 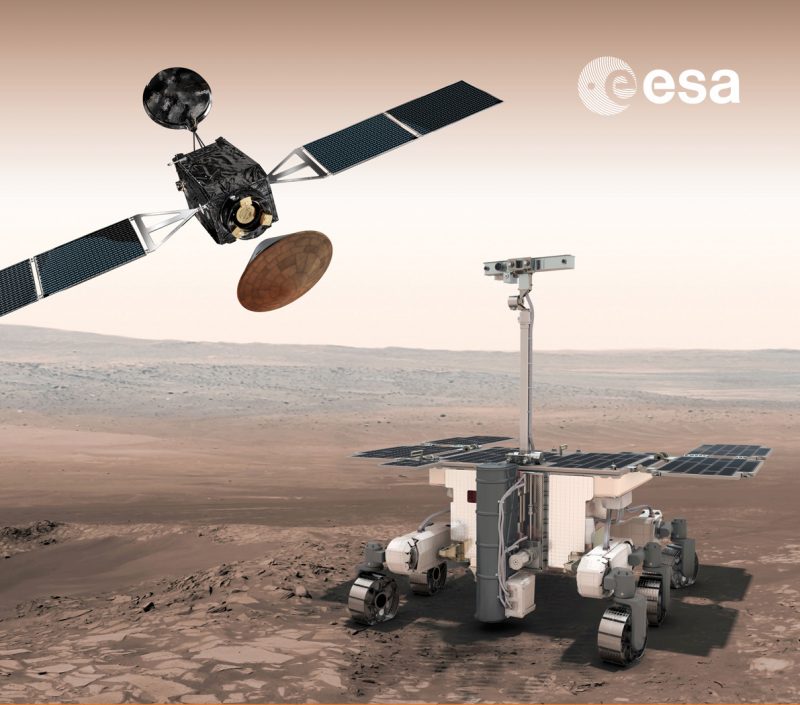 The programme includes several spacecraft elements to be sent to Mars on two launches. The ExoMars 2016 Trace Gas Orbiter (TGO) and an ESA-built EDM stationary lander called ‘Schiaparelli’ will be launched in March 2016. The TGO will deliver the stationary lander and then proceed to map the sources of methane and other gases on Mars, and in doing so, will help to select the landing site for the ExoMars 2018 rover (to be launched in 2018 on a Russian heavy lift Proton launch vehicle). The TGO features four instruments and will also act as the communication relay satellite for the follow-up rover. In 2018 a Roscosmos-built lander is to deliver the ESA-built rover to the Martian surface.

According to plans formulated by December 2009, a NASA Atlas V 421 rocket was to launch the European Trace Gas Orbiter and the Entry, Descent and Landing Demonstrator Module, EDM, in January 2016, with the goal of arriving to Mars in nine months in October 2016.

The orbiter would release the lander during its approach to Mars, after which, EDM would use a parachute followed by a rocket-powered landing with the help of liquid-propellant engines.

According to the original plans, the 700-kilogram ESA lander was designed to survive on the surface of the Red Planet for around eight sols (Martian days) only on battery power and doing limited science. Later, its lifespan had to be reduced to four sols. However the main purpose of the lander was the technical validation of a future European system to conduct a controlled soft landing on Mars. The European lander was proposed to replace an American spacecraft originally considered for this mission.

As of 2009, in April 2018, NASA’s Atlas rocket would launch the European Space Agency’s long-delayed ExoMars rover and a smaller NASA rover (Mars Astrobiology Explorer-Cacher, MAX-C) to look for signs of life on Mars. The rovers were scheduled to land in the same location on the Red Planet in January 2019. Thanks to a highly intelligent navigation system, the mobile robots would travel for several miles across the Martian surface.

The European spacecraft would use a ground-penetrating radar to locate subsurface features associated with the past presence of water. It would then drill as deep as two meters below the surface to extract samples for in-situ analysis

In order to be successful ExoMars will require advanced technology in the following areas:

Check here a video where everything looks good in ExoMars