Space industry is especially careful with the quality and reliability aspects of the EEE parts used in any application. In this sense, and depending on the project class, electronic components  have to be submitted to different set of tests like burn-in, thermal cycling, seal test, humidity test, etc…

But, once all test and controls have been successfully passed, can be considered the parts as “Space Qualified” forever? The answer is ‘NO’. As a general rule, a very old device should not be used in the application even though the storage had been done in the proper controlled conditions (temperature and humidity).

An important parameter to be taken into account before parts assembly is the Date Code, which gives information about device’s manufacturing date. But, when can be considered a device “too much old” to be used in the application? The ECSS-Q-ST-60-14C procedure was written in order to have a standard which regulates the use of devices that have been stored. This standard specifies the “relifing” requirements to be considered on EEE parts that are intended to be used for space applications.

What is a “relifing”? The relifing process is a lot quality control activity for parts that have been stored during a time and will be used in a project, but taking into account that, inspections and tests defined do not constitute an up-screening or up-grading of components to a higher level of quality than procured to. And finally, the Relifing process will certify as “fit” a device’s lot.

Class 3 is limited to only a few of families: 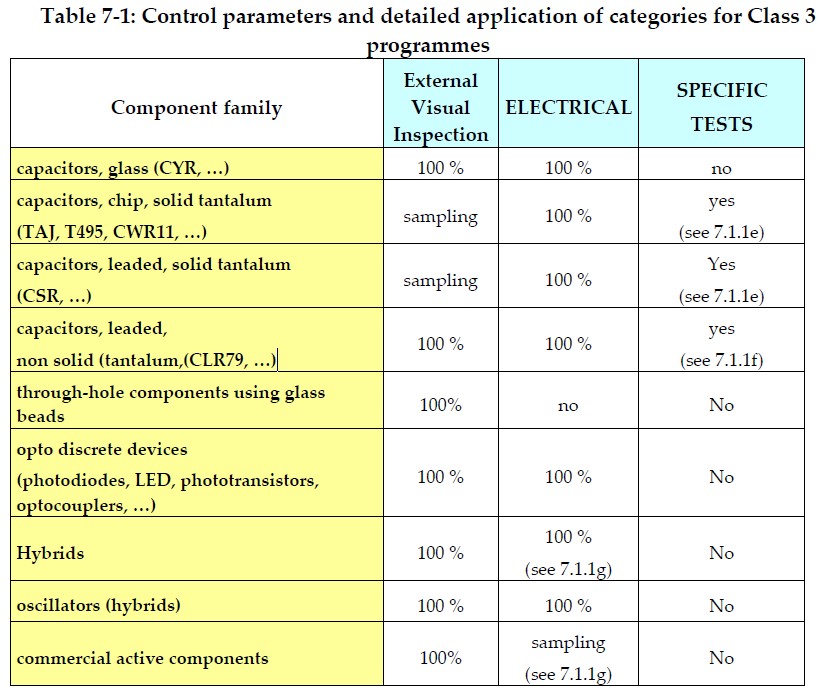 In this Class 3 requirements, note the absence of Seal Test.

2.Introduction of the applicability of the relifing requirements to commercial components.

3.Change of timing requirements for relifing. Now, it’s increased the maximum elapsed time between date code and time of mounting from 10 to 15 years.

In the first issue, the time line was:

Now, in Revision 1, the new relifing time line is:

4.Change in Sampling. For Electrical Measurements and External Visual Inspection, for some families, the test is performed by sampling. In the original ECSS-Q-ST-60-14C, the sampling was given in accordance with following rule, calculated with respect to the number of relifed parts:

Apart of these main changes, there are some minor editorial changes.

Joined Alter Technology in 2004, has worked in different departments, from System Information to the Engineering Department, including EEE Parts Laboratory.