At the beginning of September 2019 Smoltek team presented at PCNS conference their achievement of 350nF/mm2 capacitance density by their carbon nano-fibre metal-insulator-metal (CNF-MIM) technology.  The company announced recently double of the capacitance density to +650nF/mm2 again.

“To give passive components (such as capacitors, inductors, resistors) the attention it deserves being critical components the EPCI arranges the conference PCNS (Passive Components Networking Symposium) every second year”, says Dr Tomas Zednicek founder of EPCI.

The IC industry, following Moore’s Law, has been focusing on the downsizing and the increased density of the integrated transistors, as that has been the main driver for scaling performance. But the electronic circuits need an increasing amount of better passive components within ever-shrinking package sizes.

Introducing CNF-MIM to the EPCI community in September 2019 Smoltek attended the 2ndPCNS, this year held in Bucharest, Romania. For Smoltek the PCNS was a unique possibility to meet and discuss with potential discrete CNF-MIM capacitor license customers, I .e.discrete capacitor manufacturers, as well as their customers. Researchers from academia specialized in the passive components were also presenting their work.

One of the themes discussed during the three-day conference was the inherent problems with MLCC class II DC bias, temperature and ageing degradation. This causes a lot of problem for the system designers where all these factors add up to a reduction of a majority of the rated capacitance. The consequences can be fatal errors, e.g. in automotive, aeroplane or space contexts, as we learned at the conference.

“We couldn’t have had a better pre-setting for our paper, presented at the conference by R&D Engineer Dr Sascha Krause. The Smoltek paper also received the Outstanding Award as voted by the PCNS attendees”, says a pleased Ola Tiverman, COO at Smoltek.

The Smoltek’s awarded paper link is here: “Integrated and Discrete Capacitors Based on Carbon Nanostructures with Capacitance Densities in Excess of 350 nF/mm2” 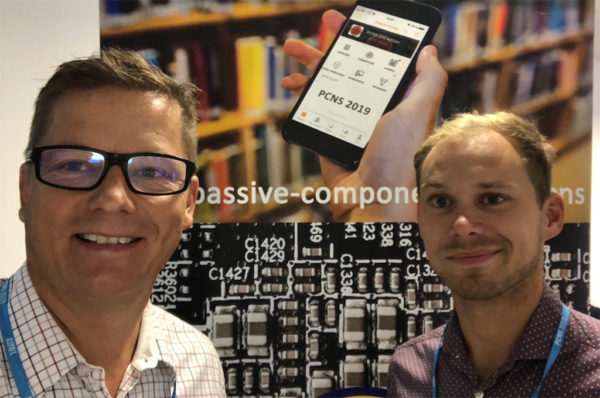 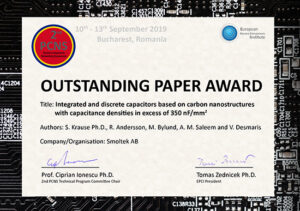 “Thank’s to the organizers at EPCI and all the participants.We’re looking forward to seeing you again in Italy 2021!”, Ola says.

But that is not all from Smoltek!

A year ago, the capacitance density for the CNF-MIM capacitor technology was at 200nF/mm2. In May this year, it had risen to 350 as presented at the PCNS. And now Smoltek nearly has doubled that to +650 nF/mm2 ! as announced during SEMICON Taiwan event end of September 2019.

“The CNF-MIM technology now offers capacitance densities in excess of 650 nF/mm2 at robust temperature and voltage performance. This is more or less a doubling of the capacitance density performance that was presented at ECTC 2019 earlier this year.”, says Vincent Desmaris, CTO at Smoltek.

PCNS is a bi-annual international symposium organized by EPCI in co-operation with a European tech university. This year the event was organized for the second time in Bucharest, Romania. The first PCNS event was held in Brno, Czech Republic 2017 and this year it was co-arranged with University Politehnica in Bucharest, Romania. The 2021 third PCNS is preliminarily planned for Milan, Italy hosted by Politecnico di Milano university.