A method to communicate data at high frequency (400Mbits to 4Gbits) using a very low voltage swing (e.g., 350mV) over differential Printed Circuit Board (PCB) traces or a balanced cable.

The differential signals also tend to radiate less noise than single-ended signals due to the canceling of magnetic fields. In addition, the current mode driver is not prone to ringing and switching spikes, further reducing noise. Because differential technologies such as LVDS reduce concerns about noise, they can use lower signal voltage swings. This advantage is crucial because it is impossible to raise data rates and lower power consumption without using low voltage swings. The low swing nature of the driver means data can be switched very quickly. Since the driver is also current-mode, very low – almost flat – power consumption across frequency is obtained. Switching spikes in the driver are very small so that ICC does not increase exponentially as switching frequency is increased. 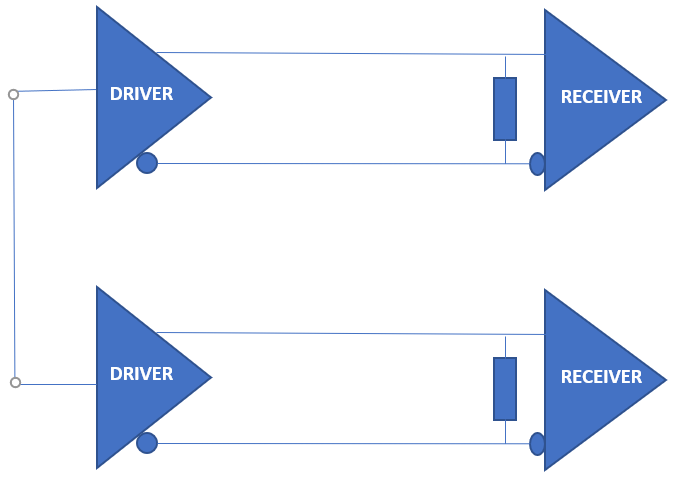 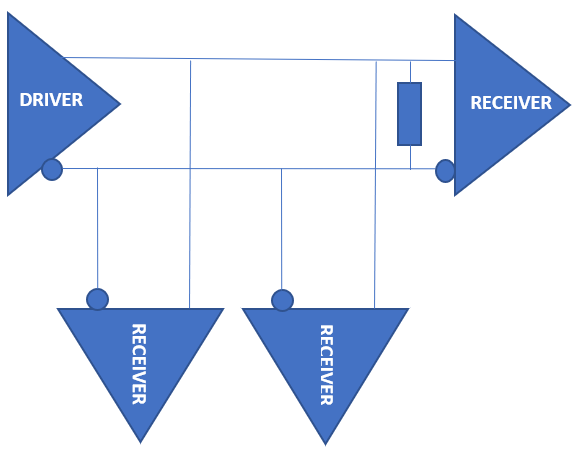 Another variant of multiple points to point topology consists of two driver/receiver pairs that transmit and receive signals between two points over a single interconnect. 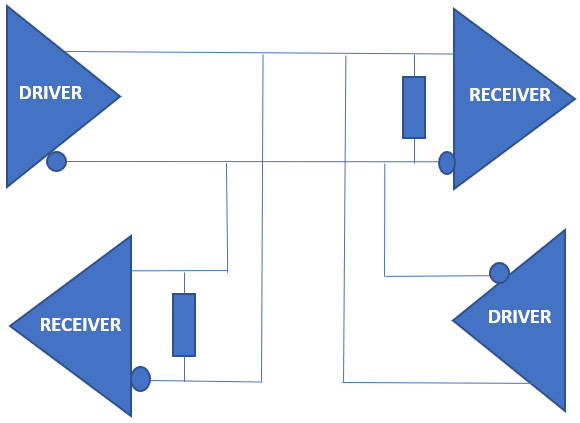 Manufacturers of high-performance analog-to-digital converters (ADCs) and digital-to-analog converters (DACs), use LVDS outputs to transmit digital data at high rates to keep up with the increasing demand for faster sampling rates. One key characteristic of an ADC is that it can accurately convert an analog signal to a corresponding digital representation. Noise radiating from a digital output of the converter can reduce the overall accuracy of the converter by introducing errors at the analog front end. At high sample rates, single-ended outputs generate this kind of harmful noise. LVDS outputs are capable of keeping up with the high data rates and keeping noise emission low, thus protecting the performance of the analog front end. Additionally, some manufacturers have reduced the number of wires necessary to transmit the signals from one point to another by serializing the output bits onto an LVDS pair, which further improves accuracy by avoiding skew-related errors that can occur when transmitting data in parallel.

The low noise emission and high noise rejection characteristics of LVDS make it a practical, reliable choice for military and aerospace applications as well. These applications are often located in harsh, noisy environments with extreme temperatures. LVDS interfaces for avionic communications, surveillance, and intelligence can protect the integrity of the transmitted signals in these environments. In addition, widespread adoption of the standard has produced an abundant supply of LVDS components and devices that make it possible to acquire high-quality, low-cost LVDS parts.

LVDS technology id being widely accepted in space applications solving the increasing demand to move data quickly from box to box or from PCB to PCB within a satellite. Moving large amounts of data requires an extremely high-performance solution that consumes low power, generates little noise and are relatively immune to noise.

In applications requiring high reliability, cold sparing enables a redundant device to be on the data bus without drawing additional power. The device can be kept in cold spare mode and powered up only when necessary, allowing the application to save power.

These devices are ideal in applications where redundant subsystems are to remain in a high impedance power-off state, which also allows it to be connected to the LVDS bus while being electrically isolated from the data bus.

Consists of a current source output which drives a closely-coupled/spaced differential pair of conductors. Termination resistor at the receiver which matches the differential impedance of the transmission line completes the current loop. The direction of current flow determines the logic level at the receiver. 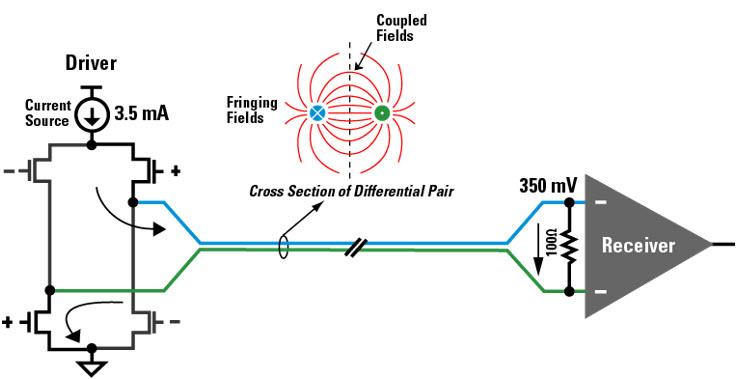 Is a specialized voltage comparator that recognizes the logic state by the voltage polarity across the termination resistor. It is fail-safe, i.e., if the driver loses power, is disabled or is removed from the line, receiver outputs remain in a known state (high).

The combination of both, driver and receiver is called transceiver 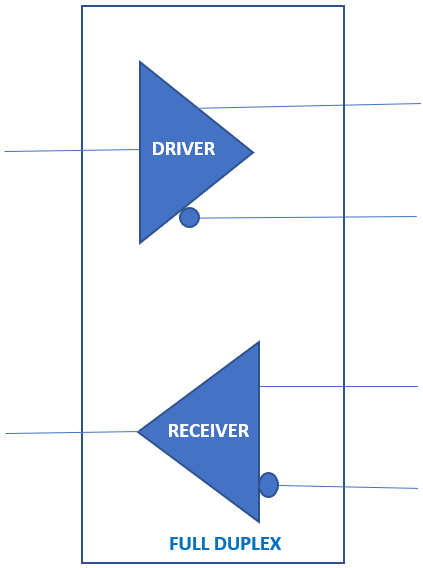 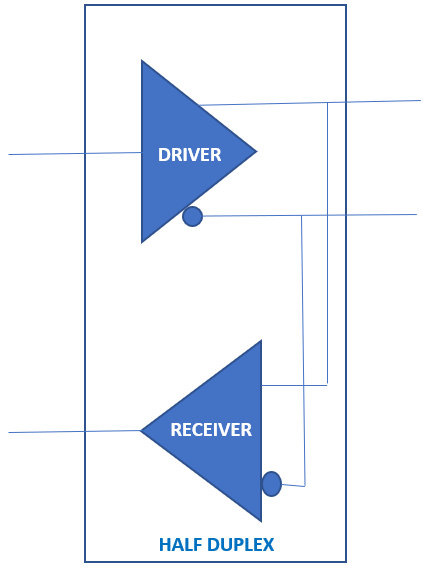 Serializer/deserializer pairs are used to multiplex a number of low-speed CMOS lines and to transmit them as a single channel running at a higher data rate. SerDes ICs are typically used to reduce the number of connector pins or lines within cables and backplanes. SerDes functions are being embedded into large and complex ICs in order to reduce the number of I/O on the IC package.

One of the main advantages of serializing data is skew prevention. Skew is an inherent problem with sending parallel data and its clock across cables or Printed Circuit Boards (PCB) traces. Data and clock recovery are used by the deserializer to extract the serialized data and clock and turn it back into parallel data. Transmitting serial data as opposed to parallel data also reduces the number of interconnect cables or traces required. Thus, reducing the space needed for interconnect.

Switching architectures are favored over bus architectures when data-rates are high. As a consequence, switches tend to operate at high data rates. LVDS is a common choice for the I/Os on these IC’s. Switches can be used for clock distribution. LVDS is one of the most suitable signaling standards for clocks of any frequency because of reliable signal integrity.

An example of a quad 2×2 Crosspoint Switch has 4 cross-coupled switches: 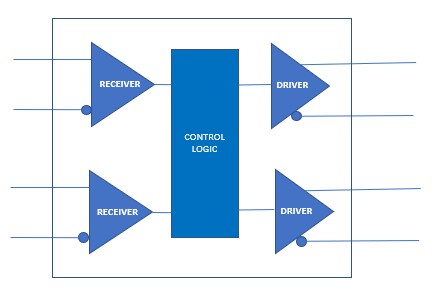 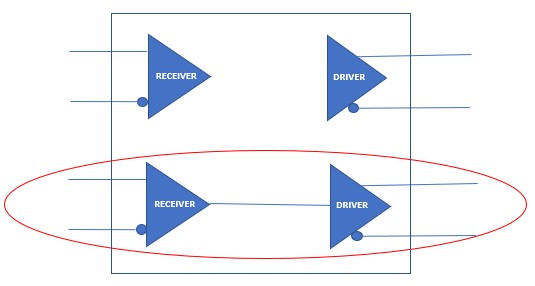 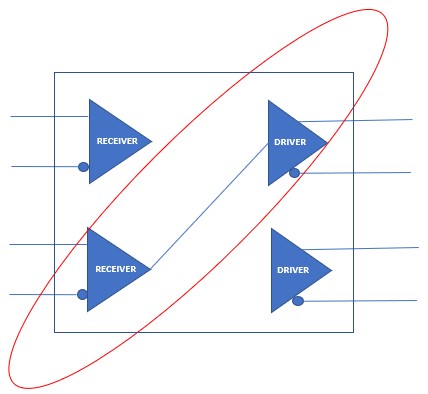 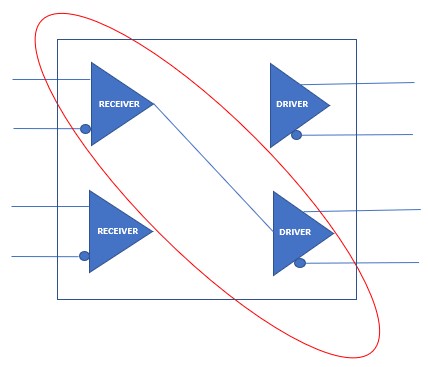 Basically, it works as a repeater designed specifically for bridging multiple backplanes in a system, accepting or driving signals onto the local bus.