The evolution of power distribution in the spacecraft goes into a modular architecture direction. Especially the secondary power distribution from the satellite bus to the modules can be made more efficient by applying modular design and standard power interfaces.

This requires new approaches in the design of the secondary power conditioning unit (power buses and local power conversion), so that can become more cost-efficient by lowering weight and volume, by increasing energy efficiency and by saving cost for development.

The first conversion stage may be regulated or not regulated at all, depending on the regulation of the source and the acceptable input range of the POL regulator. A tightly regulated system source would favor the selection of a loosely regulated bus converter. While the choice to use a first-stage converter that is not regulated can greatly improve the efficiency of the converter, the associated variation of bus voltage will be much higher. An unregulated bus converter output will vary in direct proportion to the input voltage. Ranges of +/-20% or more are common and depend on bus specifications. A POL regulator able to accept a wide input voltage range offers flexibility in efficiency optimization to the user.

Proximity to low-voltage digital loads such as FPGAs, ASICs, and DSP processors is critical because these loads can induce large load transients with rapid load changes while requiring tight voltage regulation coupled with high DC currents. So, a common requirement in many applications is the need for the final down-conversion to occur as close to the load as possible. Proximity reduces the parasitic inductances and associated line voltage excursions that can result from load transitions.

Low Dropout Regulators (LDO) are often the chosen devices when the load requirements are under 2 Amps or when an easy to implement solution is desired. High sensitivity RF amplifier applications also dictate the use of LDOs over a switching regulator due to output noise performance capabilities. A switching regulator is a great fit when stepping down to a low voltage or when the current requirement exceeds 2 Amps, needing a more efficient solution. As the power requirements and regulation tolerances are challenging, designers to look beyond what is available today. A POL converter is a step-down DC-DC converter positioned close to the load, offering a precise voltage supply while meeting low-voltage and large-current requirements. In addition, the power supply impedance is reduced, which in turn minimizes the interference between different voltages and unwanted electromagnetic radiation.

It is important to note when considering system level performance that the POL converter efficiency should not be considered by itself. Different POL converters require different levels of intermediate bus regulation and the more stringent the POL converter input requirement the less efficient the intermediate stage will typically perform. Stage conversion losses and interconnect losses between stages need to be included when calculating overall system efficiency. 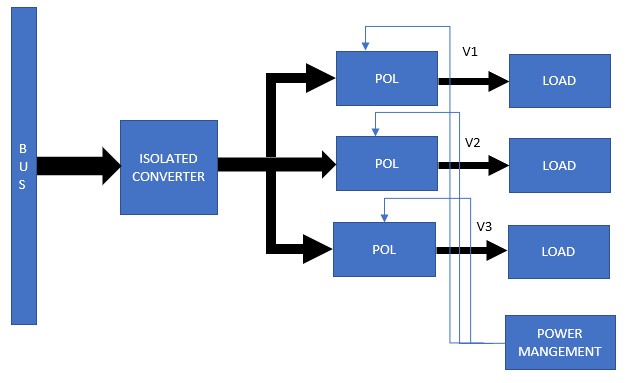 Bypass capacitor S-parameter models: What you need to know