It’s getting crowded up there. A recent article in the Pittsburgh Post Gazette (May 20, 2020) estimated that 2,200 operational satellites orbit our planet. But that pales in comparison to the anticipated 50,000 or more expected within the next ten years. This explosive growth is driven by the exponentially expanding demand for satellite navigation, internet, and telecommunications mega-constellations. SpaceX’s Starlink, Amazon’s Kuiper, OneWeb, and others are among the companies driving this vast expansion.

FROM THE SPACE RACE TO NEW SPACE

It all started in the mid-1950s when the U.S.S.R. successfully launched Sputnik. People all over the planet watched in wonder as this bright object made its way across the nighttime sky. And so, the “space race” began with space superiority taking on political-economic implications.

AT&T’s Telstar was launched in 1962, spawning its top-selling instrumental recording. About that same time, President John Kennedy called upon the nation to “commit itself to achieve the goal, before this decade is out, of landing a man on the Moon and returning him safely to the Earth.”

In its early stages, nearly all U.S. space activity was driven by government space exploration and military programs, with some exceptions. The Commercial Space Launch Act of 1984 recognized the private sector regarding launch vehicles, orbital satellites, and private launch services. 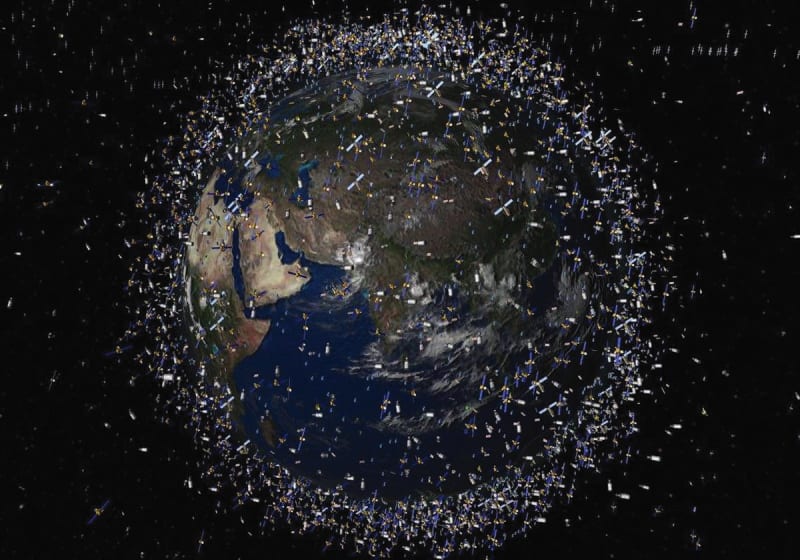 Early commercial satellites were deployed in geosynchronous (GEO) orbit. A circular geosynchronous (geostationary) orbit has a constant altitude of 35,786 km (22,236 mi). GEO satellites remain in a fixed position over the earth, allowing antennas also to stay fixed. The GEO orbit height allows communication over a wide area of the earth’s surface. An early example of a commercial GEO satellite launched in 1964, Syncom 3, was designed to allow Pan-Pacific coverage of the 1964 Summer Olympics in Japan. Today, many commercial applications utilize GEO, particularly systems employing large numbers of fixed receivers (e.g., DirectTV).

Medium-earth orbit (MEO) satellites, which occupy a wide altitude band from 2,000 to 36,000 km above the earth’s surface, are not geostationary. MEO satellites are only visible from any receiver for two to eight hours. Telstar is an early example.

The most significant growth in the crowded “Spacescape” is from the emergence of low-earth orbit (LEO) satellites, orbiting from 160 to 2,000 km above the earth’s surface. The low orbit results in a smaller footprint for signal reception, averaging 1,000 square kilometers. Satellites in this “new space” orbit move quickly, orbiting the earth every 90 minutes. LEO satellites are much less expensive (per satellite) to launch, use much less power, but need many satellites (clusters) to effect continuous communications with fixed antennas. OneWeb is an early example. 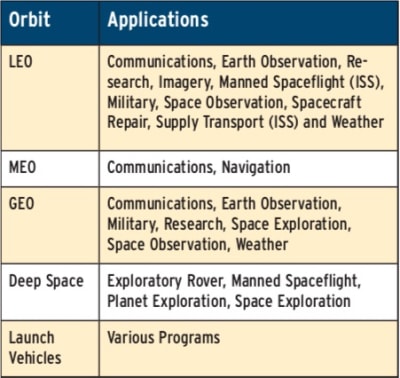 The range of applications for earth-orbiting satellites is quite extensive. Table 1 provides a general view of the types of satellite applications typically found in each orbit.

All satellites, regardless of orbit, require space-qualified electronic components. Reliability remains an essential component. Hardware is expensive to produce and launch, so redundancies are built into the design. “Services calls” are impossible, so parts must meet minimum performance and reliability criteria based on application, orbital location, and expected mission life.

Get instant access to millions of components in just one click. Go and find space-qualified crystal oscillators from Q-Tech on doEEEt.com!

Crystal oscillator packages are hybrid devices containing the tuned crystal and electronic circuitry. The types of devices can fall into several categories:

The remainder of this article will provide a survey of the key operational features and performance factors that must be considered in the selection of quartz crystal oscillators based on the application and orbital location, along with the four performance criteria shown in Figure 2:

Solar ionizing radiation exposure increases with the altitude of orbit and the resulting reduction on the atmosphere’s ability to absorb/reflect its effects. Ionizing radiation does not have an intrinsic effect on a quartz crystal. Still, as mentioned earlier, quartz crystal oscillators are hybrid devices combining the crystal with semiconductor devices and other components. Semiconductors are susceptible to degradation due to the ionizing effects of solar energetic particle events typically caused by solar flares.

The ability of a device to withstand the operational performance and expected longevity of operation is determined by the device’s ability to withstand a lifetime total ionizing dose (TID). TID is measured in kRad. The deeper into space, the higher the TID requirement. Typical ranges for TID are shown in Table 2: 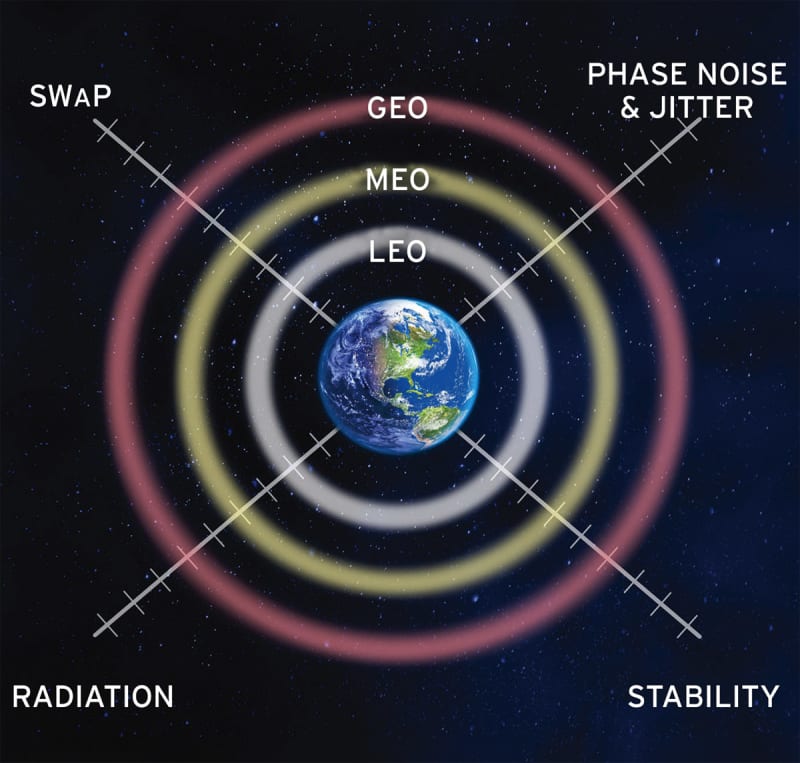 In some instances, manufacturers offer devices with TID specs higher than “typical” values based on the specifics of the application and expected life. For example, Q-Tech offers devices designed for deep space spec’d up to 300kRad and higher.

In addition to TID, some applications require devices to be tested for performance when subjected to spurious events, like cosmic rays or high-energy protons that can induce device latch-up or other functional interruptions, referred to as single events effects (SEEs). SEE testing can be time-consuming and expensive, but it’s necessary for many high-reliability applications.

Two significant factors drive the stability of an oscillator—the intrinsic stability of the circuit and the effect of temperature on its operation. 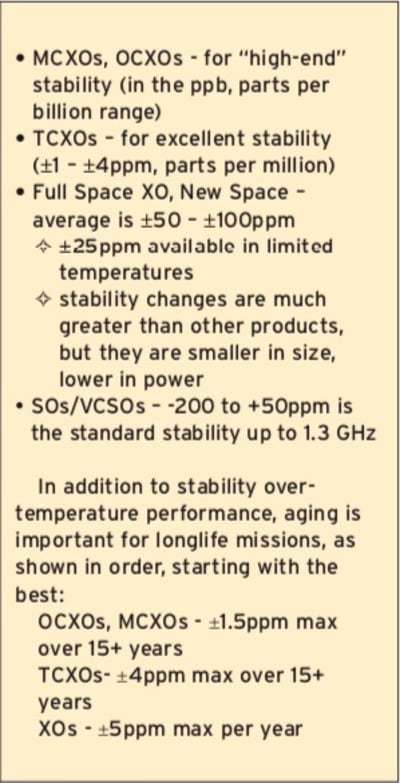 Stable frequency is essential in applications where the oscillator is utilized in navigation, communications, and other precise timing functions. The required degree of stability will be dependent upon both the precision of the procedure and the expected mission life of the system. Generally speaking, frequency stability for crystal oscillators follows the breakdown as described in Table 3.

Operating temperature variations grow broader as the distance from the Earth’s surface increases. LEO satellites experience a wide range of temperatures (-170 to 123°C) as they circle the planet and alternate between full exposure to the sun and total darkness. MEO and GEO satellites can experience external temperatures from -250 to 300°C.

All satellites include thermal management to keep the operating temperature within a tighter operating range of only -55°C to +85°C. Most crystal oscillators perform within spec over the entire temperature range, but sometimes stability options are chosen depending on a customer’s critical/targeted temperatures. For example, Q-Tech’s space-qualified MCXO offers ppb stability rivaling the performance of its OCXO, but with more diminutive size, weight, and power (~100 mW vs. multiple Watts for the OCXO). The MCXO uses a dual-mode overtone SC-cut quartz crystal. This self-temperature-sensing resonator virtually eliminates thermometry-related errors, yielding temperature compensation constituting a five-orders-of-magnitude improvement in temperature-induced change. 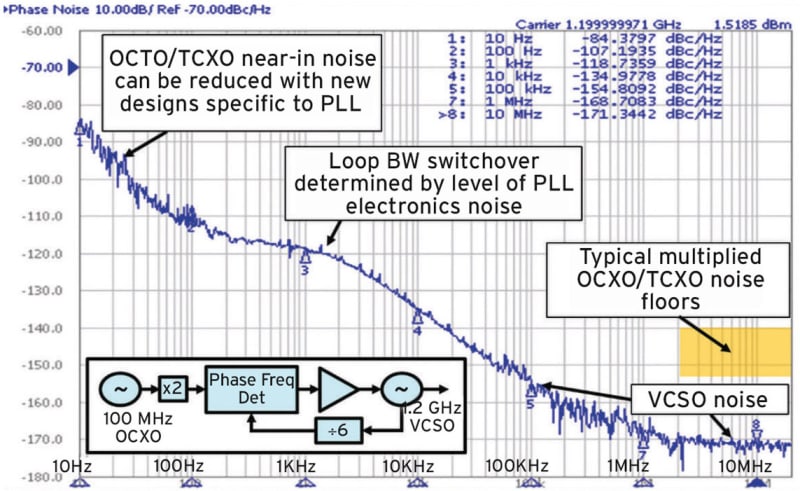 Figure 3. Phase Noise of an OCXO/TCXO phase-locked to a VCSO

As with stability, phase noise and jitter will vary depending on the device topology. In general, the hierarchy of performance is as follows:

SAW oscillators have great noise floors but lack close-in phase noise performance. To get the best of both worlds, phase-locked-loops (PLL) are used to provide a close-in performance of a TCXO or OCXO and the far-out (floor) performance of a VCXO. Figure 3 provides an example of an OCXO or TCXO module locked to a VCSO.

Until recently, it could be said that a decreasing SWaP “figure of merit” would apply for satellites deployed in more distant orbits and longer expected lifetimes. But with the advent of “new space” LEO constellations made up of hundreds and possibly thousands of smaller satellites (see Table 4), optimizing SWaP has become nearly a universal objective.

Remember to check in doEEEt.com any Space-Qualified Crystal Oscillators from Q-Tech

Smaller and lighter devices are often required as designers pack more functions into shrinking payloads. But the size of the package will also depend on other factors, such as stability and temperature. Package sizes typically fall into the following ranges, by type, and weight is directly related to size:

As would be expected, devices with temperature compensation or oven-control circuitry will require more power than a basic XO package: 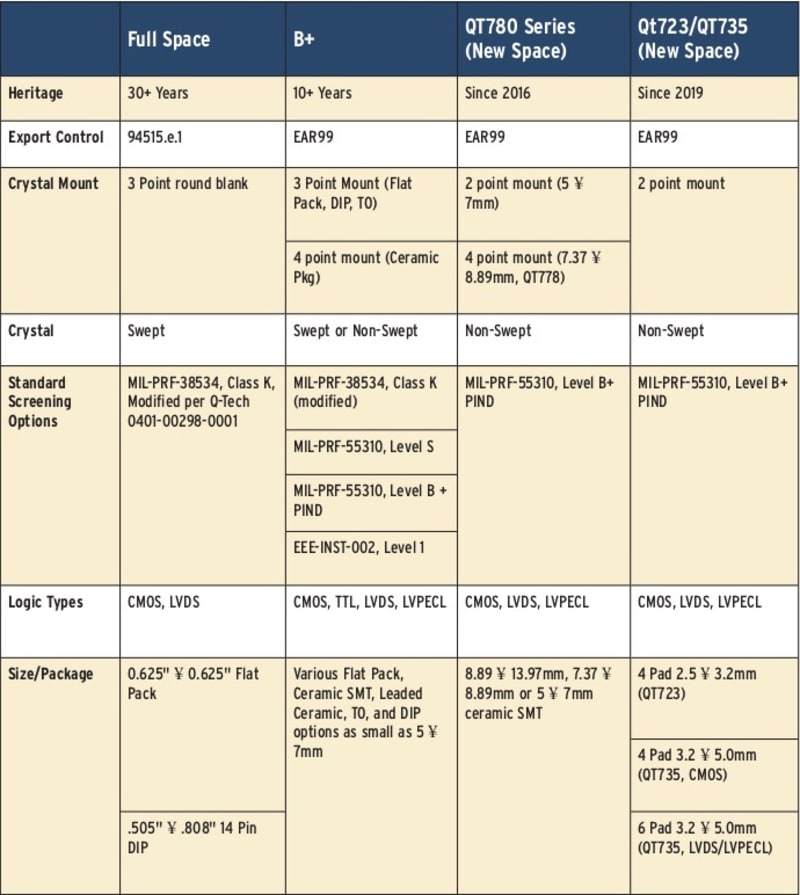 This article presents a broad overview of the critical performance parameters that must be considered when choosing the optimum quartz crystal oscillator for a space application. Table 5 provides a snapshot of the Q-Tech space-qualified parts series and pertinent details.

Regardless of the orbit and the application, numerous degrees of freedom will complicate the selection process. Ultimately, finding the proper quartz crystal oscillators for space applications will rely on close cooperation between the design engineer and the vendor.