The price of palladium has increased at an alarming rate, and now it is at a level that has not been seen in 25 years.

Palladium’s price has exhibited extreme volatility since 2012, with continual rises in price from August 2019 through January 2020 (see Figure 1). The price hit its 25-year high in January 2020 (see Figure 2) which created short-term forecasts suggesting an increase in production costs for specialty MLCCs. Further rises in price are expected in 2020

A platinum group metal largely mined in Russia and South Africa (among other locations), palladium is the primary metal of choice for reducing emissions in internal combustion engines through catalytic conversion. Palladium is also used as the primary electrode material in precious-metal based multilayered ceramic chip capacitors (MLCCs) which are, in turn, used in high-reliability, high-temperature and high-voltage product markets globally.

The market for these specialized MLCCs consists of between 300 and 400 billion pieces consumed annually – a small part of the volume for all MLCCs, but a large volume in comparison to almost all other component groupings.

High feedstock pricing impacts production costs for many MLCC manufacturers, especially smaller manufacturers. This is the primary motivating factor behind the movement to alternative electrodes and alternative MLCC designs in many end-markets, such as electronics used in fossil fuel engines, oil and gas, defense and space.

The recent spike in palladium prices is alarming from a cost issue, and the continuation of supply has become a concern as key markets compete for the metal. 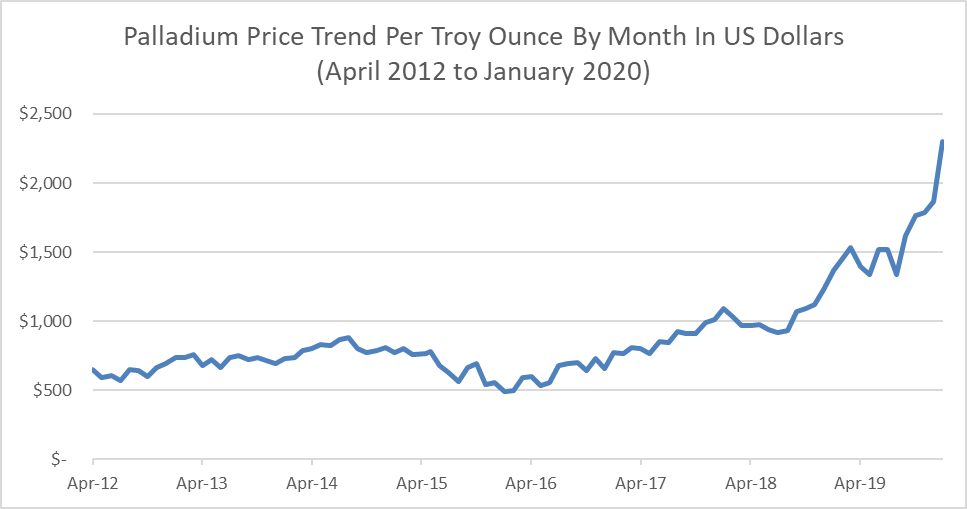 Source: Paumanok Monthly Report on Passive Electronic Components, January 2020. Note the recent rise in price; this is in response to real demand from the automotive industry to meet stringent emissions regulations for internal combustion engines in China and Europe in 2020. Electronics manufacturers will have to pay higher prices as a result. 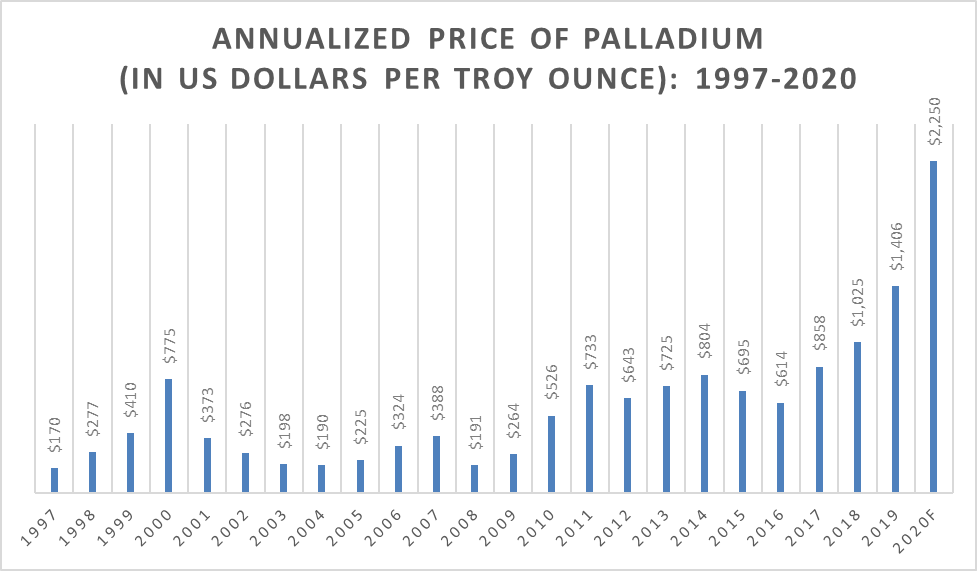 Source: Paumanok Research for this MarketEYE article, in conjunction with Johnson Matthey Databooks from 1997, 2013 and 2019.  Forecast for 2020 is from Paumanok data only. Note how the palladium price is at a new high.

MLCCs employ metals in the electrode and termination, and because of the specialty nature of the metals consumed, represent a significant segment of materials demand and costs to produce in passive components in 2020.

The MLCC market is the largest subset for materials vendors in dollar value and profitability, divided into platinum group metals (PGM) and base metal electrodes (BME).

When mixed with additives, the capacitors’ ceramic dielectric material is converted into a composition or formulation that communicates the performance characteristics of the finished capacitor to the electrical engineer (e.g. X5R, X6S, X7R, Y5V, COG. The variable in chemical matching systems may ultimately be determined based on the finished capacitor’s requirement for capacitance stability with temperature.

The trend over the last decade has been to modify the ceramic composition to allow for capacitance in a smaller chip case size. This sacrifices performance with temperature, voltage handling capability, ESR, IR and DF, which the design engineer must justify for the higher capacitance value.

This is, of course, the result of the extraordinary price of palladium in 2020, which is almost triple what it was 24 months ago and represents up to 50 per cent of the cost of the PGM ceramic capacitors in high-fire systems. This cost is quite prohibitive and uncompetitive against ceramic capacitors produced with base metal electrodes, which dominate the lucrative high-capacitance portion of the MLCC business.

The outlook for PGM ceramic materials – which are ultimately consumed in the more mission-critical applications such as automotive under-the-hood, aerospace, medical, oil and gas, satellites and infrastructure – is that costs will increase following the volatility of palladium electrode materials and silver terminations.

Those markets are controlled by the outcome of still other markets, most notably the catalytic converter markets in automobiles. Recently, metals processors in PGM were curious about why PGM consumption in passive components had increased in 2019 and why this had been not forecast by the industry. The opposite was forecast. It’s this change in forecasting that is creating volatility in metals.

Paumanok has helped track palladium consumption in electronics since the early 1990s. It is important to note that in 2000, the majority of palladium consumed was used in MLCCs, with only minor amounts consumed in hybrid integrated circuits and plating for connectors.

Between 1997 and 2001, there was a mass exodus away from palladium as an MLCC electrode because of the volatility of the price for the metal. This enabled the acceptance of alternative base metal technology, which also enabled the expansion of the technology from traditional picofarad capacitance levels into electrolytic microfarad capacitance levels. This change added more than $15 billion in market value to the supply chain in 20 years.

However, palladium MLCCs are still consumed in high-temperature, high-voltage and high-frequency applications, almost exclusively in the picofarad range. Where capacitance requirements are small but high voltages, high frequencies or high operating temperatures are part of the circuit design, then palladium-bearing MLCCs are almost always the solution for large quantities of distributed capacitance on the PCB. 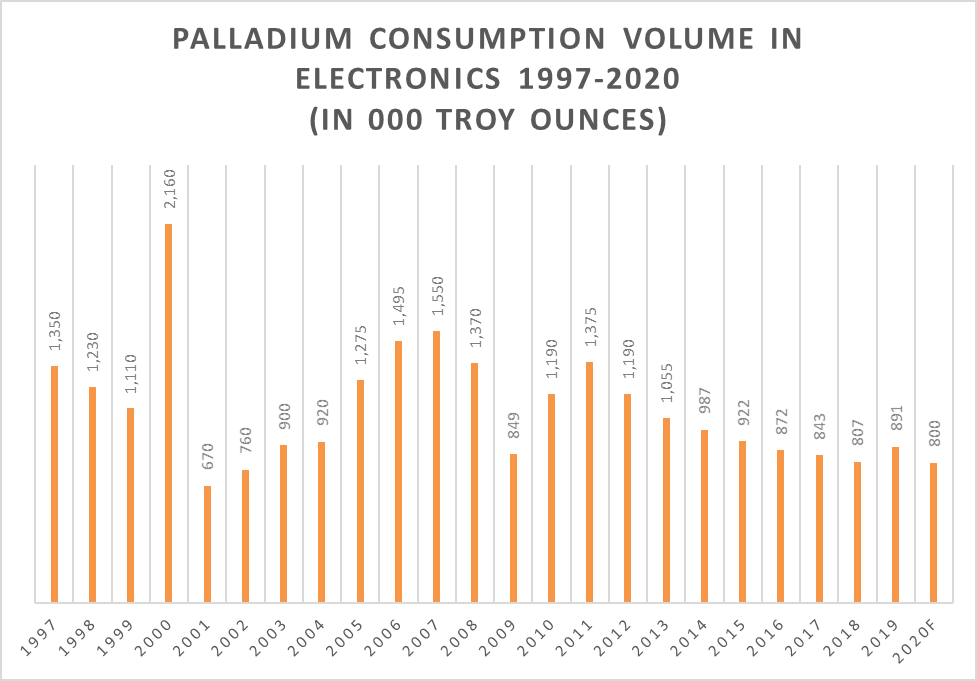 Source: Paumanok Publications, Inc. Estimates number the MLCCs containing palladium at between 300 billion and 400 billion pieces worldwide, with the majority of MLCCs produced today firmly nickel electrode. The use of palladium in high-reliability markets remains persistent and will be affected by rising palladium prices for CY 2020.

The electrode material markets for MLCC are complex, requiring multiple stages of consumption and added value that impacts the value of the metal as it ascends the supply chain, from ore to powder, to electrode.

For example, when an electrode powder is manufactured, the bullion charge for the ore is considered separately from the engineered material costs or the value-added. Quite frequently, MLCC manufacturers will buy their palladium bullion or sponge and give it to the intermediate powder manufacturer, who then produces a capacitor-grade electrode powder (either 100 per cent precipitated or co-precipitated with silver, depending upon the firing method).

The next value-added step in the production of the palladium electrode powder, which adds onto the original bullion cost due to the vertical integration through the application of paste or ink technology. Palladium electrodes are turned to paste so that they may be stacked intermittently with ceramic dielectric materials. Merchant vendors sell palladium paste to the MLCC manufacturers, although every major MLCC manufacturer also makes their pastes in-house. This requires the combined talents and disciplines of metallurgy and chemistry.

Impact on the Cost of Goods Sold for MLCCs

The metal’s price was further impacted in September 2019 by fresh fears of labor unrest in South African palladium mines, coupled with expected higher palladium loadings in autocatalysts designed to meet new stringent automotive emissions standards. Seventy-five percent of the world’s palladium is consumed in catalytic converters, so any positive movement in the Chinese automotive market will create higher prices for palladium.

The latest price of more than $2,200 per Troy ounce for palladium (see Figure 1) is extraordinarily high, creating a market spike in value that is expected to exceed the spike seen in electronics in 2000.

Variable production costs amount to about 75 per cent of the cost of goods sold, as found in various studies conducted by Paumanok Publications, Inc. (“Competitive Analysis of Passive Component Manufacturers”).

The variable costs associated with raw materials make up the largest single cost factor associated with producing MLCCs and thick film chip resistors. This encompasses ceramic materials, as well as electrode powders and pastes and the other materials related to terminations and coatings. Other variable costs include overhead and labour, but over 30 years, it has historically been the fluctuations in price and availability of certain metals that have had the greatest impact on MLCCs. These fluctuations pose the greatest risk of price increases for customers, and loss of profitability for component manufacturers.

The variable costs associated with raw materials make passive components somewhat unique: in whole or in part, the supply chain must rely on outside merchant market vendors and engineered materials processors to supply the engineered powders and pastes used in passive components. Historically, changes in metal prices and availability have proven to be the greatest risk factors in the cost of capacitor production.

As is shown in Figure 4, the forecast value of consumption for palladium ore in electronics is expected to increase 56 percent in 2020. 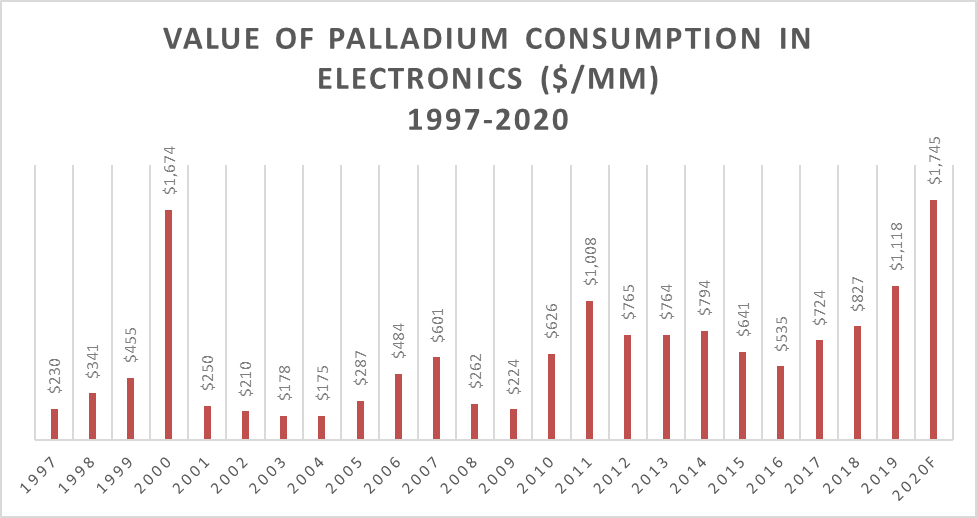 Source: Paumanok Publications, Inc. forecasts a 56 percent increase in the value of shipments of palladium in the electronics industry for CY 2020 due to limited supply of the metal and an expected surge in demand from the automotive industry after July 2020 to satisfy European and Chinese tightening of automotive emissions. The increased costs for palladium electrode materials will be a by-product of this competition for the metal, which remains in deficit of supply amidst large increases in consumption in markets outside of electronics in 2020.

The manufacturers of PGM type MLCCs will be faced with price increases for ore, powder and paste that will be substantial if the price holds and demand remains tight.

Tighter emissions for automobile emissions that are coming into effect in Europe and China this year will increase demand for palladium for autocatalysts, creating even greater pressure on palladium price after July. Electronics manufacturers consuming the metal will experience higher materials costs that will impact their bottom line throughout the year. Their ability to pass cost increases onto consumers will determine their profitability for 2020 in PGM-type MLCC markets worldwide.