Some energy losses within a capacitor can be attributed to the conductors while others involve the dielectric material. These losses vary mainly depending on voltage and temperature. The most common energy loss mechanisms include dielectric losses, ferroelectric losses, dielectric conduction losses, interfacial polarization, partial discharge losses, ohmic resistance losses, sparking between conductors, electromechanical losses, and eddy current losses.

Together with its capacitance value, ESR defines a time constant for charging and discharging of the capacitor and thus how quickly the capacitor reacts on voltage/current changes/ripple. In practical smoothing applications, capacitor technologies are combined in parallel, where high capacitance parts are taking care of bulk filtering (aluminum or tantalum capacitors) and small MLCC capacitors with low ESR are taking care of fast, high-frequency spikes.

Different dielectric materials respond differently when voltage is applied or removed. Dielectric losses are associated with how dielectric materials polarize or relax in response to voltage. The magnitude of these losses depends on both temperature and frequency. The dissipation factor (DF) is commonly used to describe the dielectric losses of material. The dissipation factor and equivalent series resistance of a capacitor are dependent on the electrodes as well as their configurations. In film capacitors, dielectric losses are the main contributor to the overall equivalent series resistance.

Note: Lowest ESR capacitors are not always the best choice. Too low ESR of capacitors in certain applications such as feedback capacitors could eventually cause some issues with the operating amplifier oscillations out of operating conditions. LDO type circuits have been also very sensitive on capacitor ESR range (including a shift of ESR with temperature !) and historically tantalum capacitors were strongly recommended to use with LDO instead of MLCCs with too low ESR values. These issues are typical for an older generation of ICs, the latest ICs with continuous improvement of design architecture and components are significantly less sensitive to capacitors’ ESR values. However, it is always a good idea to check the IC chip datasheet. 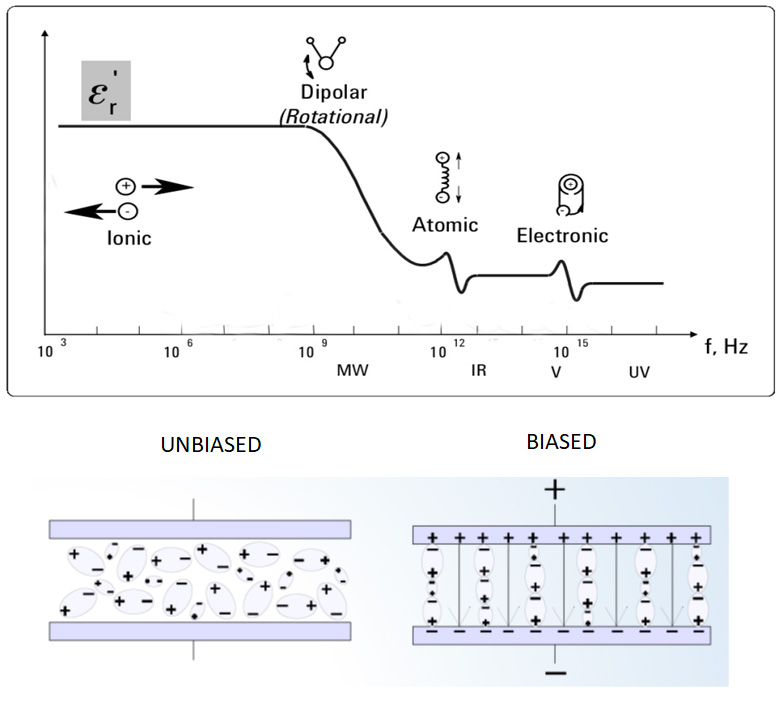 Fig.1. Polarization mechanisms and alignment of dipoles with voltage applied.

Metallic terminals, electrodes, and internal wiring of capacitors exhibit resistance. This energy loss does not vary significantly with temperature and frequency. However, at high frequencies, the skin depth effect in electrodes becomes significant. Although ohmic resistance losses occurring within terminals and internal wiring are insignificant in low current applications, they should not be ignored in high current applications. 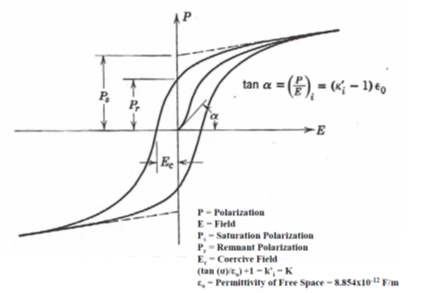 Fig.2. Ferroelectric materials (BaTiO3 as MLCC classII dielectric) exhibit some hysteresis in polarization as a function of electric field

The dielectric systems of most high voltage capacitors have at least two different materials. Each of these materials has different permittivity and conduction properties. This difference in properties causes accumulation of charge at the internal interfaces of such materials when a DC voltage is applied. Interfacial polarization losses are common in low-frequency high voltage capacitors.

In most capacitors, electromechanical losses occur mainly within the dielectric material and the internal wiring. In the dielectric material, electromechanical losses are primarily caused by electrostriction. In some cases, it may be caused by a piezoelectric effect. In internal wiring, Lorentz forces can cause flexing. When this happens, it leads to energy losses.

The dielectric losses in ceramic capacitors mainly depend on microstructural factors, dielectric formulation, and concentration of impurities. Porosity, morphology, and grain size are the main microstructural factors that determine the equivalent series resistance. The loss factor varies from one dielectric material to another. Excess losses can cause the dielectric to heat leading to thermal breakdown and capacitor failure. In ceramic capacitors, dielectric losses are predominant at low frequencies. At high frequencies, these losses diminish and their contribution to the overall ESR is negligible.

High ESR values can lead to excessive power loss and shortened battery life. Using low loss capacitors in coupling and bypassing applications helps to extend the battery life of portable electronic devices. In RF power amplifiers, it is easy to attain high efficiency and increased power output with low loss ceramic capacitors. Use of high ESR capacitors lowers the efficiency because a large percentage of power is wasted in the form of ESR loss.

Oxide losses in tantalum capacitors increase slightly with an increase in temperature. In comparison, the resistance of manganese dioxide decreases with an increase in temperature. Furthermore, manganese dioxide resistance losses vary depending on manufacturing procedures, and they are complex to analyze. Conductive polymer tantalum is featuring lower ohmic resistance losses – lower ESR – compare to MnO2 conventional types and it has practically no change of ESR with temperature, unlike MnO2 where ESR at negative temperatures can be around 10x higher compare to those polymers.

At low frequencies, notably below 1 Hz, dielectric absorption and leakage current have a significant effect and should be considered. Generally, in a typical tantalum capacitor, ESR decreases with an increase in frequency. ESR affects the performance of tantalum capacitors in many ways. To start with, its resistive effect causes heating in capacitors. Secondly, ESR increases impedance in circuits, thereby making tantalum capacitors less effective for decoupling and filtering applications.

Polymer and hybrid (combining polymer and wet electrolyte) electrodes with significantly lower and more stable ESR are available on the market as well, that address most of the disadvantages of the wet electrolytic capacitors reducing the ohmic losses, dry out effect (reliability and stability improvement) and ESR temperature dependency. 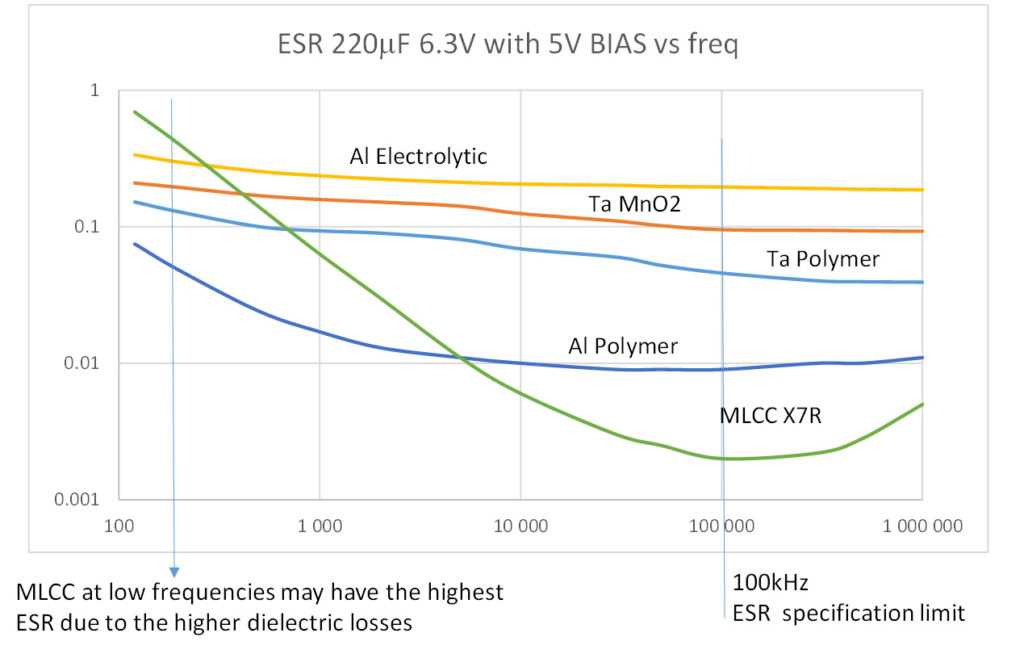 ESR is used to characterize capacitors losses mainly in the higher frequency domain with standard reference frequency at 100kHz. ESR with a frequency chart is illustrating losses in the entire frequency spectrum. As discussed above, the low-frequency losses below around 1kHz are driven by “slower” polarization and losses in dielectric layers, mid frequencies (~ 1kHz to 10kHz) are driven by internal construction losses (such as conductivity of internal structure and electrolyte), the high frequencies >100kHz are driven by mostly ohmic losses of terminations, contacts, etc.

Referring to Fig.3. MLCC capacitors are exhibiting lowest ESR values compare to other technologies referred to a standard specification frequency 100kHz thanks to its multilayer structure. This is beneficial for smoothing of higher frequencies and fast spikes for applications such as switching power supplies. However, at low frequencies, MLCC class II capacitors are featuring higher ESR(and DF) compare to other technologies. Thus in a practical example in case of low-frequency spike present (such as 50-216Hz often seen), it is more efficient to use the MLCCs in parallel with some aluminum or tantalum electrolytic capacitors.

Just like other physical devices, capacitors are not perfect or ideal components. The materials that are used to construct capacitors have finite electrical resistances. As such, capacitors contribute some resistance to a circuit. The real part of the complex impedance, equivalent series resistance, is a sum of energy loss mechanisms that occur in a capacitor. These small losses can become significant when the device is made to operate under certain conditions.
Some of the conditions that can significantly affect the behavior of a capacitor include high current, high frequency, and extreme temperatures. Whereas frequency, voltage, and temperature can affect the performance of a capacitor, only frequency affects ESR. When designing a circuit, it is, therefore, critical for the design engineer to consider the frequency of operation of the circuit as well as the temperature of the components.