In its push to become climate neutral by 2050, the European Commission this week unveiled an industrial strategy called the “Clean Hydrogen Alliance.” The public-private partnership between the EC, Europe’s fuel cell and hydrogen industry and research organizations will drive the region’s efforts to ensure Europe’s energy independence and develop zero-emission cars.

The Commission presented on 10 March 2020, a new European Industrial Strategy to help Europe’s industry lead the transition towards climate neutrality and digital leadership.

The Strategy sets out the key drivers of Europe’s industrial transformation and proposes a comprehensive set of future actions, including a Clean Hydrogen Alliance to accelerate the decarbonisation of industry and maintain industrial leadership.

Smart sector integration is a key part of the new strategy, as it aims to use all carriers of energy more effectively, by linking different sectors. Clean Hydrogen is a prime example of where this can have a real benefit. It is disruptive in nature and requires stronger coordination across the value chain.

The Alliance will bring investors together with governmental, institutional and industrial partners, building on the successful template of existing industrial alliances, and on the work done within the framework of the FCH JU.

“We welcome the proposal of a Clean Hydrogen Alliance, which can exploit all benefits that hydrogen can bring to the EU economy and jobs. This initiative is a clear evidence of the success of our public private partnership and we will actively support it ” said Bart Biebuyck, FCH JU Executive Director.

One of the major focus application are hydrogen powered clean cars. The topic is discussed by Maurizio Di Paolo Emilio in an article published by EETimes:

From electric vehicles to hydrogen-powered cars?

The universal goal for the next-generation vehicles is cars that produce less harmful substances and less noise. The whole world is experimenting with electric vehicles (EV). One of the drawbacks of EVs, which belong to the electro-mobility sector, is that they have long charging times.

That’s a problem that might be solved by hydrogen fueling, also called cell fueling. Hydrogen cells exploit the same energy used by spacecraft to reach the Earth’s orbit. But how do hydrogen cars work? What are the strengths and weaknesses?

The hardware of a hydrogen vehicle

Hydrogen vehicles convert chemical energy into mechanics. Hydrogen can burn directly into an internal combustion engine, and in this case, we have a vehicle with a hydrogen internal combustion engine called HICEV. Or it can be used to cause a reaction with oxygen in a fuel cell, thus producing electricity. This type of vehicle is called FCEV (fuel cell electric vehicle) and, in recent years, FCEV has drawn the attention of many manufacturers.

FCEVs are powered by an electric engine and have an on-board power plant to allow the production and management of hydrogen. The environmental impact of hydrogen-powered cars is shallow as they do not generate polluting emissions (greenhouse gases, fine particles, etc.) but only water vapor (Figures 1 and 2).

Featured Figure 1 above: block diagram of a hydrogen car. In the fuel cell, hydrogen and oxygen generate electricity which is conveyed to the electric motor and/or battery [Source: BMW] 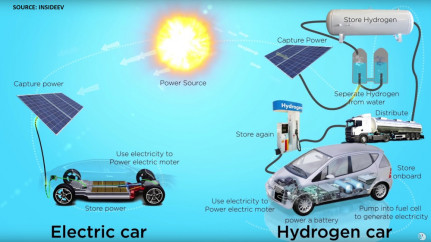 Hydrogen can be produced through two different production processes and technologies: reforming and electrolysis. Reforming has a higher environmental impact because it involves the extraction of crude oil, transportation, and refining. Electrolysis is the process of splitting H2O water molecules into individual hydrogen and oxygen atoms via the chemical reaction induced by electricity. This production process does not emit polluting gases but requires a large amount of power. The electrolysis process consists of a low voltage current that flows through the water to release oxygen and hydrogen in a gaseous form.

Figure 1 shows a general layout of a hydrogen vehicle. Reverse electrolysis takes place in the fuel cell: hydrogen comes from a tank, air from the surrounding environment. Fuel cells do not provide for thermal combustion but an electric current that produces non-altered water as the only waste.

Fuel cells receive two incoming flows: hydrogen from the negative pole and oxygen from the positive pole. The catalyst contained in the hydrogen engine causes the electrons to separate from the nucleus, and this reaction releases electricity. The electrons move to the positive pole and join the oxygen atoms, which receive a negative charge. The union of hydrogen with oxygen produces a chemical reaction whose final product is water. What is emitted is water vapor, which can be released directly into the atmosphere by hydrogen cars (Figures 3 and 4). 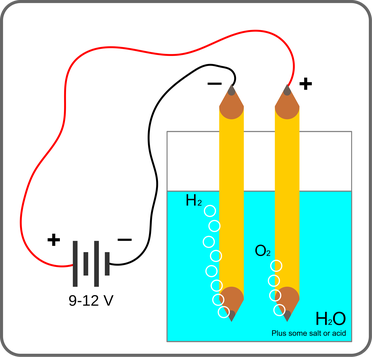 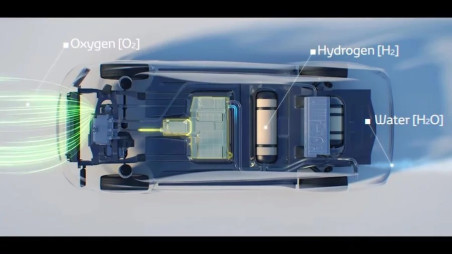 The current generated in the fuel cell can directly power the vehicle or charge a battery smaller than a classic car that acts as an intermediate accumulator. As in other hybrid vehicles, hydrogen-powered vehicles also use energy harvesting to recharge the battery. In particular braking energy. The battery is used to cover possible engine energy demands and to recover braking energy just like electric and hybrid cars do. The voltage produced by fuel cells must be up to 600V.

At low speeds, the car moves and obtains energy only from the battery. In contrast, at higher speeds, e.g., on a highway, the fuel cell brings extra power to the engines and, at the same time, recharges the battery.

The advantages that hydrogen fueling can bring are maximum reduction of emissions (water is the only waste product), speed of refuelling, reduction of consumption, and prolonged autonomy. But there are also disadvantages related to the problematic management of hydrogen, from electrolysis techniques that require electricity to storage in filling/charging stations. A problem in hydrogen production is given by the losses caused by electrolysis.

One the downside, you cannot refuel/recharge anywhere; in fact, many of the problems are due to the difficult storage of hydrogen, which, as a result, today can count very few distributors. And, as mentioned above, the process of separating hydrogen can be energy-intensive.

The storage of hydrogen requires a lot of space compared to that needed for petrol or diesel. The hydrogen tank must be strong enough to withstand pressures of around 700 bar. Hydrogen is stored in gaseous or liquid form at -253 ° C.

The refueling infrastructure, mostly non-existent today, would require significant economic investments. Furthermore, the production costs of a fuel cell vehicle are considerably higher than a conventional one.

Hydrogen cars have greater autonomy. A tank full of hydrogen is sufficient to cover a distance of around 500 kilometers. Cars powered by a battery only reach this value if they are equipped with huge batteries, but this will result in higher vehicle weight and longer charging times.

Market examples
Germany is the leading country in Europe that is focusing on hydrogen-powered cars. In December 2019, in fact, there were about 80 refueling stations for hydrogen cars in Germany.

Numerous manufacturers, such as Ford and Renault, have ventured into making hydrogen-powered cars even though they have preferred to direct their resources towards electric vehicles. In contrast, others, such as Toyota, have continued to develop this technology until this type of vehicle was built and marketed.

The Toyota Mirai uses the Toyota Fuel Cell System (TFCS) and offers both fuel cell technology and the one that is typical of hybrid electric cars. Another hydrogen car is the Honda Clarity Fuel Cell. The Japanese sedan can cover a distance of 650 km and a maximum speed of 165 km per hour, thanks to the 177 horsepower of the innovative engine. Audi H Tron, BMW i Hydrogen Next and Hyundai NEXO are of particular interest among hydrogen cars.

Hydrogen cars consume an average of 1 kg of fuel per 100 km. The average price of hydrogen is 10 euros per kg: it can be assumed that a full tank can cost around 50 euros, while the average distance can be compared to the one of a petrol car. 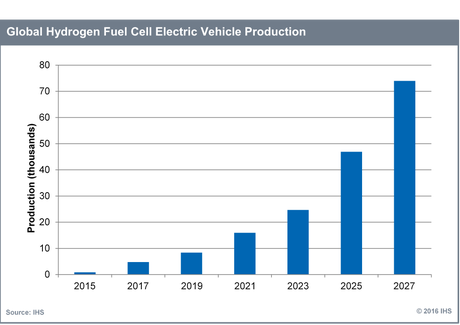 Hydrogen makes an essential contribution to the sustainable mobility of the future, alongside cars powered by a battery. FCEV cars can represent zero-emission technology and allow users to maintain their flexible driving habits. Hydrogen can be up to twice as efficient as gasoline. But, We must improve hydrogen production through renewable solutions. It is essential to reduce infrastructure costs for transport and distribution.