SAL-capacitors were developed and introduced in the market in the 1960s by Philips. Up until December 30, 2015, it was a single source product manufactured by Vishay.

As of December 31, 2015, the SAL is end-of-life and have ceased production. Nevertheless, we still list the technology features here for comparison and overview.

The electrolyte is a solid one. Thus, life is independent of drying effects and leakage currents and theoretically unlimited. Storage has no impairing effect on the dielectric. The stability is much better than that of wet types. The capacitance tolerance is ±20%. The price is high.… Compared to solid tantalums the price for solid aluminum (Al) electrolytics of the same CV product is between two and three times higher. The solid electrolyte doesn’t penetrate the pores of the highly etched aluminum foil equally well as a wet one. Its conductivity, however, is between one and two orders of magnitude larger than that of the wet electrolyte and its temperature dependence smaller.

Thus, the solid Al electrolytic is relatively insensitive to the pore effect that in wet Al electrolytics creates a deep network of series and parallel resistances as was shown in Figure C3-13. The capacitor can’t stand any breakdowns. This requires large margins between the forming and rated voltages. The forming rate usually is 2 to 3 times and the rated voltage maximum of 40 V DC. Unlike solid tantalums, the capacitor is relatively insensitive to pulse loads which, among other things, depends on its higher ESR that reduces the need for an additional circuit impedance. 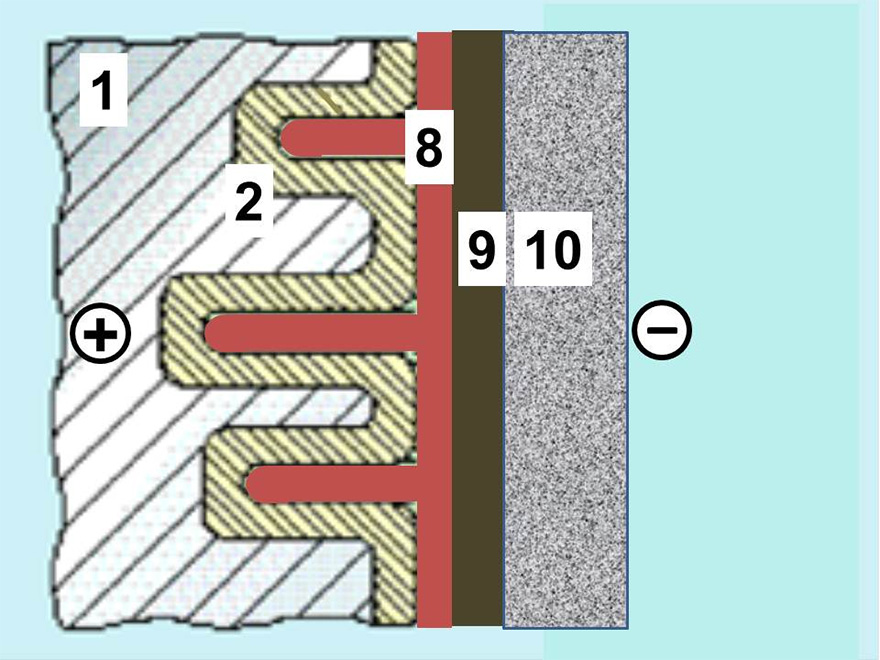 Nevertheless, just as in solid tantalums, very high pulse currents can initiate a fire. There were two construction styles on the market, the epoxy encapsulated radial types for maximum 175 °C and the axial aluminum can type designed for maximum 200 °C. The radial lead design has a stacked aluminum plate construction which renders a very low ESL (equivalent series inductance). It ranged from 9 to 20 nH. The cylindrical can has a winding of anode and cathode foils plus glass fiber spacers. The reliability of the cylindrical can types is high. Of these, there are designs with epoxy fillings intended for extreme acceleration and shock stress.

Both the radial and axial lead types are represented in Figure 1. 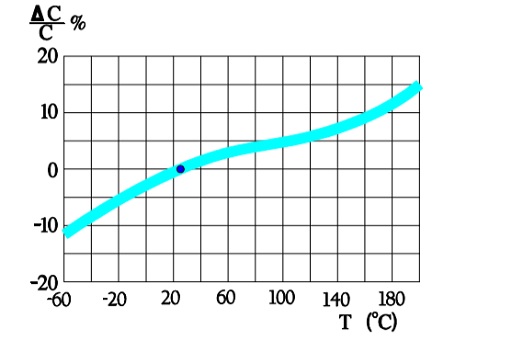 In comparison with wet aluminum electrolytics,  ESR of the solid ones has a less pronounced temperature dependence as shown in Figure 2. 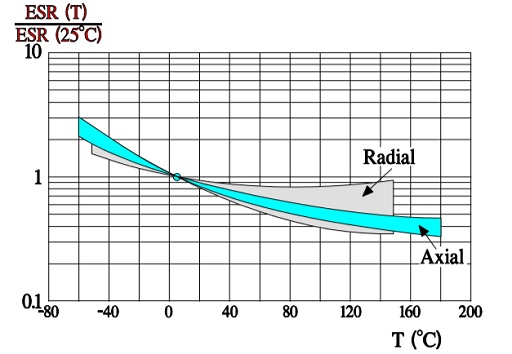 ESR versus frequency Typical normalized diagrams are shown in Figure 3 and 39. The former concerns the radial lead designs with their lower ESL and higher operating frequency range. 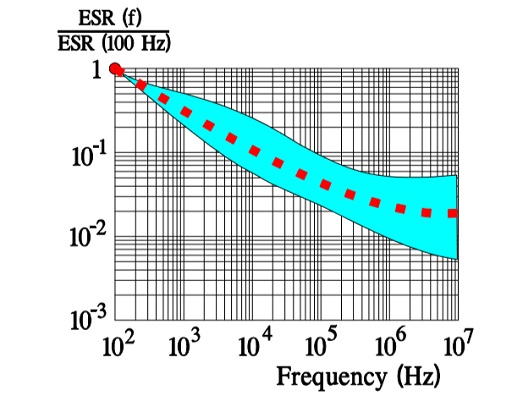 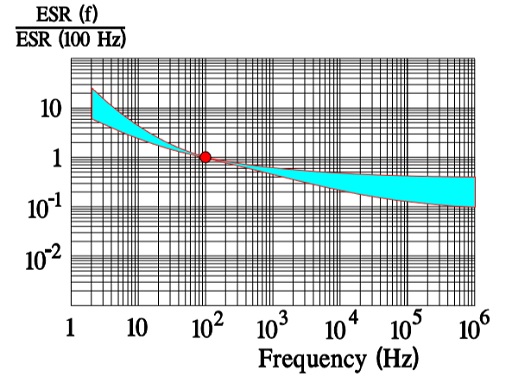 The ESR characteristics are poorer than those of solid tantalums, especially at cooler temperatures. In other words, the impedance curve levels off and touches the ESR bottom at lower frequencies in solid Al electrolytics of comparable sizes. 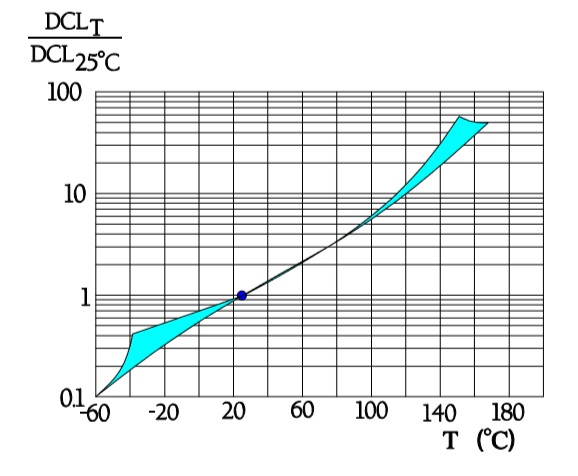 The permissible reverse voltage is stated to be:

Epoxy-dipped types with radial leads are sensitive to mechanical forces applied on the leads at mounting. Inappropriate handling results in an increase in the leakage current. 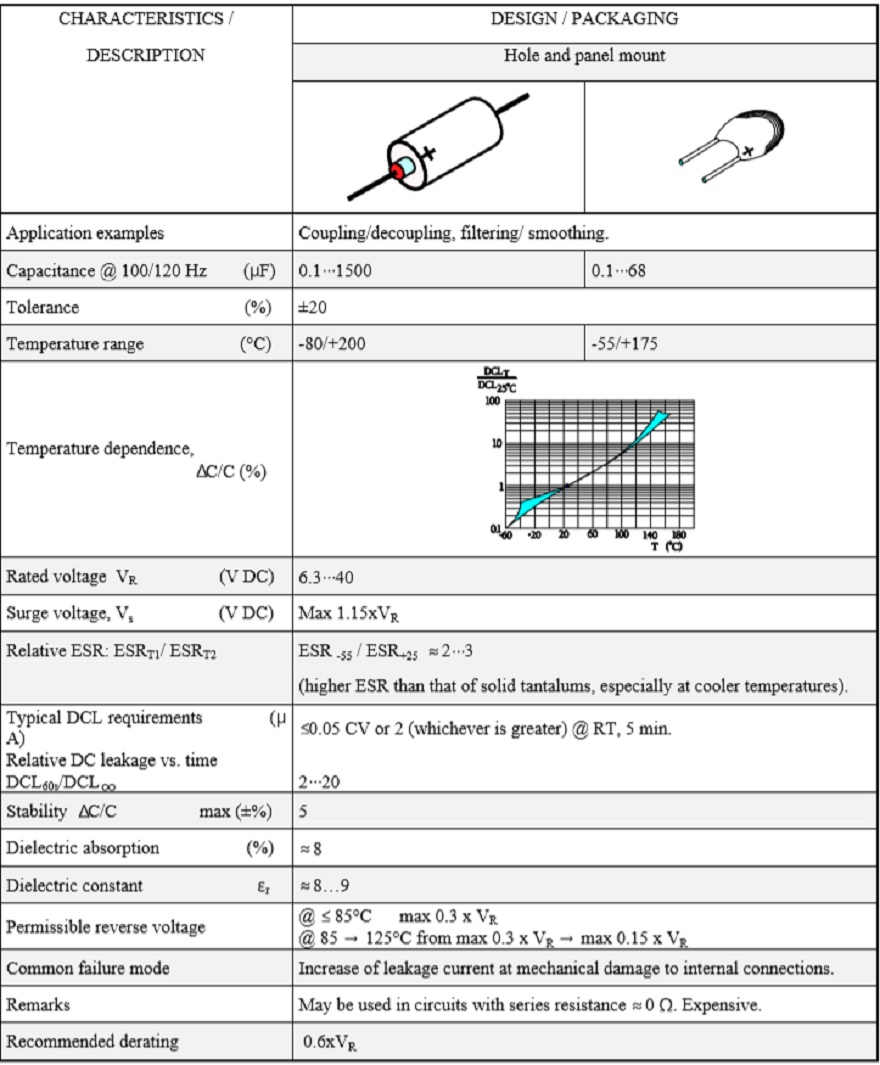