This essay will explain how, over the last decade, supply chain risks in the tantalum industry have decreased considerably and, as a result, consumers of tantalum can have greater confidence in the reliable supply of tantalum, both now and in the future. This is important, as recent trends in the electronics market, and structural changes in capacity availability for certain capacitor types, have caused the market to turn to tantalum-based capacitors to fill the gap.

The T.I.C. is the global trade association that represents the tantalum and niobium industries. We are a not-for-profit organisation listed in Belgium and have been active since 1974. We have 90 member organisations from 30 countries. Our members are involved with all aspects of the tantalum and niobium industry, from mining and refining through to capacitor and metallurgical products manufacturing and scrap recycling. Our membership includes several of the key capacitor companies, including KEMET and Vishay.

Our MISSION is to promote the interests of the tantalum and niobium industry and we achieve this through our work to:

This is just a flavour of our work and of course there is perennial stakeholder outreach to increase awareness and promote the remarkable properties of tantalum and niobium. Including our hosting of the Anders Gustaf Ekeberg Tantalum Prize, an annual award that recognises excellence in tantalum research. The prize is awarded by an independent panel of experts, which includes Dr Tom Zednicek of the EPCI. 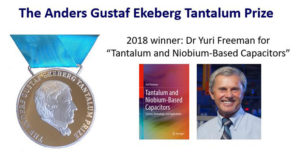 The 2018 winner was Dr Yuri Freeman for his landmark treatise “Tantalum and Niobium-Based Capacitors”. Should you wish to submit or recommend a publication for consideration for the 2020 Ekeberg Prize, then please contact the T.I.C. by May 31st 2020. Full details about eligibility and the judging process are available on our website. The T.I.C. also publishes a quarterly tantalum-niobium newsletter – The Bulletin. It’s full of facts on the tantalum and niobium industry and it’s free to subscribe.

Tantalum resources around the world

Although Tantalum (Ta) is a relatively rare element in nature, it is widely distributed across the world. There are many “resources” of tantalum around the world. A comprehensive survey in 2010 estimated the ‘likely’ reserves are around 318,000 tonnes of Ta2O5, with the largest likely resources found in South America and Australia.

Note that not all the underlying data was to JORC standards and in central Africa, the geological record is incomplete and certainly underestimates the total global reserves. It is a well-recognised fact that African production of tantalum ore has been historically underreported and geologically underestimated. Even so, known likely resources are equal to at least 100 years at current levels of consumption. Very few other commodities have that sort of resource base.

How due diligence stabilised tantalum supply

Historically tantalum supply was dominated by a handful of large mines, the largest of which were in Australia, with others located in Africa, Canada, China and Russia. For several decades up to 2008 around half global supply was produced by just one company in Western Australia called Sons of Gwalia. They were the single largest producer and the most stable producer. They were the only producer with a real marketing budget and fundamentally controlled much of the tantalum business.

For many years Sons of Gwalia sold tantalum concentrates on long-term contracts to leading Western refineries, but in 2004 Sons of Gwalia was driven into bankruptcy as result of guarantees made by their gold-mining division, that they could not deliver. The tantalum mines were bought by a venture capital fund and production continued even as mining moved from open pit to underground operations, which are generally much more expensive to operate. Business was good for a while, but in the late 2000s rising costs and falling ore grades forced Sons of Gwalia to suspend operations, and total global mine production fell dramatically.

Africa has always been an important, although under-reported producer of tantalum units and since 2010 an increasing amount of material has come from central Africa, much of it from artisanal and small-scale mines. This trend has steadily increased as mineral traceability programmes have become established in central Africa from 2011 onwards.

What allowed artisanal and small-scale mines in central Africa to take off so quickly was that in comparison to the high cost of hard-rock mining in Australia and Brazil, the deposits in central Africa are highly weathered. When rock is decomposed by natural processes over time the tantalum-bearing tantalite crystals remain largely intact.

Such rock can be processed with a straightforward washing process and yield 85% of the tantalum units, a far higher recovery rate than the 50 to 60 % recovery rates at hard-rock mines that blast and crush the ore. Artisanal mines may only produce a few tens of kilos of ore per week, and while none of these artisanal and small-scale mines are, of themselves, of any significance, as a whole they make up an important part of the market, in that they can come ‘on stream’ or shut down at a moment’s notice, increasing supply as soon as prices rise and vice versa. In doing so, they further add to market stability.

That is, of course, only half the story of central African artisanal and small-scale mining. The other half of the story concerns the conflict-mineral legislations and mineral traceability programmes that created a framework for supply chain due diligence that was able to stabilise tantalum supply in central Africa. Due diligence essentially is the process of confirming that the minerals and metals you buy have been mined and processed responsibly. Due Diligence and Transparency, as fundamental concepts, are of the utmost importance to the tantalum industry.

The foundation stone of due diligence is the OECD Due Diligence Guidance, now in its third edition. The key piece of legislation supporting the OECD guidance was section 1502 of the US Dodd-Frank Act, first implemented in 2012 and still operational today. Dodd-Frank requires US companies that file with the SEC to confirm the conflict-free status of any tin, tantalum, tungsten and gold minerals – so called 3TG – that are sourced from the Democratic Republic of Congo or its neighbours.

To be able to comply with the OECD and Dodd-Frank requirements, industry set up mineral traceability programs. It was quickly recognised that smelters and refiners are the pinch point in the supply chain. If they could be audited and shown to be conflict-free, then it is expected that all their customers would also be conflict-free. Smelter audits were set up by the Responsible Minerals Initiative (formerly CFSI), and as you can see here, the tantalum industry led their adoption as standards. 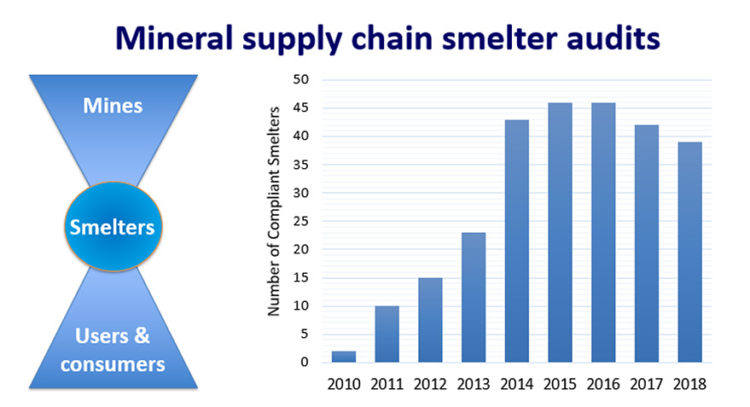 To support the smelters, on the ground programs were needed, to monitor conditions at mines and provide mineral traceability data and risk reporting to the smelters for their audits. The leading program is called ITSCI. It was jointly established in 2011 by the tantalum and tin industries, once again tantalum showing leadership in this initiative. ITSCI is governed by the tin and tantalum trade associations, T.I.C. and ITA, and managed on the ground by Pact and a network of several hundred government employees, local civil society and business organisations.

Today central Africa provides legitimate and ethical tantalum, which is cost competitive as a result of the nature of the highly-weathered deposits found there. ITSCI works across four central African countries. The territory it covers is slightly larger than Germany, but with few good roads, making logistics a constant challenge. And yet it works because it has the buy-in from the governments, businesses and communities who host it. It covers over 2000 mines, giving gainful employment to over 80,000 miners, and supplying over 2000 tonnes of tin, tantalum and tungsten minerals per month, all of which provides considerable tax revenues for the local and national governments in the region. 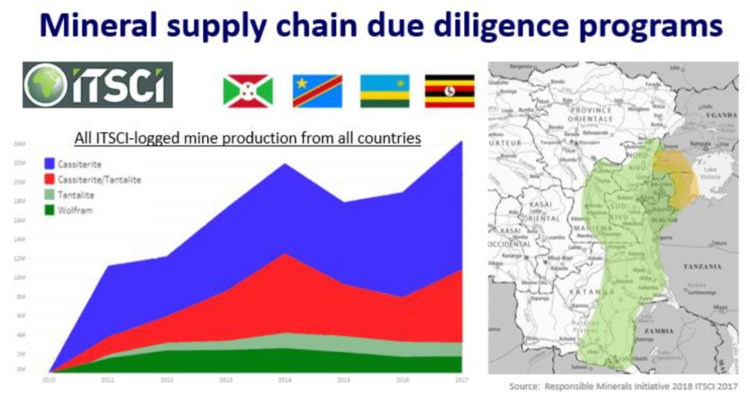 Clear proof of how mineral traceability programs have created a stable business environment in central Africa can be seen in the investments being made across the region. What we are seeing on the ground is that, as a direct result of ITSCI and the other programs offering a legitimate route to market, the artisanal mines are investing to become small mines or even semi-industrial mines. This mine is in Rwanda. It joined ITSCI in 2011 as an artisanal site, and by 2015 had invested in a mechanized washing facility.

There are several large mines in Kisengo in southern DRC, which have invested in heavy earth-moving equipment and a industrial washing facilities. This investment would not have happened without industry having the confidence that central Africa has become predictable and stable; a belief that has been reinforced by the recent peaceful election in the DRC. 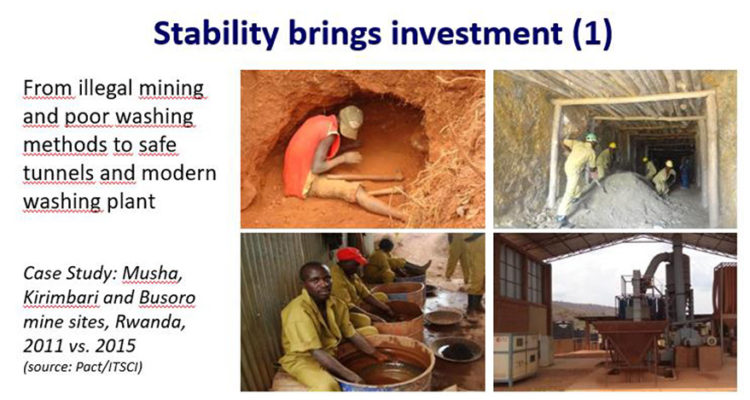 Participants at every level appreciate that legitimate, conflict-free trade is the only way to gain access to the global marketplace. Mineral supply chains in central Africa today are responsible by choice. They operate mature and robust traceability systems and this is likely to only improve further with the introduction of blockchain technology to mineral traceability systems. 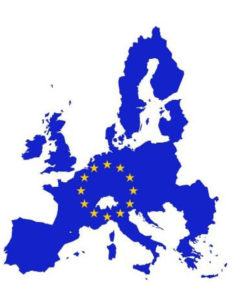 The next big development in this subject will be the European Union’s conflict mineral regulation, due to come into force on January 1st 2021. The key difference with Dodd-Frank is that the EU regulation will apply to imports to Europe of 3TG from anywhere in the world, not just the DRC and neighbouring countries.

The regulation is based very closely on the OECD’s guidance and will further normalise mineral traceability in supply chains. The good news is that there is going to be a lot of support for affected industries to make compliance as painless as possible. This will include providing detailed guidance about how to define conflict-affected and high-risk areas, for example, the Heidelberg Conflict Barometer. The EU regulation is confirmation that mineral traceability systems are robust, mature, and here to stay.

In Brazil two important mines hope to increase production and a number of new players are investing in lithium mines which could produce tantalum as by-product. AMG’s Mibra operation has now been fully rehabilitated following a disastrous fire in early 2017 and their expanded lithium production could generate additional tantalum units. Minsur’s Pitinga mine also plans to expand and increase its production of niobium-tantalum ferroalloy. Both of these mines also contain significant tin content. Some analysts are forecasting that by 2024 South American supply could have doubled its global market share, to over 30%.

Demand for lithium is increasing rapidly on the back of growth in electric and hybrid vehicles. Traditionally most lithium has been produced from South American brines, but producing lithium from brine is a slow process that can’t easily be stepped up. Australia has several world-class hard-rock lithium reserves and since 2014 investors have scrambled to bring mines on line. This is relevant because many of these deposits also contain tantalum. One example of this trend is Pilbara Minerals, a T.I.C. member and one of the more advanced lithium mines in Western Australia.

What impact might this tantalum by-product opportunity have on regional market shares of production going forward?

Increased diversification in production and a more “diversified” global supply picture is a potentially stabilizing factor for the industry over the long-term. This forecast is by Roskill Information Services, one of our members, and it shows a relative reduction in artisanal mining through a combination of new production in Brazil, Australia and elsewhere, and also, importantly, the semi-industrialisation of former artisanal mines in central Africa.

For the past decade, the tantalum industry has been a global leader in developing and operating mineral due diligence processes, resulting in stable, reliable production of conflict-free minerals from central Africa. Furthermore, with increasing tantalum production in both Brazil and Australia, the latter as a result of increased mining for lithium, diversity of production sources is also increasing. 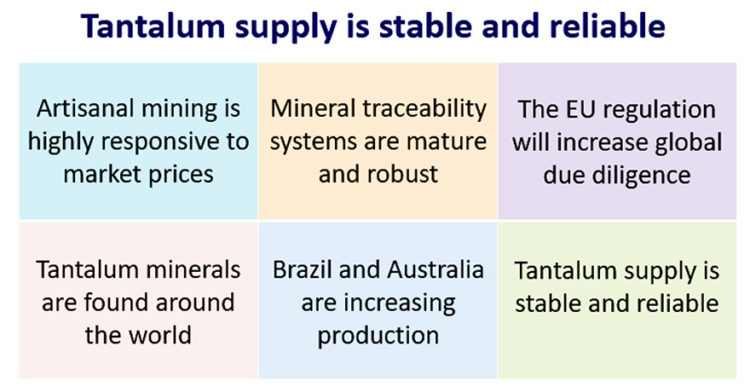 Tantalum ore is plentiful and will be in stable and reliable supply, now and going forward. You can plan on using tantalum-based capacitors with confidence.