Published in Nature magazine, Yokouchi et al. researchers report a quantum-mechanical inductor, called an emergent inductor, that uses the electric field produced by the current-driven dynamics observed for intricate structures of magnetic moments (spins) in a magnet. Inductors are hard to miniaturize because their effectiveness is proportional to their size. An approach based on quantum mechanics could overcome this issue, offering many potential applications.

One of the fundamental components of electrical circuits is the inductor, which provides inductance (opposition to changes in electric current). Conventional inductors consist of a coil of wire wrapped around a central core. Unfortunately, because the inductance of such devices is proportional to their cross-sectional area, it is difficult to miniaturize them while keeping a reasonably high inductance. Yokouchi1 et al. report a quantum-mechanical inductor called an emergent inductor, that uses the electric field produced by the current-driven dynamics observed for intricate structures of magnetic moments (spins) in a magnet. Notably, this device has an inductance that is inversely proportional to its area and does not require a coil or a core — characteristics that are highly desirable for practical applications.

For instance, an emergent magnetic field arises when electrons flow through what are known as topological non-collinear spin structures, those with a particular topology that makes them robust against small distortions or perturbations. The generated magnetic field leads to an extra signal in voltage measurements — known as Hall measurements — that is induced by a physical phenomenon called the topological Hall effect4,5. Given the complex nature of such spin structures, this voltage signal offers a convenient way to explore topological magnetic states in a wide range of materials6,7.

By contrast, an emergent electric field arises from the dynamics of non-collinear spin structures. For example, such a field is generated when a magnetic field drives the motion of domain walls8 — the boundaries between domains that have different magnetization orientations in magnetic materials. In 2019, it was shown theoretically that an emergent electric field could also be produced by the current-driven dynamics of non-collinear spin structures9. More spectacularly, it was predicted that this field would generate an inductance that is proportional to the rate of change of the current density. Because this density would be inversely proportional to the cross-sectional area of the device, the emergent inductance would increase with the decreasing area, in sharp contrast to the situation in ordinary inductors (Fig. 1). 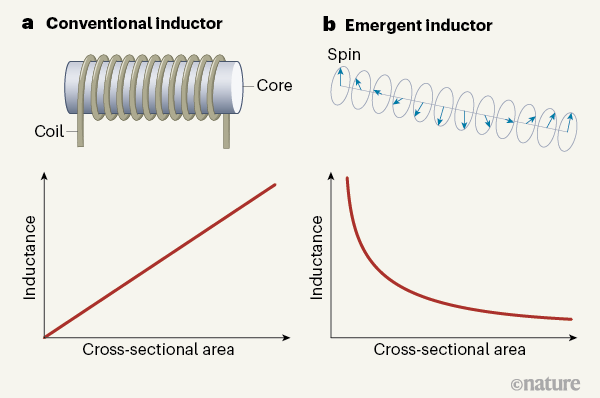 Figure 1 | Conventional and emergent inductors. Electronic devices known as inductors resist changes in the electric current — a property called inductance. a, A conventional inductor comprises a coil of wire wrapped around a central core and has an inductance that is proportional to its cross-sectional area. b, Yokouchi et al.1 have produced an inductor, termed an emergent inductor, that uses intricate structures of magnetic moments (spins) in a magnet. A particular arrangement of spins, known as a helical spin structure, is shown here. The authors’ device has an inductance that is inversely proportional to its cross-sectional area, paving the way for miniaturized inductors that do not require a coil or a core.

Yokouchi and colleagues exploited this idea using a micrometre-scale magnet made of Gd3Ru4Al12 (Gd, gadolinium; Ru, ruthenium; Al, aluminium) that contains various non-collinear spin structures, such as helical, conical and fan-shaped structures. They selected this material because it has a weak magnetic anisotropy (directional dependence of magnetic properties) and because its spin structures have a short pitch (spatial periodicity). Spins can move relatively freely under a weak magnetic anisotropy, and the emergent inductance is inversely proportional to the pitch length9.

The authors investigated the emergent inductance of their inductor using a technique called lock-in detection. They controlled the device’s spin-structure state by altering the temperature and strength of an applied magnetic field and carried out measurements on different states. They also varied the length, width, and thickness of the device, confirm reproducibility, and exclude the possibility that the observed signal was caused by external factors, such as contact electrodes.

For example, Yokouchi and colleagues discovered that the helical spin structures’ current-driven dynamics are responsible for the large emergent inductance. By contrast, the fan-shaped structures yield a much lower inductance because their local angular variations are much smaller than are those of the other structures. Moreover, the authors found that the sign of the emergent inductance can be switched between positive and negative by controlling the direction of spin-structure motion and striking contrast to ordinary inductors.

Yokouchi and colleagues’ work is important for several reasons. First, it offers a scalable approach for developing miniaturized high-inductance inductors, which could be used in many micro- or nanoscale electronic devices and integrated circuits. Such inductors would also be much simpler in design than are conventional inductors because a coil and a core would not be needed. Second, the work opens up exciting opportunities for constructing highly efficient hybrid spin–electronic circuits and systems. And third, it serves as proof that a fundamental concept in quantum mechanics — a Berry phase — can lead to real-world applications.

However, practical uses of such emergent inductors will need further breakthroughs. One major challenge is to develop inductors that act at room temperature, rather than at the current temperatures of about 10 kelvin. Overcoming this limitation will require extensive exploration of potential materials, especially to find a magnet in which short-pitch non-collinear spin structures can be readily stabilized and manipulated at room temperature. Developing a scheme for adding these inductors to integrated circuits will also be essential for applications. Nevertheless, Yokouchi et al. have made a key discovery that could lead to future engineering efforts in electronic devices, circuits and systems, while establishing an inspiring bridge between the world of quantum mechanics and modern electronics.