As DC currents increase along with switching frequencies in applications such as electric vehicles and hybrid electric vehicles, the performance demands on the DC power bus go beyond just the IR drop (i.e. voltage drop) and thermal considerations. That bus must now have very low inductance at higher frequencies into the hundreds of kilohertz, driven by design demands and the increased use of wide bandgap devices (WBG) represented by silicon carbide (SiC) and gallium nitride (GaN) switches.

The bus must have low resistance and low inductance but also sufficient capacitance to smooth out voltage ripple. Unfortunately, the same capacitors used for that second attribute are detrimental to the first one due to their interconnect and internal parasitics. Different approaches can be used to try to the multiple conflicting goals, in addition to simply adding more bulk capacitance.

Fig. 1. The power bus looks like a PC board but with a polymer dielectric rather than glass-epoxy, so it functions as a planar capacitor. (Source: Sandia National Laboratories)

This base capacitance is boosted by a large number (in the hundreds) of small multilayered ceramic capacitors (MLCCs) — rather than the customary electrolytic or film capacitors — connected between the planes using standard PC board vias, Figure 2.

Fig. 2. The top and bottom views of the assembled board show a large number of MLCC devices as well as the large, uninterrupted “ground” plane. (Source: Sandia National Laboratories)

This approach provides both electrical and thermal benefits. The spread-out placement of so many capacitors reduces shunt impedance to high-frequency current components, and the flat ceramic capacitors can tolerate higher temperatures and support better airflow. There are other benefits as well. In existing applications, the positive and negative (often called ground) rails use bus bars, and these are separated by a large area; as the magnetic field lines cross this larger area, there is a higher effective inductance due to the large current loop. The Sandia Laboratories plate-based approach greatly reduces the inductance by decreasing the area of the current loop.

In addition to extensive modelling, they tested this design from 100 Hz to 10 MHz with an impedance-measurement instrument, Figure 3, and those results closely matched their model.

They also compared their results to an available model of a bus used in a similar way in a Toyota Prius. Their bus had somewhat superior performance, was physically smaller, and could withstand higher temperatures. 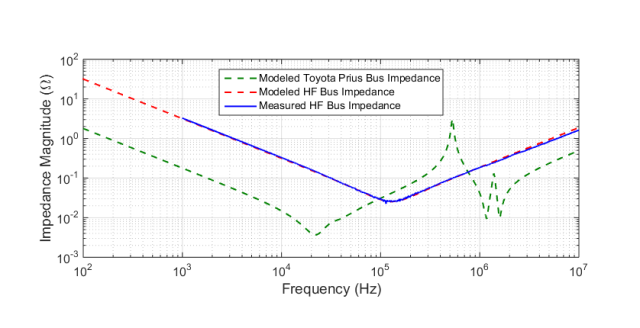 Fig. 3. The test result of impedance versus frequency showed the performance of the simulated and physical units tracked closely and was better than the existing bus in a Toyota Prius. (Source: Sandia National Laboratories)

EMC Filters – From component to design