Impact of a Decoupling Capacitor in a CMOS Inverter Circuit

Let’s start our discussion with a CMOS inverter logic gate in a totem-pole configuration, shown in Figure 1 [1]. 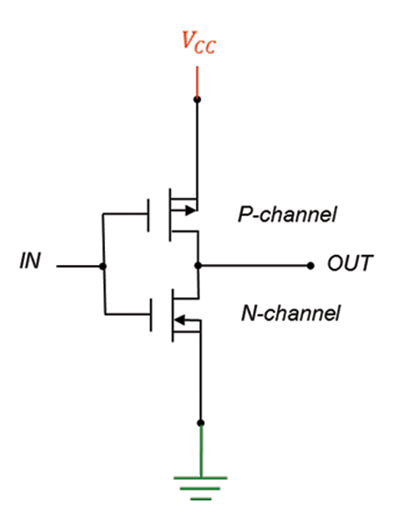 Let’s investigate the operation of this configuration on the low-to-high and high-to-low transition of the input to the first inverter.

First, assume that the load capacitors CGP and CGN are initially uncharged. When the input signal IN = Low, the upper transistor is ON and the lower is OFF. The current flows through the upper transistor, signal trace, and the capacitor CGN to ground. This is shown in Figure 3a.

Eventually, the capacitor CGN is charged to (approximately) VCC and the current flow stops, as shown in Figure 3b.

Figure 3: a) Input Signal is Low, b) Current flow stops when CGN is charged to VCC

At this point we have two sources of current:

The current then flows along the trace towards the driver and through the lower transistor to ground. Eventually, the current flow stops and the voltage across capacitor CGP is VCC. This is shown in Figure 4b.

Figure 4: a) Transition from low-to-high, b) Current flow stops when CGP is charged to VCC 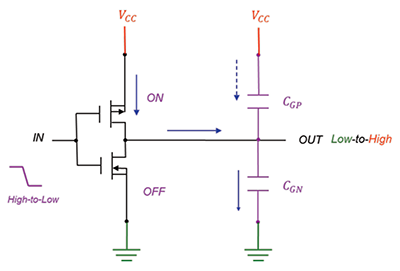 At this point we have two sources of current:

Now let’s turn our attention to a typical scenario in digital logic circuits with a dc voltage source CMOS driver and a load IC, as shown in Figure 6. 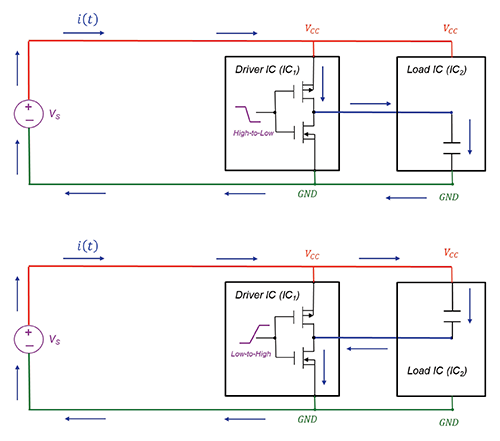 This time-varying current creates a time-varying magnetic flux that crosses the loop area of the circuit inducing a voltage drop along the traces. We can model this phenomenon by inserting either a voltage source somewhere in the loop, or by inserting an inductance somewhere in the loop. Both the induced voltage and the inductance are distributed along the loop. When the loop is electrically small at the frequencies considered we can model these distributed effects as lumped sources or inductances.

In any practical circuit the forward and return paths (horizontal lines in Figure 9, are orders of magnitude longer than the length of a path between the power and ground pins (vertical lines in Figure 9. It is, therefore, reasonable to insert the lumped parameters only into the forward and return paths. To model the flux-induced effect we will insert inductances along the power and ground traces. This is shown in Figure 7. 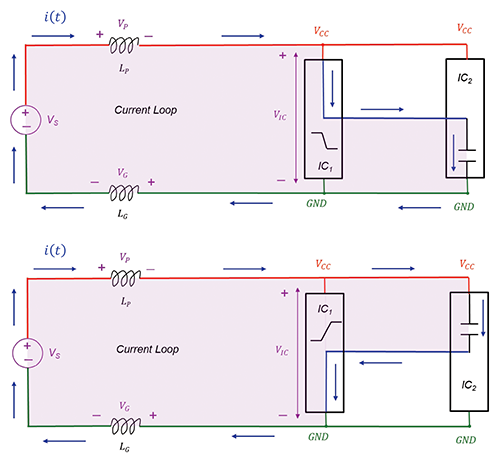 When the driver IC switches, the current is drawn from the source resulting in the voltages VP and VG across the power and ground inductances. We often refer to these voltages as a power rail collapse and a ground bounce, respectively.

Now, let’s place a capacitor between the power and ground pins near the switching IC, as shown in Figure 8. 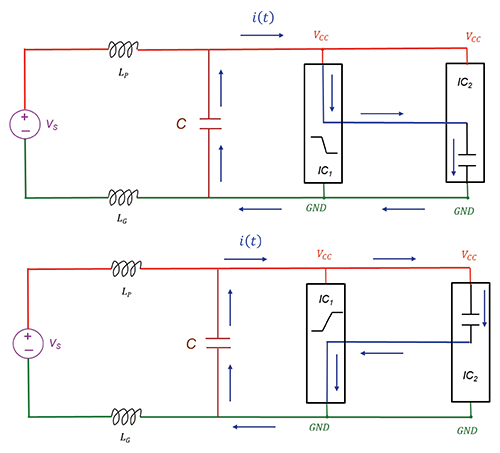 In reality, it supplies most of the current to the load, thus reducing the current draw from the source and consequently reducing the voltage drops across the inductances. Assuming the ideal scenario, the transient current flows now in a smaller loop, as shown in Figure 9. This, in turn, reduces radiated emissions. 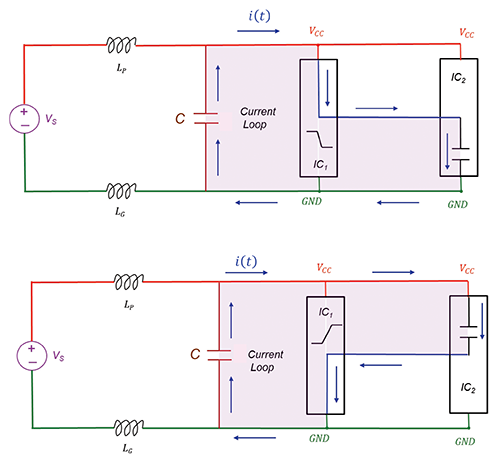 The measurement setup is shown in Figure 10. 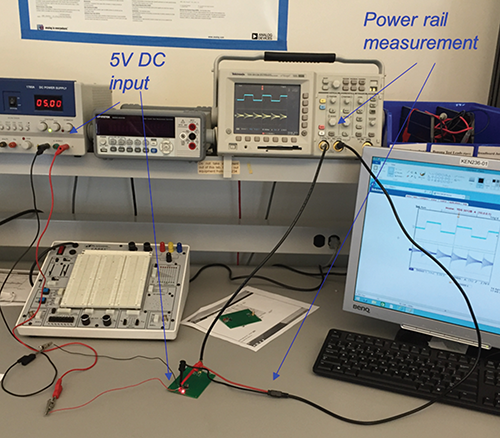 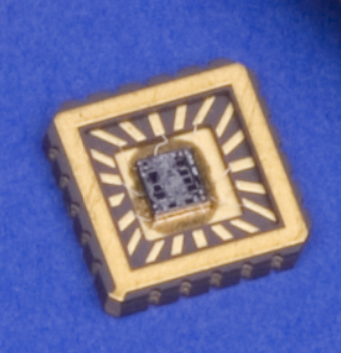 Get a quick price/delivery estimation of your components, being the first in front of your customer 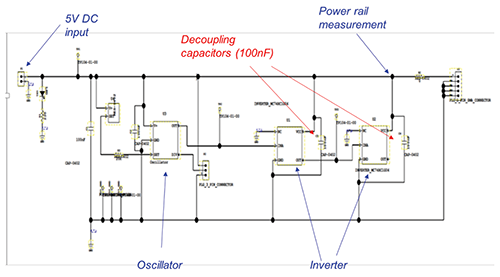 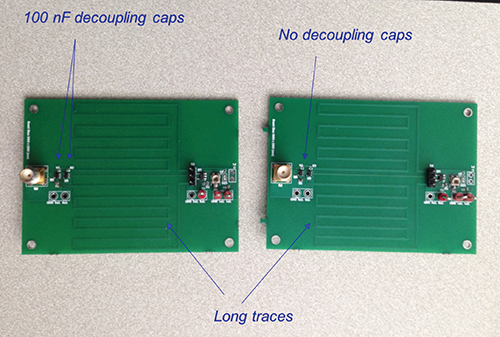 Figure 13: Voltage at the VCC pin at the inverter – no decoupling caps

Notice the peak-to-peak voltage fluctuations of 1.58 V. Figure 14 shows the voltage measurement at the VCC pin of the inverter with the decoupling capacitors. 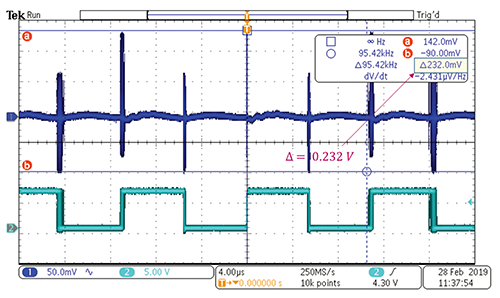 Figure 14: Voltage at the VCC pin at the inverter with decoupling caps

Note the dramatic decrease in the voltage fluctuations from 1.52 V to 232 mV. Finally, Figure 15 shows the radiation measurements with and without the decoupling capacitors. 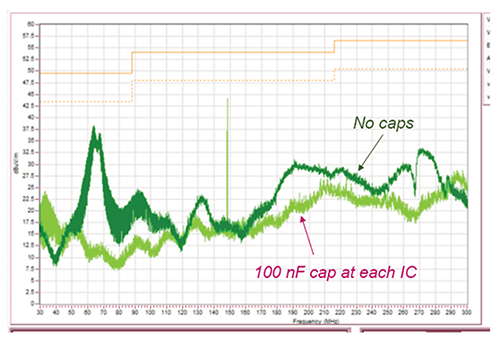 Dr. Bogdan Adamczyk is professor and director of the EMC Center at Grand Valley State University (http://www.gvsu.edu/emccenter) where he develops EMC educational material and teaches EMC certificate courses for industry. He is an iNARTE certified EMC Master Design Engineer. Prof. Adamczyk is the author of the textbook “Foundations of Electromagnetic Compatibility with Practical Applications” (Wiley, 2017). He can be reached at adamczyb@gvsu.edu.