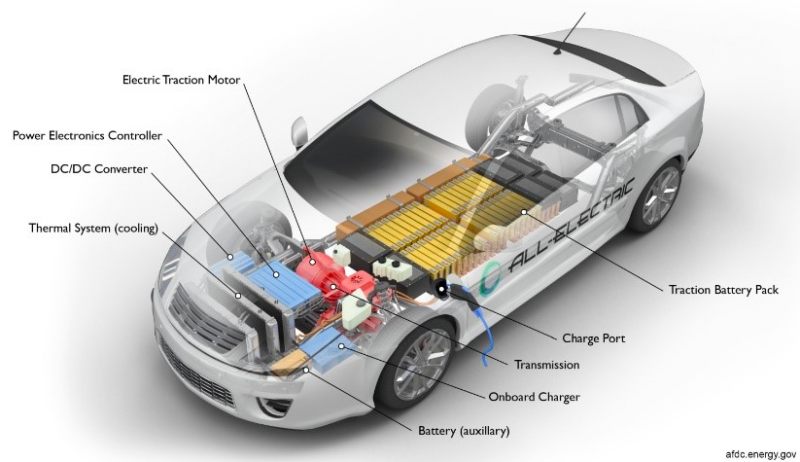 Figure 1: DC-Link capacitors are a cornerstone in power conversion design for many inverter applications, including hybrid electric and electric vehicles. Together, HEVs and EVs will have grown to an estimated 30% of total vehicle sales by 2025, according to JP Morgan Chase and Company. (Image source: afdc.energy.gov)

The automotive industry includes a prime example of power conversion in the hybrid and electric powertrain. Battery electric vehicles include a rechargeable bank of batteries to store energy for the drive system, an electric drive motor, and a power controller that includes an inverter. These all operate at high voltages extending from 48 VDC to as high as 800 VDC. Due to the physical limitations that limit current, high voltage correlates to high performance. The higher the operating DC voltage, the lower the required current flow for the same power output (P=VI). The automotive industry is well-known for requiring components that can operate with exceeding reliability at extremely high temperatures, under continuous vibration, and where components are subject to harsh environmental conditions. The three-stage traction inverter converts battery power to drive the motor, and the DC-Link capacitor is key to this design. 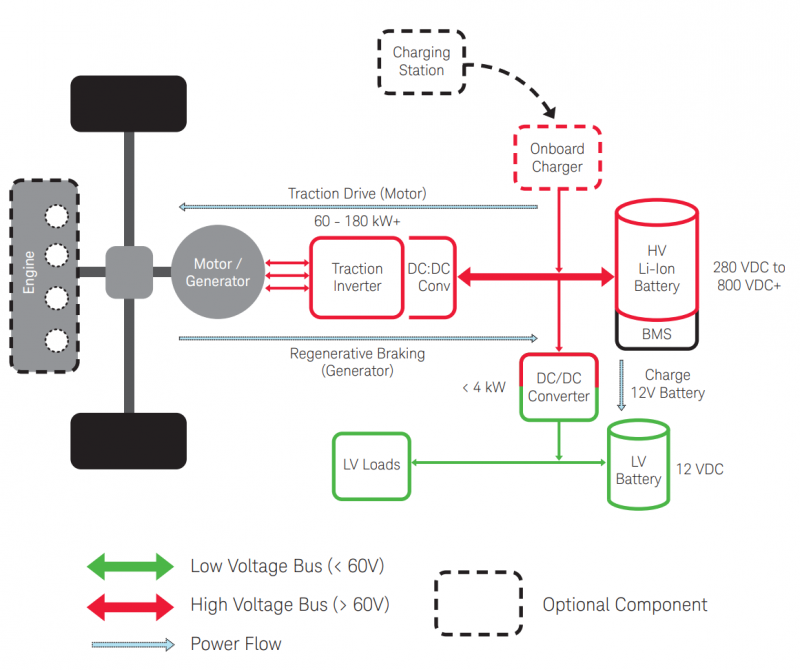 Unlike a toy car, electric vehicles do not operate directly from energy stored in the battery pack; a conversion is needed,  Consider a system block diagram including a 3-stage power inverter for a hybrid/electric vehicle (HEV/EV) in Figure 3, where:

Why the DC-Link Capacitor is Vital

The DC-link capacitor must balance fluctuating instantaneous power on the rails injected by activity from the first and third stages (see Figure 3). The DC-Link capacitor stabilizes the “ripple” generated by Stage III’s high-frequency power switching circuits. Ripple current/voltage (specified at a given frequency and temperature) is the total amount of Root Mean Square (RMS) alternating and direct current/voltage that a capacitor can withstand without failing. The DC-Link capacitor (located in Stage II) must stabilize and smooth out the voltage and current on the rails (i.e., decoupling spikes caused by switching). You can calculate the ripple voltage using this equation:

The DC-link capacitor’s purpose is to provide a more stable DC voltage, limiting fluctuations as the inverter sporadically demands heavy current. A design can use different technologies for DC-Link capacitors such as aluminum electrolytic, film, and ceramic types. The choice is not easy and depends strongly on the application.

Finding the best DC-Link capacitor starts by comparing nominal capacitance values and voltage ratings that translate to known energy requirements, while also shooting for high ripple current ratings. Ripples at DC-Link nodes, primarily generated by furiously fast-switching IGBTs or MOSFETs in Stage III (see Figure 3), affects performance because every real capacitor has some amount of impedance (and self-inductance). The DC-Link capacitor must regulate voltage and absorb ripples in the current, as well.

Finding the best DC-Link capacitor starts by comparing nominal capacitance values and voltage ratings that translate to known energy requirements, while also shooting for high ripple current ratings. Ripples at DC-Link nodes, primarily generated by furiously fast-switching IGBTs or MOSFETs in Stage III (see Figure 3), affects performance because every real capacitor has some amount of impedance (and self-inductance). The DC-Link capacitor must regulate voltage and absorb ripples in the current, as well.

A ripple wiggles the level of the voltage that appears across the DC-Link capacitor while the switching current’s ripple travels through the capacitor (V=IR). One must also consider inverter switching frequencies that the DC-Link capacitor must tolerate. For instance, film capacitors cannot perform adequately if the switching frequency is greater than 1MHz. Other considerations in choosing a DC-Link capacitor include knowing the DC voltage required at the rails, the expected life of the application, the maximum possible ripple current and frequency that the system will experience, and whether the generated ripple current is steady-state or intermittent.

Datasheets for the better DC-Link capacitors should indicate low self-inductance, very low Equivalent Series Resistance (ESR), and high ripple current tolerance, all at comparable operating temperatures and frequencies amongst the components you are comparing. (A capacitor’s ESR is the total internal resistance as specified at a given frequency and temperature.) The lowest possible ESR will minimize the cast-off heat in the form of dissipated power (PDissipated =I2 x ESR). However, general trade-offs mean that for DC-Link film capacitors, ESR is substantially lower while providing a good capacitance voltage (CV) rating, which typically produces a much better response to ripple current.[1]

Thus, DC-Link film capacitors allow for high ripple current and longer expected life than electrolytic capacitors, while also providing a higher capacitance value than ceramics type capacitors. Nevertheless, the actual requirement of the ripple current rating is difficult to predict and varies depending on the switching frequency and the harmonics that are generated by the input and output stages (i.e., Stage I and III). For example, from the oversimplified block diagram in Figure 3, one could assume a more square-shaped waveform based on the inverter stage. The DC-Link capacitor is the element that sinks or sources the respective currents. Other types of architectures may have a more triangular shape current waveform.

In general, nominal capacitance values can change due to changes in ambient operating temperature or changes in the applied voltage and frequency. Other variables for consideration: self-inductance can significantly reduce a capacitor’s effective impedance at high frequencies, thus changing the capacitor’s expected behavior. Regardless of the type of capacitor chosen, noise suppressors such as KEMET Flex Suppressors® can help suppress high-frequency noise generated by the surrounding environment.

While considering design options, ask whether DC-Link capacitor under consideration can hold up a reasonable level of charge voltage after the input voltage is removed in between switching cycles. To find the amount of energy that is stored in the DC-Link capacitor–to feed the load as the capacitor discharges (as well as the discharge voltage and the hold capacitor values)–calculate hold up capacitance:

Where Vin_max is the peak value of the rectified voltage (Vin_max= • Vline}, Vdisch is the discharge voltage (Vdisch =  /2 • Vin_max) at some load value and line frequency (ω), Vline is line voltage, Pload is load power, Pin is the inverter’s input average power, and VC_av is the voltage across the average value of Ch:

Finally, in any high-power design one must consider if cooling is provided and if so, what type? The ambient temperature profile is important to ensure thorough attention to choosing the best DC-Link capacitor.

Film capacitors also have a longer life span than electrolytics, mainly because they are constructed from vapor-deposited layers of metal over a substrate material. Due to high levels of energy stored in between the ultrathin layers of metal, an internal short circuit can be naturally self-corrected as small faults get vaporized in microseconds without a noticeable change in performance. Film capacitors are also suitable for high-voltage pulsing applications and corresponding safety concerns, as they can withstand rapid overvoltage and transients. Film capacitors are not polarized, can have a longer operational life (even more so by derating), nearly unlimited shelf life, increased current capacity, provide stable operation across a wider temperature range, and offer better mechanical stability than electrolytic capacitors. Additional benefits include a wide choice in how film capacitors are mounted. And, of particular importance to HEV/EV, robust film capacitors are available at voltage bus levels exceeding 500 VDC.

As demonstrated above, selecting the appropriate DC-Link Capacitor can be an involved, but critically important, process. KEMET has the products and people necessary to streamline this process for you. Visit ComponentEdge for more information and support.