Tantalum (Ta) capacitors and multilayer ceramic capacitors (MLCCs) are two widely accepted capacitor technologies that can be employed in a wide range of electronics applications. Although both technologies perform the same basic function, they are very different in terms of their construction techniques, materials, and performance under various conditions, so it’s important to understand the potential impact of selecting one over the other

Understanding the inherent characteristics of both tantalum capacitors and MLCCs, including their reliability and behavior with temperature and voltage, typical testing capabilities, and the latest developments for each will help ensure sound selections. 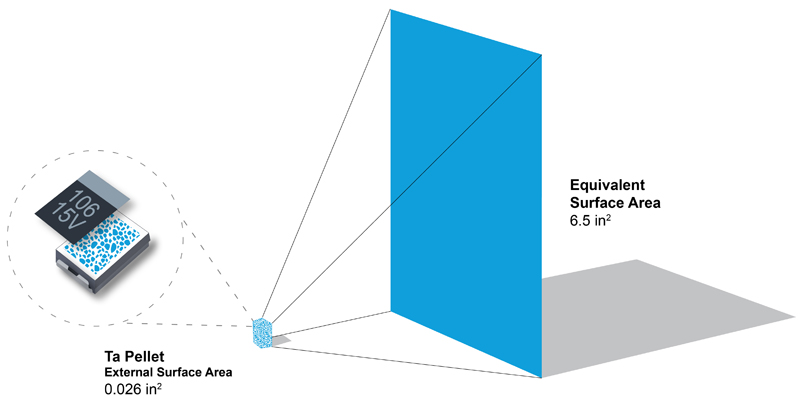 Figure 1: The dielectric surface area of a tantalum capacitor anode compared to its finished size

Tantalum capacitors achieve high capacitance values through a combination of factors, including a tantalum pentoxide (Ta2O5, εr = 27) dielectric, a large plate area (A), and a very thin dielectric thickness (d). The positively charged dielectric plate of a tantalum capacitor is formed from pure elemental grade tantalum powder that is pressed and sintered into a pellet. These pellets are extremely porous and, as such, allow the surface area of each individual particle to collectively comprise the area of an equivalent capacitor plate. In addition, the Ta2O5 dielectric layer is formed at a rate of 17 Ångströms per volt, with the thickness proportional to the applied voltage, which results in a very thin dielectric layer and contributes to large capacitance values.

For surface-mount applications, AVX manufactures two styles of tantalum capacitors, both of which incorporate a MnO2-based cathode to take advantage of its self-healing characteristics and are shown in Figure 2. The molded style (top) is the more traditional configuration and utilizes a tantalum wire embedded in the pellet to create a positive connection to the circuit. The newer, smaller, microchip-style configuration (bottom) was introduced to the market more recently and is used in applications with high component density and minimal available board space. The microchip-style configuration has a tantalum wafer with tantalum powder pressed and sintered onto its surface and defines individual anodes using a high precision sawing operation. Both types of capacitors have the same basic elements and both have been proven suitable for the highest reliability applications over decades of production and testing. 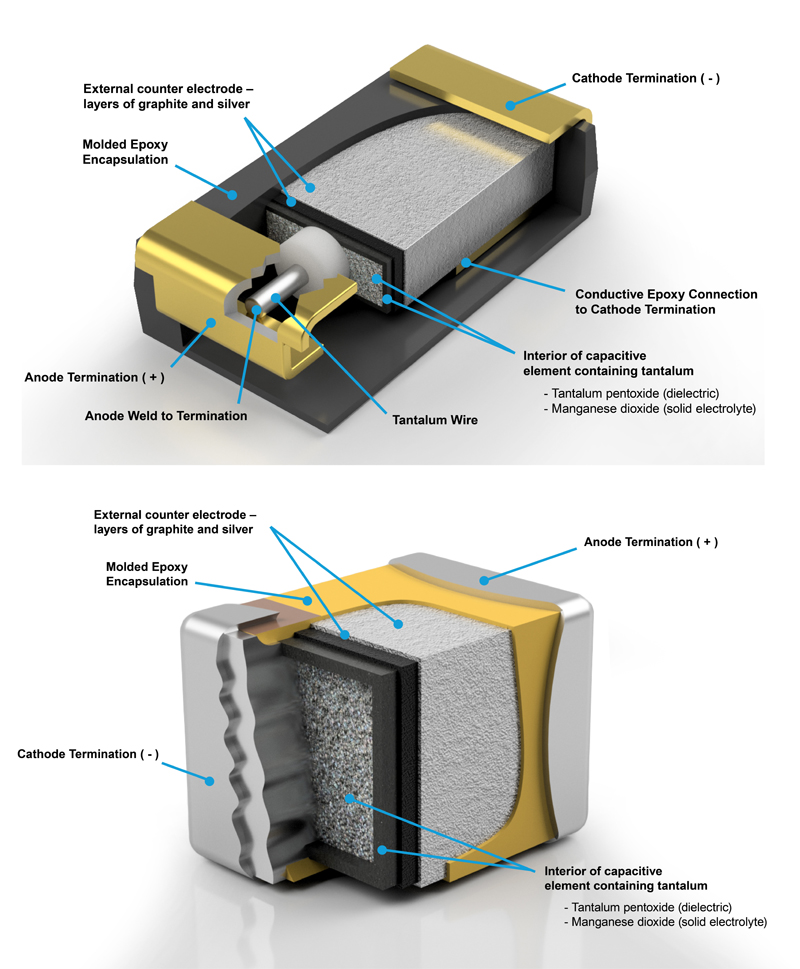 In contrast to tantalum capacitors, ceramic capacitors have less overall plate area and significantly thicker layers but compensate for such deficiencies by using dielectric materials with a much higher dielectric constant. Titanium dioxide (εr ~ 86–173) and barium titanate (εr ~ 1250–10000) are two of the most popular dielectric materials used to make MLCCs, and each material comprises its own class of capacitors. 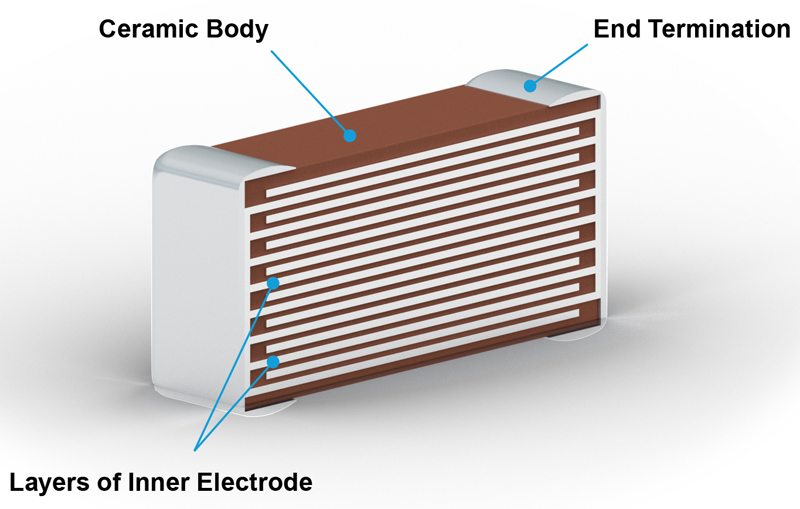 Class 2 ceramic capacitors utilize ferroelectric dielectric materials, such as barium titanate (BaTiO), and are modified by additives including aluminum silicate, magnesium silicate, and aluminum oxide. These materials have a higher permittivity than Class 1 capacitors (εr ~ 200–14,000 depending on field strength) and achieve better volumetric efficiency, but exhibit lower accuracy and stability. Class 2 capacitors also have nonlinear capacitance values that are dependent on both operating temperatures and applied a voltage and will age over time, which can affect performance. 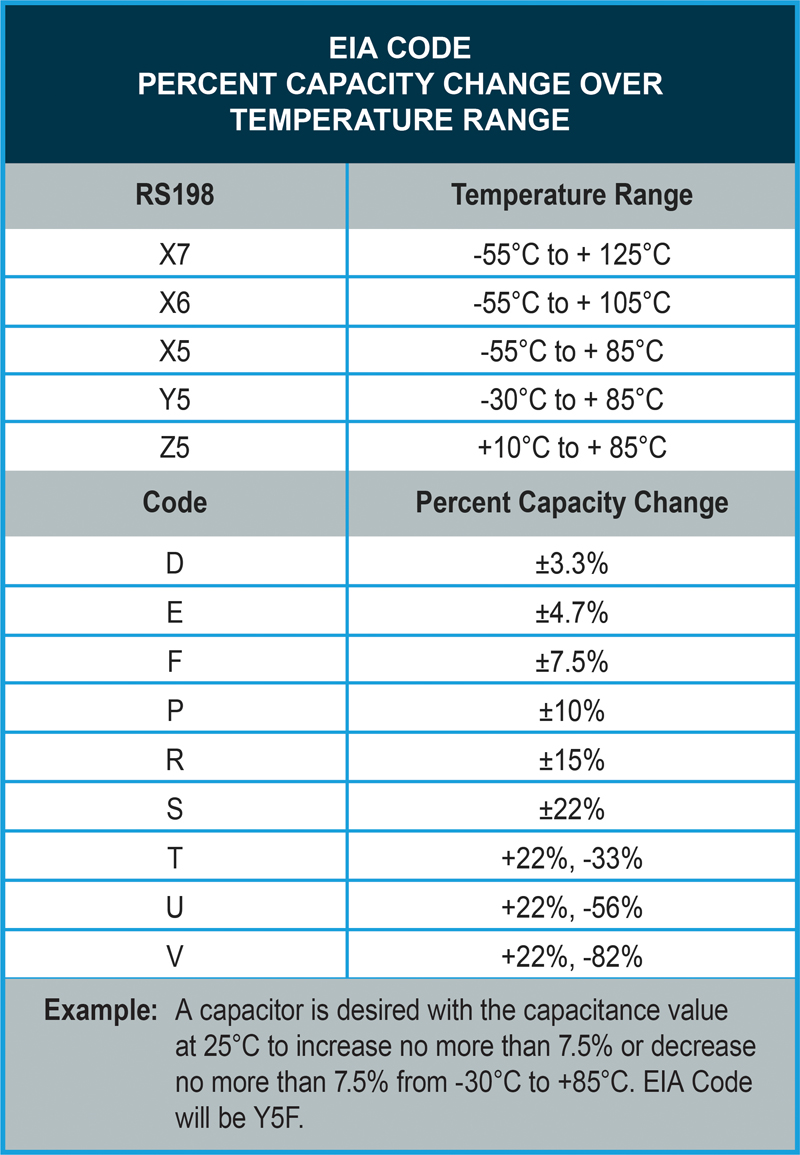 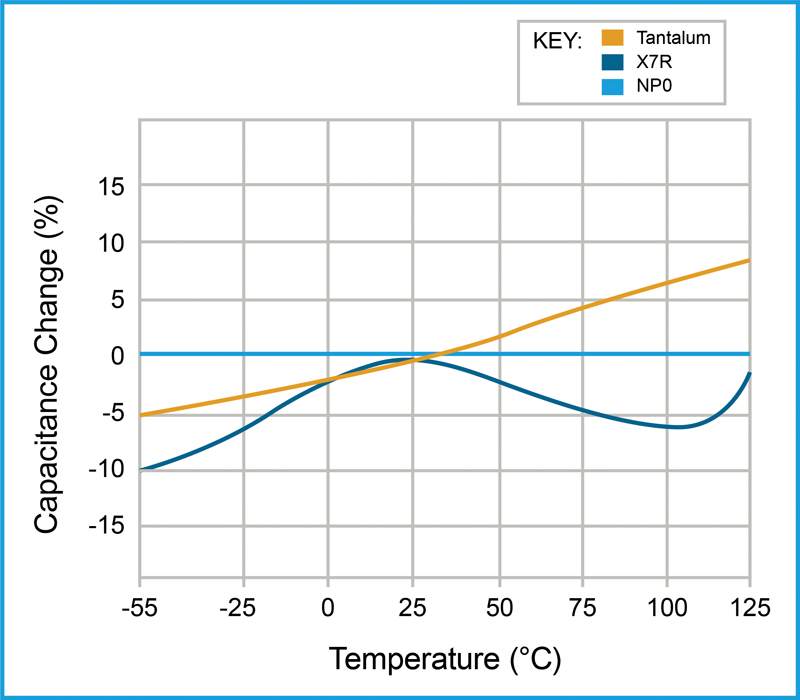 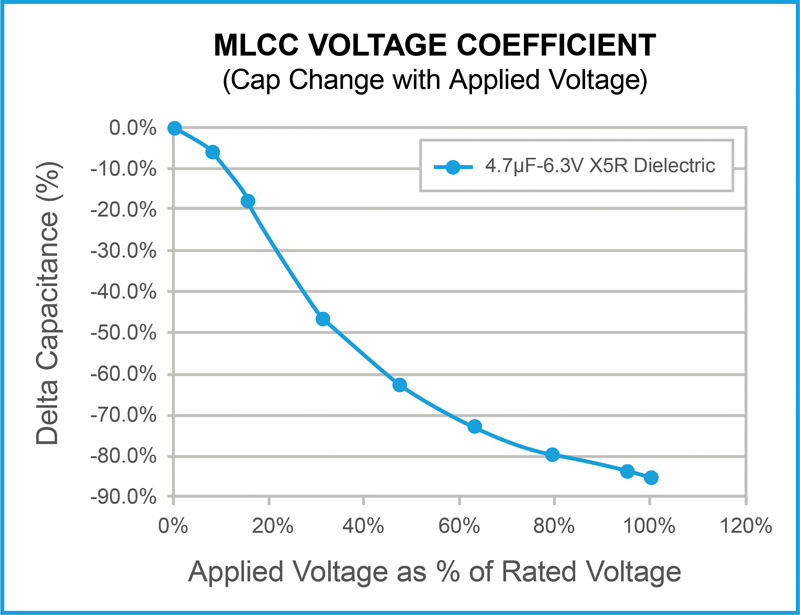 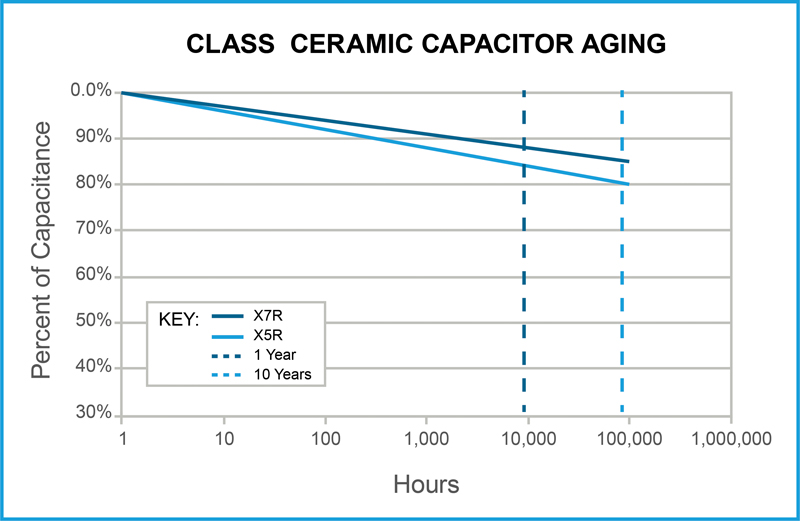 Insulation resistance is the resistance measured across the dielectric of a capacitor. As capacitance values (and hence the area of the dielectric) increases, the IR decreases. So, the product (C x IR or RC) is often specified in Ohm Farads or, more commonly, megaohms. Leakage current is determined by dividing the rated voltage by IR (per Ohm’s Law). Ceramic capacitors typically specify insulation resistance, whereas tantalum capacitors are graded by direct current leakage (or DCL). These units are equivalent and conversion from one measure to the other is made using Ohm’s law.

Figure 8: A comparison of the IR of ceramic capacitors to DCL of tantalum capacitors

Figure 9 depicts the life test conditions for various types of ceramic and tantalum capacitors made by several different manufacturers and the allowable change in insulation resistance and/or DCL/CV. As shown, the conditions for life testing are not standardized, so direct comparisons between ceramic capacitors made by various manufacturers are difficult to make with a high degree of certainty and direct comparisons from ceramic to tantalum capacitors is virtually impossible, save for the exception of a few very high capacitance ratings.

The AVX team selected samples of ceramic and tantalum capacitors that represent common ratings for both technologies and commonly used values for medical and other high-reliability applications.

The team submitted all parts to the same test plan to ensure that special testing requirements (e.g., capacitance test frequency and DC Bias, hold times after environmental testing, etc.) could be accurately observed, collected, and compared for both basic product types. 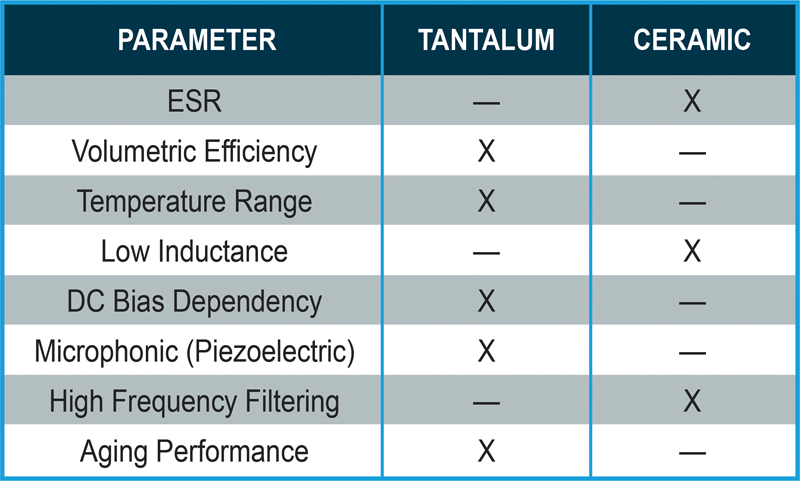 Figure 10: A comparison of tantalum and ceramic capacitor parameters

In conclusion, both tantalum and ceramic capacitors offer several advantages and benefits that aid in the manufacturing of efficient, high-reliability electronics across a wide range of markets. However, since both capacitors differ significantly with regard to their composition, materials, and performance, the choice between specifying one technology over the other comes down to specific application considerations and requirements. So, it is important for engineers to take the potential effects of component selection into account early on in their design phase.

Optoelectronic Components for Integration into Space