Smoltek has developed the world’s thinnest capacitor. The company is now demonstrating practically what it has previously claimed by producing a prototype of a CNF-MIM capacitor with a total height of just under 40 micrometres.

Smoltek can today show a capacitor prototype that is only a few micrometres high and together with the necessary substrate (component carrier) barely reaches 40 micrometres in total height. This at the same time as one can show a capacitance density of 500nF/mm2 (nanofarad per square millimetre), an equivalent series resistance below 10 mΩ (milliohm) and an internal inductance below 15 pH (picohenry).

We have always known that our capacitor technology enables extremely thin capacitor components, but seeing is believing. Being able to show this high-performance prototype helps a lot in our work in selling the technology”, says Ola Tiverman, President of Smoltek Semi. 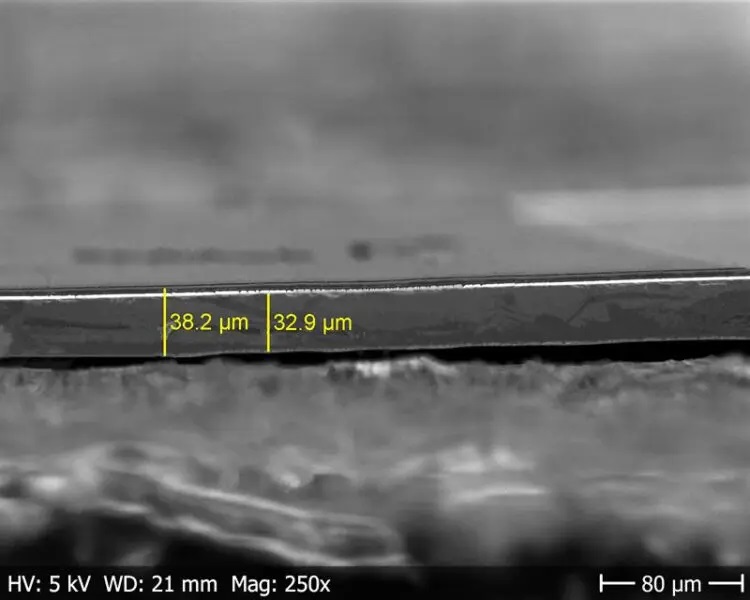 The need for thinner high-performance capacitors for advanced semiconductor integration will continue to grow with new generations of processors, not least for 5G applications.

Such a thin capacitor proof-of concept that at the same time shows excellent performance is a result of Smoltek’s own R&D efforts. This also demonstrates the scalability of our CNF-MIM technology and the applicability of the technology for use in cutting-edge applications. And not least, the unique advantage that CNF-MIM provides compared to competing technology by meeting the need for increasingly thinner capacitors with high performance even in the longer term”, says Vincent Desmaris, Chief Technology Officer at Smoltek.

Based in Gothenburg – Challenging the global semiconductor industry

Smoltek, in Gothenburg, Sweden, has since the start developed a number of application concepts, based on the company’s unique and patent-protected carbon nanotechnology platform, aimed towards the global semiconductor industry.

Since 2017, when the industry first began to show a clear interest in Smoltek’s capacitor technology, in particular, the company’s technology development has been directed with the aim of making these microscopically small capacitors even smaller, while maintaining performance within important parameters; such as high capacitance density, low leakage current, low equivalent series resistance and low inductance.

With this demonstration of the opportunities with Smoltek’s CNF-MIM technology, the company challenges the major players in the semiconductor industry about who has the technology to manufacture the thinnest capacitors in a comparable performance segment.

One of the World’s Smallest LVDS / LVPECL Oscillators