The performance of a capacitor greatly depends on the environment in which it is used. Exposing a standard capacitor to extreme conditions can cause it to fail, overheat, or even burn. For semi-critical and critical applications, it is necessary to use high-reliability components. Fail-safe capacitors are designed to withstand harsh conditions, and they are mostly used in applications that demand highly reliable components. Fused tantalum capacitors and open mode multilayer ceramic capacitors (MLCCs) are fail-safe components that are suitable for use in harsh environments.

Adding a fuse to a tantalum capacitor helps to enhance its effective reliability. This technology involves adding a fuse element in series with the tantalum capacitor. The capacitor/fuse module switches to high resistance mode, usually above 10MΩ, when the current limit of the fuse is exceeded. The open-circuit condition helps to minimize damage to the circuit. Although the high resistance mode can cause detectable performance degradation, it cannot cause a total circuit loss. A fuse element has inherent resistance, and adding it to a tantalum capacitor increases the equivalent series resistance (ESR). This means that the capacitor/fuse assembly has a higher ESR as compared to a standalone capacitor.

Methods of making a capacitor/fuse module

In a capacitor/fuse module, the fuse is placed in such a way that it is in series with the capacitor. Using a fusible link is one of the common methods of making a capacitor/fuse assembly. When excessive current flows through the assembly, it initiates an exothermic reaction that opens the current path. This type of fuse is referred to as an electrically activated fuse, and the fusible link is made of two or more metallic elements. Another method of making a fused tantalum capacitor entails using a low melting point wire. The wire melts when excessive current flows through the module. Unlike electrically activated fuses, no exothermic reaction is required to open the thermally activated fuse. Thermal sensitivity, electrical resistances, and speed of operation are some of the key factors that should be considered when manufacturing wire fuses.

Manufacturing a wire fuse involves many manufacturing steps, and the method is not well compatible with most pick-and-place automated assembly equipment. Using ready-made thin-film fuses is, therefore, a better method of producing capacitor/fuse modules. This approach allows better control of the physical and electrical characteristics of the capacitor/fuse assembly, and it is mostly used in the manufacturing of today’s surface mount circuit boards. It yields ultra-miniature assemblies with predictable and precise fusing characteristics. In addition, thin-film construction yields chip-style packages that are easy to mount using modern automated assembly equipment.

The most important ratings to consider when selecting a fuse for a capacitor/fuse module are current interrupt rating and operating voltage rating. The two ratings determine the inrush currents and surge that a fuse can withstand, and exceeding them can cause it to melt or rupture. The current squared seconds (I2t) – a standardized unit that factors the magnitude, duration, and shape of current pulses- is commonly used for categorizing fuses. The I2t of a fuse determines when a fuse will open, and it is one of the key parameters to consider when selecting a fuse for a tantalum capacitor. Apart from voltage rating, current interrupt rating, and I2t values, it is also important to consider pulse de-rating, thermal de-rating, and time-current characteristics when selecting a fuse.

Board flexure can cause both active and passive electronic components to fail. Since multilayer ceramic capacitors (MLCCs) are highly susceptible to mechanical cracking due to their brittle nature, it is necessary for circuit board manufacturers to ensure that their board handling techniques do not expose boards to excessive bending. Some of the processes that can expose boards to excessive bending include mounting in assembling and depanelization. Use of unsupported input/output edge connectors and pick-and-place equipment can also cause excessive bending.

The main causes of mechanical damage to MLCCs can be broadly classified into impact cracking and flex cracking. Impact cracking occurs during the process of placing a component onto a PCB while flex cracking occurs mainly due to excessive board flexure. Although it is possible to minimize board flexure, it is difficult to fully eliminate it. Open mode capacitors are designed to withstand forces that cause mechanical cracks, and they are suitable for applications that demand high-reliability multilayer ceramic capacitors

Board flexure cracks are a major cause of short circuits and component failure in multilayer ceramic capacitors. Open mode multilayer ceramic capacitors have a high tolerance to board flexure cracks, and this makes them a suitable choice for applications that demand protected components. The electrodes of these reduced risk MLCCs are uniquely designed to compensate for the typical crack path caused by excessive PCB bending during manufacturing or assembly.

Excessive bending of a printed circuit board transfers stress to the soldered components. A ceramic capacitor cracks if its breaking strength is less than the applied stress. In some cases, the stress can cause displacement of the component. Such a displacement can cause counter electrodes to come into contact thereby resulting in a short circuit. The open mode design reduces the possibility of a short circuit by reducing the active area in a multilayer ceramic capacitor. Shortening of the electrode layers increases the distance between the counter electrodes and the potential crack. On the flip side, this design compromises the capacitance of a multilayer ceramic capacitor. 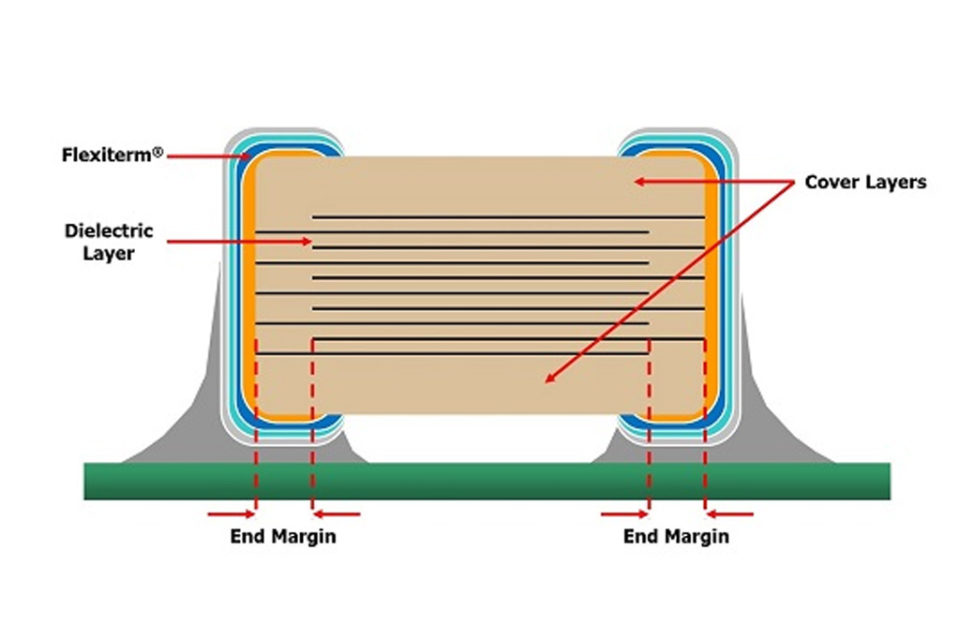 Open mode design – a crack will only reduce capacitance