Figure 1.1 (below) illustrates the various raw materials consumed in the production of capacitors worldwide. Feedstocks for capacitors include metals, ceramics, plastics and carbon, beginning in the form of ores or resins and transformed into powders, pastes and sheets before being consumed as finished capacitors for bypass, decoupling, filtering and burst power circuits in modern electronics. With trillions of pieces produced each year, materials consumption is moderate in terms of volume, but extremely consistent and profitable for miners and chemical processing companies.

In an attempt to achieve desired surface area and capacitance, manufacturers use one of three methods – stacking, winding or pressing – to maximize passive component functionality for portability in modern electronics. The active surface area of the materials described is created by advanced-engineered raw materials processing, primarily milling, etching and metallizing.

Any fluctuation in price or availability for these key feedstocks can have a negative impact on profit margins for electronic component producers, but seldom do component manufacturers or their OEM and EMS customers have long-term visibility of the various sub-levels of the supply chain. 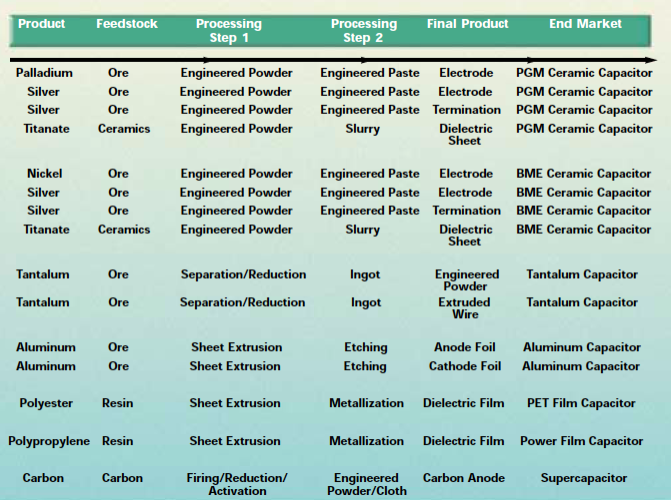 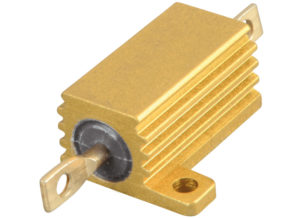 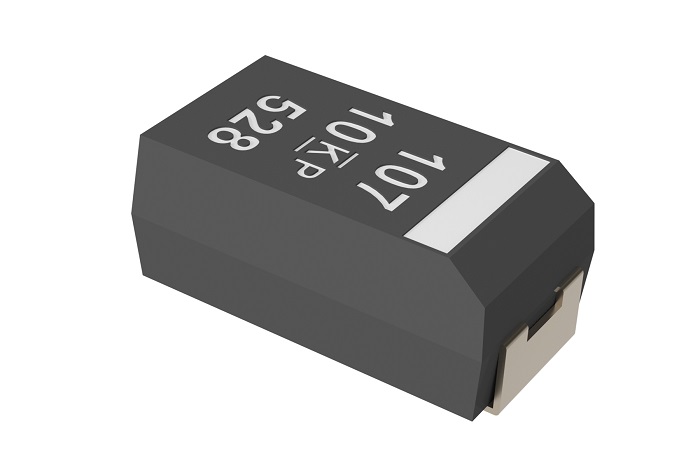 Ceramic capacitors employ metals in electrodes and terminations. Because of the specialty nature of the metals consumed, these represent a significant segment of materials demand in passive components in 2019.

The dielectric materials consumed in ceramic capacitors are based primarily on barium carbonate and titanium dioxide compounds, which are mixed to form barium-titanate and a variety of other ceramic-based dielectric matching systems. When mixed with additives, the ceramic dielectric material is converted into a composition or formulation that communicates the performance characteristics of the finished capacitor to the electrical engineer – for example, X5R, X6S, X7R, Y5V and COG are all chemical formulations.

The variable in chemical matching systems may ultimately be determined based upon the finished capacitor’s requirement for capacitance stability vs. temperature. The trend over the last decade has been to modify the ceramic composition to allow for capacitance in a smaller chip case size. This sacrifices performance with temperature, voltage handling capability, ESR, IR and DF; the design engineer must justify this for the higher capacitance value.

This is, of course, the result of the extraordinary price of palladium in 2019, which is almost twice what it was 24 months ago at USD $1,500 per troy ounce, and represents up to 50 percent of the cost of the PGM ceramic capacitor in high-fire systems.

This cost is quite prohibitive and totally noncompetitive against ceramic capacitors produced with base metal electrodes such as nickel, which dominated the lucrative high-capacitance portion of the MLCC business in 2017 and where the bottleneck in production has caused worldwide extensions of lead times. Such pricing urges greater BME MLCC development.

The outlook for PGM ceramic materials (which are ultimately consumed in mission-critical applications, such as automotive under-the-hood, aerospace, medical, oil and gas, satellites and infrastructure) is that costs will increase in accordance with the volatility of palladium electrode materials and silver erminations. These markets that are controlled by the outcome of other markets – most notably the catalytic converter markets in automobiles.

Most recently, and in accordance with this MarketEYE story, metals processors in PGM were curious why PGM consumption in passive components had increased in FY 2019 and why this was not forecast by the industry. In fact, the opposite was forecast, and it is this change in forecasting that is creating volatility in metals in June 2019.

Palladium Price Trend, 2012-2019: Palladium is a platinum group metal mined in Russia and South Africa, among other locations; it is consumed primarily for auto-catalysts, but also for jewelry. It is the primary electrode material in precious-metal based MLCCs which are, in turn, used in high-reliability, high-temperature and high-voltage product markets globally.

Palladium has exhibited extreme price volatility between 2012 and 2019, with its price in June 2019 at a five-year high. High feedstock pricing impacts production costs for MLCC manufacturers, which is the primary motivating factor behind the movement to nickel electrodes in many end-markets where it has not been used before (such as defense, space, and oil and gas electronics). 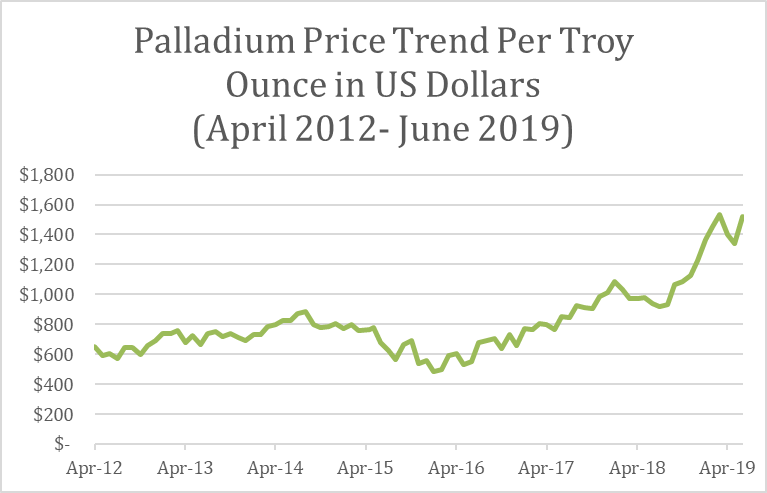 Merchant market sales of raw materials to the BME ceramic capacitor industry have grown dramatically over the last 20 years. Sales will continue to grow at a healthy rate over the next five years as more emphasis is placed on improving yields and profitability for the MLCC market from 470 to 1000 microfarad.

Nickel Price Trend: Nickel is the primary electrode material consumed in high-capacitance MLCCs. Fluctuations in nickel price are primarily the result of competition for the metal with the steel industry, where it is used as a hardener. In turn, nickel supply is important for the production of X5R, X6S, Y5V and X7R MLCCs which are the capacitors of choice for smartphones, tablets and TV sets.

Overall, nickel prices have trended down between April 2012 and June 2019 as the material is primarily consumed as a hardener in steel and in the battery industry (see Figure 1.3). The historical price stability of nickel is a great selling point for its use instead of palladium in MLCC electrodes. Remember that it is the rapid shift of materials pricing within existing contracts that has caused the most damage in the capacitor supply chain over time. 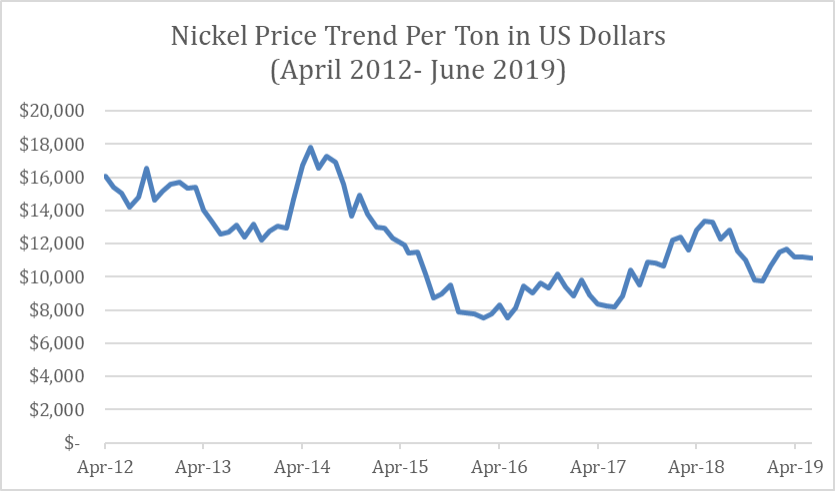 Copper Price Trend: Copper engineered powders are consumed in the production of MLCCs as well, but as the termination material consumed in conjunction with nickel-type electrodes – a base metal must be paired with another base metal in MLCC design. Therefore, copper and nickel are an important base metal duo.

Copper is used in some MLCC electrode systems because, unlike its counterpart nickel, it is non-magnetic. Overall, copper prices between April 2012 and June 2019 have been trending down, with prices plunging in 2019 to challenge recent five-year lows (see Figure 1.4). Copper’s price stability is also a selling point for use of BME MLCCs instead of PGM-type MLCCs where applicable. 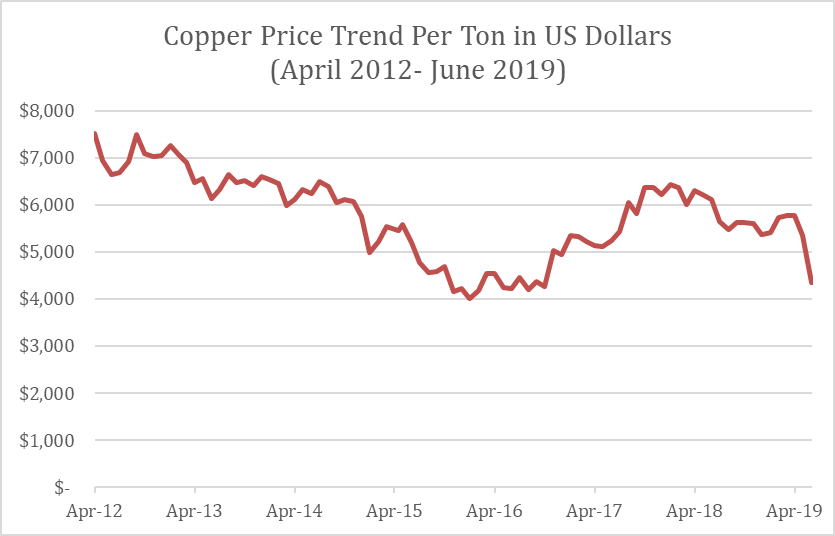 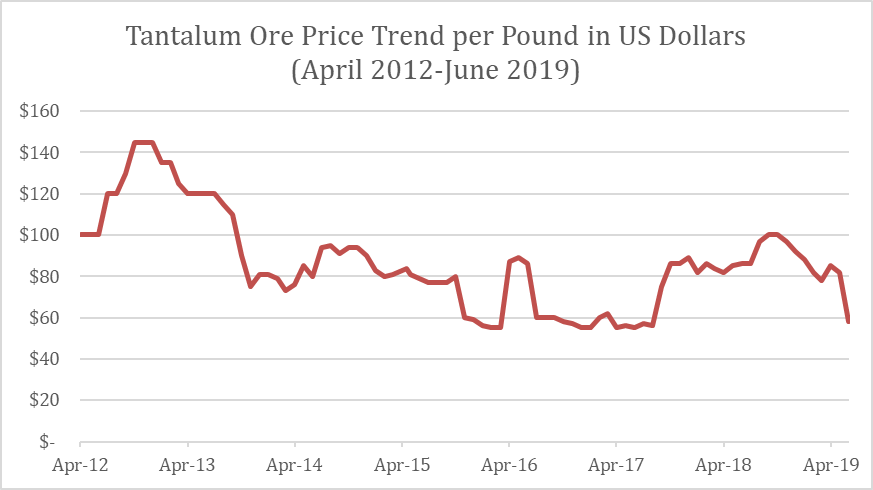 Etched anode foils represent the most expensive component involved in aluminum capacitor construction, followed closely by etched cathode foils. This fact explains why most of the larger aluminum capacitor manufacturers have in-house capabilities to produce their own etched anode and cathode foils, ultimately helping the capacitor manufacturer to control costs. Rolls of etched anode and cathode foil are rolled together with specialty paper, separating the two metal foils. The paper is then soaked in the electrolyte, and the entire cell is placed in an aluminum case with lead wires attached and gaskets placed atop the can.

Aluminum comes from alumina, also known as bauxite, and is the primary substrate material for almost all thick film chip resistors and many axial and radial leaded resistors as well. Aluminum remains in abundant supply; its price (while subject to variations) has remained relatively stable over time and remains well below its 2012-2013 highs. Aluminum consumption should remain in a steady state of growth as more is used in automotive bodies in coming years.

Aluminum Price Trend: Aluminum electrolytic capacitors are important components consumed in power supplies, television sets, computers and power electronics, including renewable energy systems. The overall price trend for aluminum between April 2012 and June 2019 has been stable, with prices spiking in 2019 due to trade tensions between the U.S and China, but quickly returning to normal (see Figure 1.6).

Resistors represent more than 90 percent of the global consumption volume for ruthenium metal (alongside some additional uses as a cracking catalyst, a hard disc drive coating and some esoteric chemical compounds). Therefore, this metal is very sensitive to any changes in resistor supply and demand across the global high-tech economy, and its value as a signpost for current market conditions should not be overlooked by the salient market analyst.

Ruthenium has experienced a significant price increase from $40 to $250 a troy ounce, corresponding with shortages of thick film chip resistors in 2019. This price increase has caused customers to seek alternative resistor designs, also based on nickel. 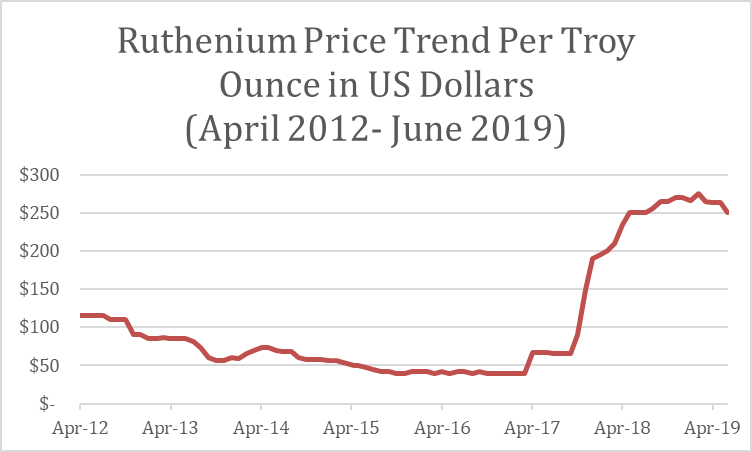 The price stability of nickel and copper over time bodes well for their continued use as MLCC electrode and termination materials. Nickel and copper will continue to displace volatile metals, such as palladium in alternative PGM-type MLCCs. This bodes well for nickel electrode powders and pastes, copper termination powders and pastes, and ceramics such as X5R and X6S formulations.

Tantalum should also continue to grow as an alternative dielectric to high-capacitance MLCCs.

Volatility in palladium and ruthenium prices will continue to drive designers away from the use of these metals in electronics, with the severe ruthenium price increase in 2019 causing many to seek alternative component designs employing nichrome elements instead of precious metals.

This analysis clearly points squarely toward a continued use of materials systems that demonstrate price stability and an abundance of supply.