Modules and balancing of supercapacitors

Find out what supercapacitors are, its construction, and useful notes for its series connection into modules.

Supercapacitors, also known as ultra-capacitors or electrical double layer capacitors (EDLCs), are rechargeable energy storage devices that do not require chemical reactions to store energy. As compared to conventional capacitors, these components have higher energy densities and do not contain moving ions. Supercapacitors do not store chemical energy and offer several benefits over traditional secondary batteries.

Since supercapacitors have lower energy values compared to traditional batteries, they are rarely used as primary electrical energy storage devices. They are commonly used in many applications as auxiliary power sources to complement fuel cells and secondary batteries. With advancements in supercapacitor technologies, the specific energies of these components are increasing making them potential alternatives to battery-based energy storages devices.

Construction and characteristics of supercapacitors

Unlike conventional capacitors, a supercapacitor does not have a dielectric material between its electrodes. The electric double layer that forms on the surfaces of the two electrodes works as the dielectric material and provides capacitance ratings up to several orders of magnitude higher than aluminum electrolytic capacitors. In addition, electrical double layer capacitors have higher power density compared to conventional batteries.

When designing an ultra-capacitor-based power system, it is critical to consider many factors including the voltage management system, model for the supercapacitor, topology of the power system, and the dynamic terminal behavior. Many manufacturers design customized supercapacitor modules to meet the requirements of a specific application.

Supercapacitors have low cell voltages, typically 0.9to 3.3V, and they are commonly connected in parallel or series to form modules. When connecting supercapacitors in series, it is important to ensure that there is equal distribution of cell voltage.

Consider a system in which two supercapacitors with same part number are connected in series. Despite the components being similar, their insulated resistance and capacitance can be different. These variations in capacitance and insulation resistance can cause a voltage imbalance that can lead to overvoltage to one supercapacitor. 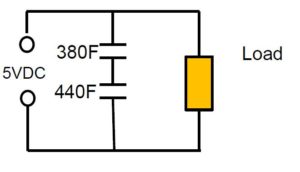 Conventional batteries have a shorter operating life compared to supercapacitor-based energy storage devices. The electrochemical reactions that occur in a battery during charge/discharge cycles can cause significant degradation. This degradation limits the number of cycles. In comparison, supercapacitors modules offer excellent durability to cycling since no electrochemical reactions are involved.

Supercapacitors life is however directly impacted by the overvoltage, thus a selection of balancing method may be a critical factor for the supercapacitor module life prediction.

Rule of thumb by lifetime prediction is: 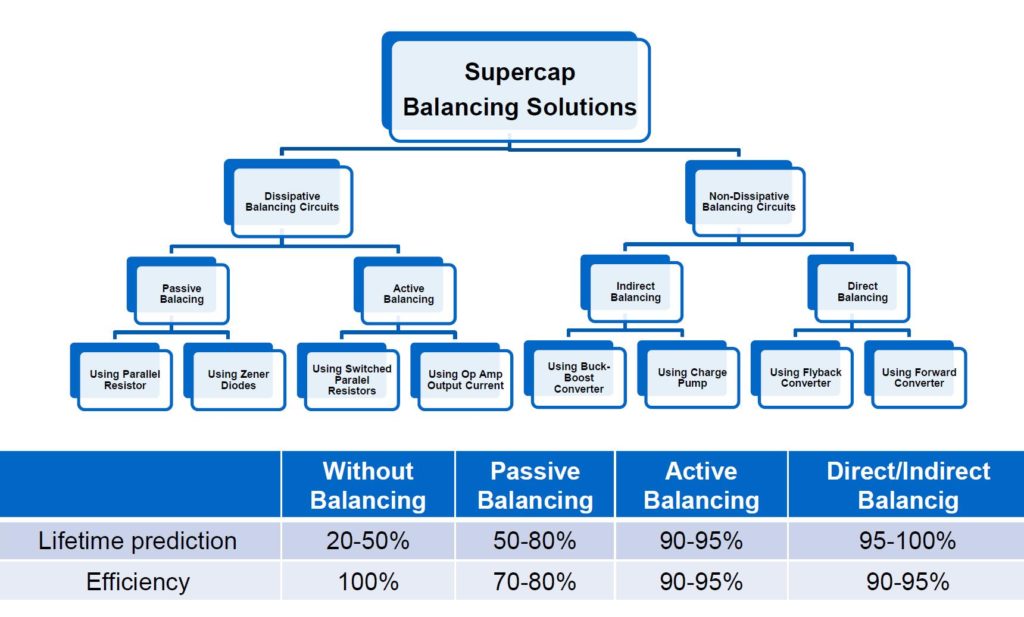 Because supercapacitor modules offer higher power densities than ordinary batteries, they can discharge more power, and this makes them a suitable choice for applications where high-peak load leveling and high-power backup are required.

Although supercapacitors offer many advantages over traditional battery-based energy storage devices, they have some drawbacks. To start with, the specific energy of electrical double layer capacitors is lower than that of batteries. Secondly, voltage imbalances in supercapacitor modules can cause significant reductions in available energy and/or premature irreversible deteriorations.

A significant amount of energy is lost when electrical energy is being delivered from the source to the load. Since supercapacitors have low specific energies, they demand more efficient means of delivering the stored energy to minimize wastage. Improvements in supercapacitor technology are expected to provide solutions to some of these drawbacks.

Calculating for KVA in Single and Three Phase Trafos