for Energy Harvesting Technologies in IoT

Energy harvesting technologies, such as indoor solar cells, are gaining popularity in battery-powered Internet of Things (IoT) devices, commonly found in applications like wearables and SmartCity ecosystems. The reason is simple, it is expensive to replace batteries in IoT devices, and energy harvesting technologies can be leveraged to make those same IoT devices battery-free. It is expensive to replace these batteries because there are typically many devices deployed over a large area. These IoT devices are typically used on edge (a.k.a hard to reach places).

There are several types of energy harvesting technologies common to the market. According to Magnetic Nanostructured Materials, 2018, “Energy harvesting (EH) can be defined as a process wherein the sources such as mechanical load, vibrations, temperature gradients and light, etc., are scavenged and converted to obtain relatively small levels of power in the nW-mW range [1–3].”

While gaining popularity, there are two major challenges to overcome. First, they lack the peak-power capability to transmit data. Second, they are an unreliable (intermittent) energy source.

A Lack of Power

Energy harvesting technologies provide enough power for devices in their sleep state. Still, too little power to wirelessly transmit data (via Bluetooth, Wi-Fi, cellular options) from the edge it is collected from. In other words, the energy harvesting technology might include power sensors on the IoT device to collect information but cannot send that information anywhere usefully or impactful.

For example, an IoT device (such as an air quality monitor in a SmartCity application that takes 6 measurements per hour and transmits data one time per hour) might draw:

Even in an ideal environment, energy harvesting technologies lack the peak power capability required when transmitting data. For <1% of the time, something 150x more powerful is needed. As new features and capabilities are added to IoT devices and deployed in more extreme/remote locations, more power will be needed.

For example, a solar cell might generate 150mW in full direct sunlight but only 50mW in a shadow (66% less). A vibration energy harvesting device might generate 35mW at 50Hz, but less than 5mW at frequencies less than 48Hz or greater than 52Hz.

This forces designers and engineers to reconcile an engineering tradeoff. They can choose to either starve their load of power when no energy is being harvested (like a solar cell in the dark), or they can add energy storage to their product (which they were trying to avoid by using an energy harvesting technology).

While energy harvesting technologies are gaining popularity, they require an energy storage device to overcome their lack of power and intermit nature. While batteries can be used, their short cycle (or service) life is less than ideal given the cost to replace batteries. Supercapacitors have become increasingly attractive solutions as they can provide more than enough power for data transmission and have very cycle life. Supercapacitors face the challenge of being restricted to use on printed circuit boards, where space is limited. 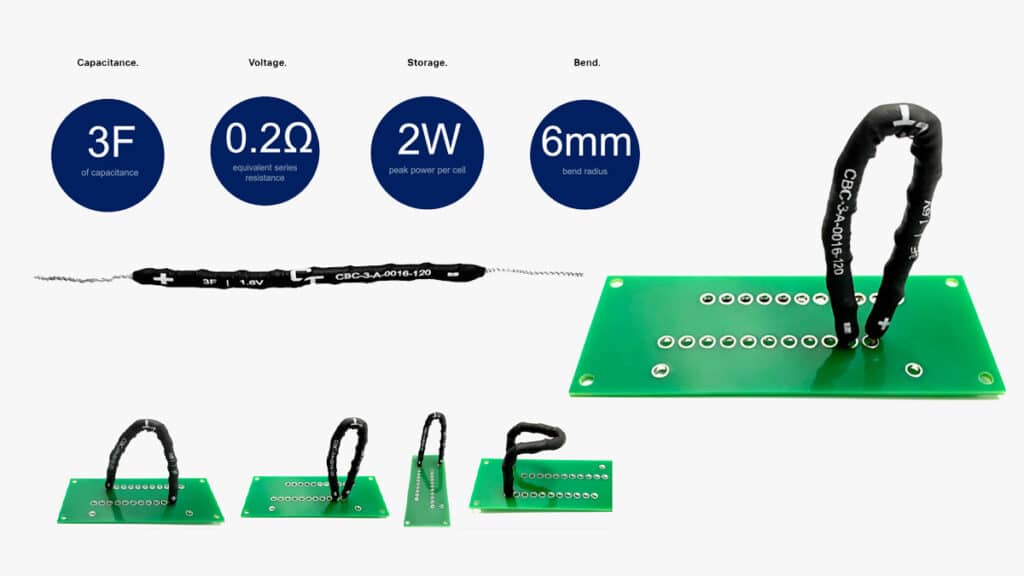 Capacitech’s flexible supercapacitor, the Cable-Based Capacitor (CBC), has space-saving advantages over traditional supercapacitor technologies. It can be routed around printed circuit boards to use little to no real estate (surface area) on the circuit or can be used off-board and inside the infrastructure of the product or system.

The Cable-Based Capacitor (CBC) is a flexible supercapacitor (energy storage device) featuring over 3F of capacitance. It is designed to be used where no supercapacitor has gone before, of the printed circuit board (PCB) and integrated into other parts of a product or system, such as inside a wiring harness, where it can charge and discharge its power or energy very quickly. 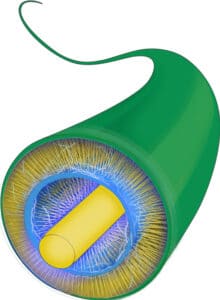 Why is it unique?

The CBC is unique because of its flexible and wire-like form factor. While traditional supercapacitors are rigid and restricted to use on a PCB, the CBC is leveraging its flexible and wire-like form factor to build a discrete and distributed network of energy storage throughout the world’s infrastructure; inside of wiring harnesses, power cords, shoes and other wearables, electronics enclosures, etc… The CBC also takes up less surface area on circuit boards than traditional supercapacitors too.

Where can it be used?

The CBC is best in energy storage applications where there is a size, space, or aesthetic constraint on the product or system.

See Capacitech web site for more details and the video demonstration of an application example. The CBC is now also available at Mouser Electronics here.