Resistors have traditionally been manufactured by a variety of methods and technologies, including metal and metal-oxide film, metal foil, carbon, wirewound, and thick-film methods. Each has specific characteristics that make them more or less suitable for high-temperature applications. Resistor degradation at a high temperature can vary from a small resistance change over time to a catastrophic change in resistance, exhibited by either becoming open circuit or, in some cases, a short circuit.

Although the thought of as a mature technology, many wirewound resistors actually fare quite well in high-temperature applications up to ambient temperatures of 200 to 250°C and above. Of relatively simple construction, wirewound resistors are made by winding a resistance wire (such as Nichrome, which has very good high-temperature characteristics and is often used in heating elements), onto an alumina or steatite ceramic core, and welded to metal end caps press-fit onto each end.

The resistor is typically insulated and made weatherproof by encapsulating the unit using vitreous enamel (glass), silicone, cement, or epoxy compound. The encapsulation material is often the “weakest link” and can be the source of failure at high temperatures. This can be the result of a difference in thermal expansion coefficient causing cracks in the coating and allowing humidity or moisture ingress, initiating stresses on the underlying wire, or due to decomposition or degradation in its insulating properties at high temperature. As a result, epoxies generally aren’t best suited for long-term high-temperature applications, but silicones and vitreous enamel materials function well.

Vitreous enamel-coated resistors create a near hermetic package and provide additional protection in hazardous environments that occasionally can be associated with high operating temperatures, especially in the oil and gas industry. One caveat, though, is that the bulk resistivity of the enamel-coating material tends to drop significantly at high temperatures, and it’s been known to affect the overall installed resistance as the insulation properties are significantly reduced with increasing temperature.

The high-temperature stability of vitreous enamel-coated wirewound resistors is quite good, exhibiting resistance changes of around 1-2% upon exposure to 200°C for 1000 hours, with typically larger changes for other wirewound resistor types. One downside to wirewound resistors is their limited upper resistance range, inherently associated inductance (although this can be greatly reduced by specifying a non-inductive “Ayrton Perry” winding, which essentially winds two wires in opposite directions around the core to cancel inductance), and their relatively large size. As a result, other resistor types hold more promise for high-temperature operation.

Thick-film resistors have received a significant amount of attention for high-temperature applications in recent years. These resistors are made by depositing a blend of metal and particles onto a ceramic substrate and firing at a high temperature (typically 850°C or so in the air) which creates a conductive cermet matrix. Thick-film conductor formulations for high-temperature use are typically gold, palladium-silver, or platinum-silver (Fig. 1). After laser trimming to value, a layer of glass insulator is often applied on top for environmental protection. Thick-film resistors can be made quite small, routinely down to 0201 or smaller in surface-mounted sizes. 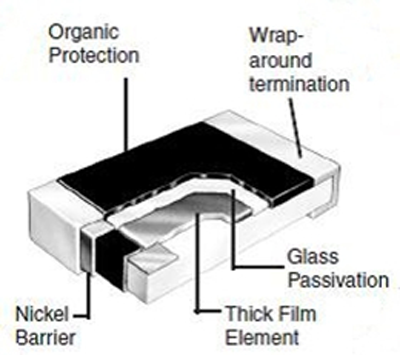 For thick-film resistors, the typical temperature coefficient of resistance (TCR) is approximately ±100 ppm/°C over normal temperature ranges, but it can be (and often is) dramatically nonlinear as the temperature deviates from normal ranges (Fig. 3). However, even if we assume a TCR of 100 ppm/°C, operation at 200°C above ambient can result in a perceived resistance change of as much as 2% simply due to the temperature excursion—and possibly much more depending on the actual TCR characteristics at higher temperatures. As a result, more precise applications may require thin-film networks or wirewound resistors. 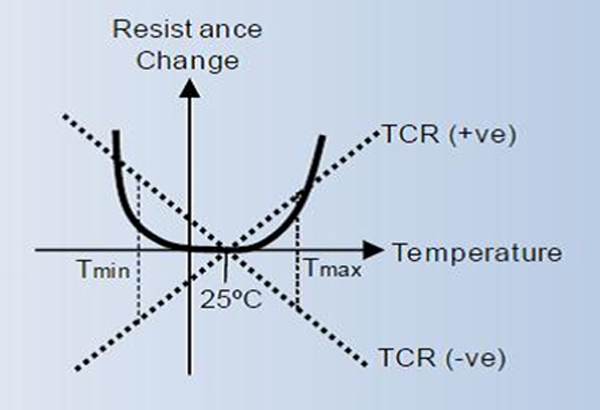 The thin-film resistor material of choice is typically either a nichrome alloy or tantalum nitride. Both of these materials (see table) tolerate high melting points, which tend to result in less microscopic grain growth at high temperature and are highly resistant to oxidation—two potential sources for significant resistance change at high operating temperatures.

The table illustrates the characteristics of common thin-film resistor materials.

Both resistor films offer good resistance stability and excellent low TCR at normal operating temperatures which carry over to some extent at high-temperature operation. In addition, they both possess a relatively linear TCR curve over a wide temperature range (Fig. 4). Although the data shown is for a nichrome-alloy metal film resistor, similar characteristics are seen with the tantalum-nitride materials. An additional benefit is illustrated in the graph, which demonstrates the close TCR tracking or matching between the resistors in the common network (in this case, a 7-resistor network).

Fig. 4. The TCR of thin-film resistors in a DIP network is shown at elevated temperature.

One intriguing aspect of thin-film resistors is that a significant amount of the total resistance change occurs during the first 100 to 200 hours of operation (Fig. 5). Various mechanisms, such as oxidation, migration of metallic layers, or metallic diffusion can cause this resistance change.

Fig. 5. The thin-film resistance shift with time at elevated temperature reveals that a significant amount of total resistance change occurs during the first 100 to 200 hours of operation.

Fig. 6. This resistor network is similar to that as in Figure 5, but with a 200°C, 148-hr bake added. The image depicts a reduction in the resistance change, reduced to less than half over 1,000 hours of exposure, significantly improving overall resistor stability.

Figure 6 also demonstrates another important characteristic: All of the resistors in the common network track each other very well over time and temperature. This makes it possible for very accurate resistor divider and voltage ratio networks to provide excellent performance, even at elevated temperatures.

It almost always lowers the cost to specify a resistor network with two or more resistors (of different values) that track each other well, rather than using individual resistors that will give similar tracking and matching performance. Figure 7 illustrates the typical ratio tolerance performance of a high-temperature resistor network—the difference in ratio performance is within 0.005% (50 ppm) over life. 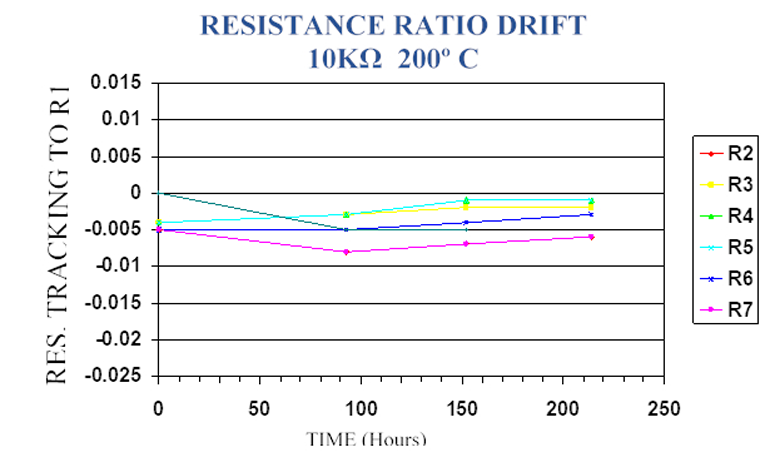 Fig. 7. The plot illustrates the ratio drift between resistors in a high-temperature resistor network.

Thin-film resistor networks can be purchased in a variety of package configurations, such as SOT23, SOT147, SOIC, QSOP, BGA in SMT, along with the mature through-hole packages like SIP/DIP configurations. The 3-terminal (2-resistor) 1206 divider package shown in Figure 8 offers outstanding high-temperature performance and excellent resistor tracking over time and temperature. Both gold and solder terminations allow flexibility in the attachment. 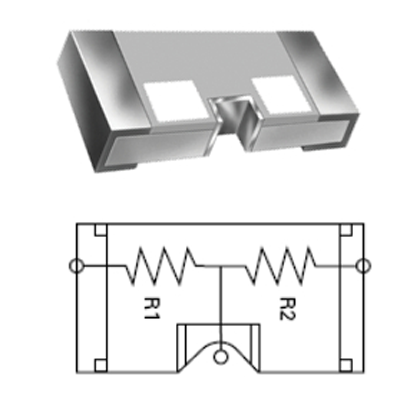 Proper selection of resistors for high-temperature applications is critical for optimum performance and economy. Although many resistor technologies are available to the circuit designer, knowledge of each type’s characteristics and construction is necessary to make the best selection.

EMC Filters – From component to design

Controlled Non-Linearity of Graphene May Yield