Capacitors have a broad range of applications in audio circuits and systems. One of the main subsystems of a typical audio system is a crossover network. A crossover network is used to separate an audio signal into different frequency-dependent components. The separated components are then sent to specific driver circuits and speakers. The placement of this circuit can vary depending on the design of an audio system.

Why the components of an audio signal are separated

Similarly, the low-quality sound output is obtained when a single speaker is used for the entire audio frequency. To prevent signal distortion in audio systems, most of today’s speakers are designed to operate optimally for a specific audio frequency range. This means that a combination of different speakers is required for optimum performance of an audio system.

Using a single diaphragm for both bass and treble makes it difficult to lower distortion in an audio system. This characteristic makes full-range audio devices unsuitable for systems in which high-quality output is desired.

The design of a diaphragm has a significant effect on the quality of the sound produced by a loudspeaker. To start with, low frequencies are known to introduce harmonic distortion in the diaphragm. The low frequencies also cause inter-modulation between treble and bass.

The distortion caused by low frequencies can be reduced by decreasing diaphragm excursion. This requires the diaphragm area to be increased. High-frequency reproduction worsens with an increase in the size of a loudspeaker. To overcome these challenges, it is necessary to separate the components of an audio signal into different components and use audio devices that are optimized for limited audio frequency ranges. 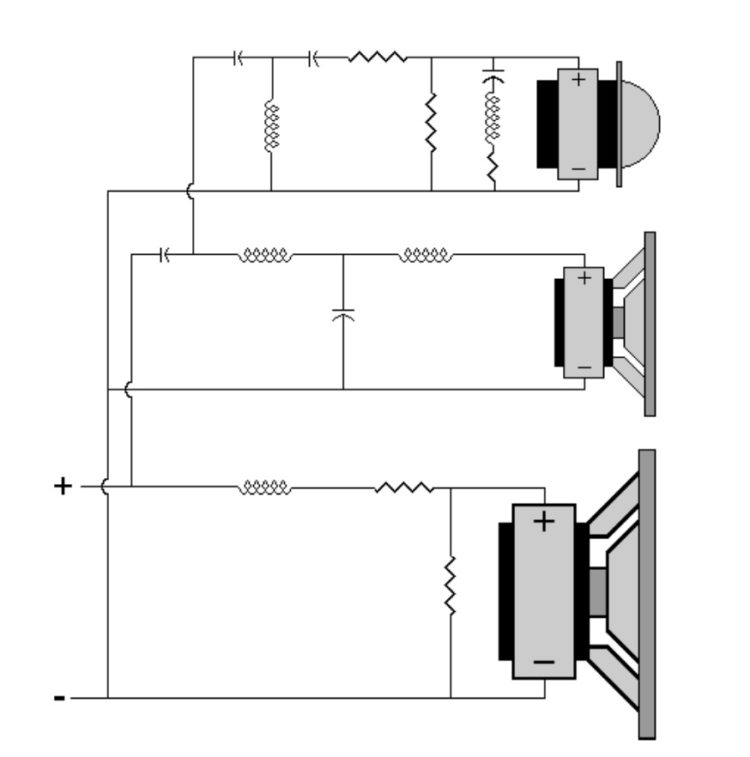 Filters, low pass and high pass, are the building blocks of crossover networks. These sub-circuits consist of capacitors, resistors and inductors in different configurations. These passive components are selected and configured depending on the frequency range of the audio component.

Although various passive components are used in a crossover network, the overall performance of a circuit is mainly determined by the capacitors used. In most crossover networks, inductors and resistors of fixed values are used. Furthermore, there is no need to replace these passive components (inductors and resistors) when upgrading a network. The only time replacement is needed is when a component is damaged.

Aluminium electrolytic capacitors come in a variety of designs but they are not widely used in audio applications. However, the characteristics of these components make them a suitable choice for some audio applications. When operated at a high voltage and high frequency, the temperature of an electrolytic capacitor can increase rapidly. As such, it is important to consider the temperature characteristics of a capacitor when selecting a capacitor for a crossover network.

For special miniature designs such as mobile phones, music players, hearing aids also tantalum/NbO capacitors can be considered, providing excellent audio performance with high stability and reliability. Nevertheless, these are polar devices that has to be considered in the design and thus not preferred in many applications.

Ceramic capacitors have a broad range of applications in today’s audio systems.

However, their performance characteristics make them unsuitable for use in crossover networks. To start with, these components are susceptible to microphonic effects. This occurs when a ceramic capacitor converts mechanical vibrations into electrical signals. These unwanted electrical signals can significantly distort audio signals.

Film capacitors are widely used in audio circuits for a wide range of applications. For the optimum performance of a crossover network, film capacitors with low dielectric absorption and equivalent series resistance are commonly used. The characteristics of film capacitors make them the number one choice for audio applications. It is common for circuit designers to use a combination of different types of capacitors.

Audio devices that are optimized for narrow frequency ranges produce better sound output when compared to full-range audio devices. Audio crossover networks are used in audio systems to separate the different components of an audio signal. The separated components are then sent to different hardware devices (drivers and speakers). This separation helps to optimize the quality of output produced by an audio system. Capacitors are widely used in audio crossover networks. Some of the characteristics of a capacitor that greatly determine the performance of a crossover network include equivalent series resistance, dielectric absorption and insulation resistance. The impressive characteristics of film capacitors make them an unrivalled choice for crossover networks.

the article has been modified from its original content