Resistor manufacturers are experiencing price increases in the key feedstock metal ruthenium as they enter the June 2021 quarter (April 1 through June 30, 2021). This Dennis Zogbi’s, Paumanok Inc. article published by TTI MarketEYE correlates the impact higher metals prices have on mass-produced resistor components consumed in all printed circuit boards, focusing on growing pressure in a critical part of the global high-tech economy.

These massive economies of scale, low price and concentration of manufacturing place thick film chip resistors among the most challenging electronic components to produce. Their exposure to the platinum group metal supply chain through their long-term association with the precious metal ruthenium makes cost pressure on thick film chip resistors one of the most significant risk factors facing the new high-tech economy fiscal year.

Thick film chip resistors are manufactured through the screen-printing of ruthenium oxide paste on an alumina ceramic substrate. These substrates are usually 96 per cent purity alumina, an extremely durable ceramic that must be trimmed with a laser to form the desired rectangular chip shape and the desired ohmic value.

Ruthenium oxide pastes are manufactured by mixing ruthenium precious metals with an inorganic binder. After the ink is screen-printed, the resistive layer dries under low heat. Following the drying or curing process, the chips are fired at high temperatures to permanently adhere to the resistive layer to the ceramic alumina substrate.

The final step is the termination of the chip, which is done via a bulk dipping and plating method and which involves the metallization of the chip end-caps with a silver-bearing termination paste, covered with a nickel barrier and lead (Pb) solder so that the product can be soldered onto the board.

The technology to manufacture thick film chip resistors is easily reproducible for lower ohmic value applications and is highly automated from start to finish. The variable is the massive economies of scale required to compete.  Therefore, pricing is extremely (almost unreasonably) low, and chip resistors are liberally designed into electronic circuits.

Thick film chip resistors represent what is termed “a rendered economy,” defined as a product economy where other manufacturers do not wish to compete because of hurdles regarding return on investment/profitability, technology and/or massive economies of scale.

A detailed analysis of the thick film chip resistor market reveals that the barriers to entry are the massive economies of scale required to compete (i.e. a large investment in capital equipment) and a skinny profit margin. Chip resistor production in the U.S. and Europe is almost non-existent, especially for thick film chips, because of the low costs and the return on investment.  Small quantities of thick film chip resistors are manufactured for Western consumption in Israel. Still, most thick film chips are produced in Greater China and Japan, with minor additional production factories located in Malaysia, Thailand, Korea and the Philippines.

The Variable Cost of Raw Materials in Component Production

This product is ubiquitous and designed into every printed circuit board manufacturing, regardless of end-market. Therefore, vendors should look at thick film chip resistors as a potential risk factor.

The risky nature of thick film chip resistors is their reliance upon ruthenium in their resistive pastes (Ru02). Ruthenium is a by-product of platinum mining in South Africa. Workers’ strikes have plagued platinum mining, and this is, in turn, impacting the volume of metal above ground and, subsequently, the price, which increased to USD 330 per troy ounce in February and $400 per troy ounce in March 2021.

The variable cost associated with raw materials is the largest single factor associated with the overall cost of producing thick film chip resistors. Other variable costs include overhead and labour – but historically, over 30 years, the fluctuations in the price and availability of certain metals have had the greatest impact on the thick film chip resistor supply chains and have posed the greatest risk of price increases for customers or loss of profitability for component manufacturers. This risk includes both the ruthenium metal and the ceramic alumina substrate.

Resistors represent more than 90 per cent of the global consumption volume for ruthenium metal (with some additional uses as a cracking catalyst, a coating for mechanical hard disk drives and some esoteric chemical compounds). Therefore the metal is susceptible to any changes in the global high tech economy. Its signpost on the current market conditions should not be overlooked by the electronic component and electronic material market analyst who reads this document. 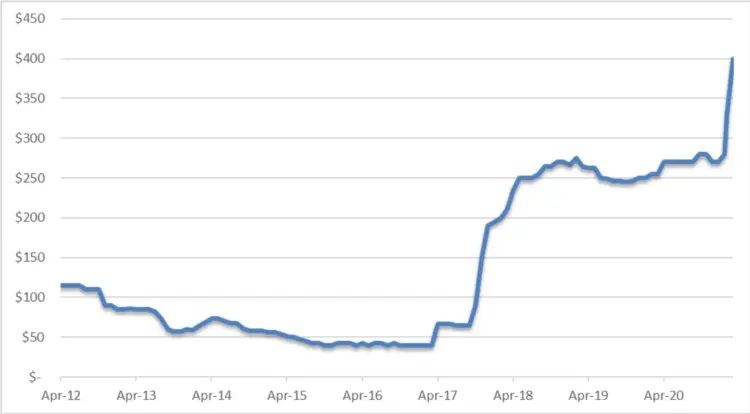 The variable cost associated with raw materials makes passive components somewhat unique because the supply chain must rely in whole or in part upon outside merchant market vendors and engineered materials processors to supply the engineered powders and pastes to produce their passive electronic components.

Historically, changes in metal prices and availability have proven to be the greatest risk factors in the cost to produce both mass-produced capacitors and resistors – each in the trillions of pieces.

In recent months, the prices of ruthenium and palladium have reached levels that have not been seen for years. The recent price hikes in these key materials should begin to impact prices for any new RFQs in the critical 2022 fiscal year.

Variable raw material costs average 44 per cent of the costs to produce for the multi-billion worldwide resistor industry. Any substantial price increase in feedstock metals consumed here will have an eventual impact on thick film chip resistor pricing and availability (see Figure 3). 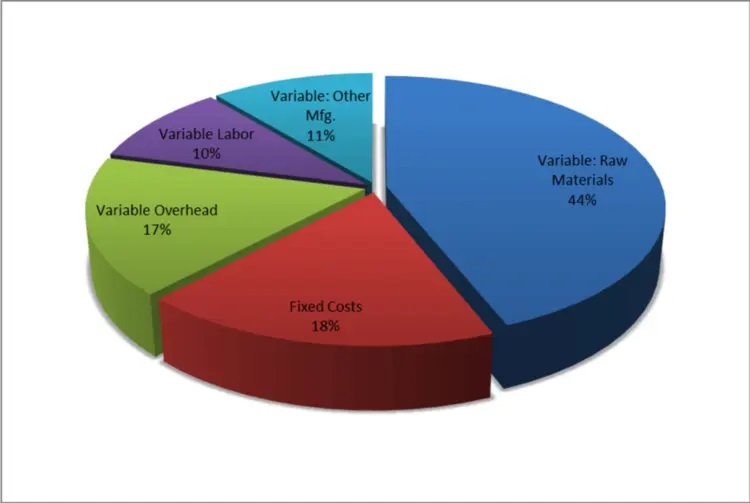 Unprecedented increases in the price of ruthenium, a key element in the production of thick film pastes used in thick film chip resistors, has resulted in extended lead times for the ubiquitous resistor component. Because of the large percentage of variable costs in the production of chip resistors relying on raw materials, expect price increases and short supply for the rest of CY 2021 and FY 2022. The reasons for these price increases can be traced directly to trade disputes in South Africa regarding platinum mines; ruthenium is a by-product of platinum mining.