There are a vast array of power supplies on the market, and the variety of resistor applications in those designs broaden the selection dramatically. So, for the purpose of this article, power supplies will be referred to as devices that have fixed DC outputs up to several kV.

Whatever the application, power supply designers must be aware of specific regulations on safety or the environment that apply to the area, as well as the actual electrical performance. This article will look at the use of resistors in regulating the supply output and protecting the supply from faults.

The nomenclature of power supplies is often taken from whether the input is AC or DC, and what type of regulation is used to provide the correct DC output – normally switched mode or linear. Mains voltages usually power AC-DC supplies, while a DC-DC supply could be powered from a battery or any other DC power source. These DC-DC converters use switched mode technology to change the input voltage to a higher (boost) or lower (buck) output voltage.

Off-the-shelf power supplies are available for many markets and for general use, but in some cases a custom design is needed. Resistor manufacturers and suppliers such as Riedon have many years of experience in helping customers choose the correct component for every application.

To understand the role of the components in power supplies, it is necessary to understand the basics of how power supplies operate. Many engineers will remember designing a circuit like that in Figure 1. The circuit uses a Zener diode to provide a constant voltage to the load (R2). R1is used to provide the minimum current to keep the Zener in constant breakdown, as well as the load current.

This type of system works well for circuits that are low power and have a fairly constant supply voltage and load. If the load current reduces or the supply voltage increases significantly, then the diode may exceed its rated power dissipation. Resistors in a circuit like this are pretty easy to specify, as long as they are rated for the combined power of the Zener and load.

For power supplies that may have supply or load changes, a series design can use a pass transistor, which will ensure a regulated load current and decrease the voltage output to the desired value. Figure 2 demonstrates this type of circuit. Designs such as these normally use either an IC or a low drop-out (LDO) regulator to regulate the load supply. The voltage divider formed by R1 and R2 senses and sets the voltage output relative to a reference voltage. If the circuit has a fixed output, the divider will be located internally; for other applications, either one or both resistors may be placed externally.

Linear power supplies can be inefficient due to energy being expended in both the series pass device and the load. The inefficiency increases the higher the voltage drop over the load.

To drive up efficiency, another supply topology is often used. The switched-mode power supply (SMPS) takes the unregulated input DC voltage, and switches it at a high frequency (10kHz to 1MHz). The duty cycle determines the DC output voltage after rectification and smoothing.

The regulation of the SMPS output also uses a potential divider, but this time to regulate the frequency of switching and the duty cycle. The SMPS can achieve efficiencies of up to 95% by avoiding the losses from the linear regulator’s voltage drop. The SMPS can also be more compact than a similarly rated linear AC-DC supply, as the high frequency transformer and filter/reservoir capacitors are much smaller.

The main drawback for the SMPS is that it must have a minimum load. No-load conditions can damage the supply. To avoid this condition, designers often use a power resistor as a dummy load. This resistor is intended to draw the minimum specified load if the main load is detached. Naturally, the dummy resistor will dissipate power, which will have an effect on the overall supply efficiency and will need to be considered when specifying the resistor.

Another way to circumvent this problem is to use a shunt resistor across the output if the load goes open circuit. Other resistors are also used in SMPS designs for safety purposes. Low-ohm, high-power resistors often protect against over-voltage conditions. Current limiting designs protect against short-circuits.

This type of switching technology is also used in DC-DC converter designs to change one value of DC voltage to another. Buck converters are very similar in operation to the SMPS design described previously. Boost converters output a higher voltage than the input using charge pump techniques. Both technologies use similar ways to regulate the output voltage and for circuit protection.

Other uses of resistors in power-supply designs

Bleed resistors are mainly used to discharge capacitors in the circuit. They are situated in parallel with the load and are used in AC-DC and DC-DC converters for discharging the smoothing capacitors and reservoir capacitors respectively. The capacitors maintain their charge after the supply is switched off and can be hazardous to users. There are two main points to balance when choosing resistors for this task: they should be a high enough resistance to consume little power when the circuit is operational, while being low enough value to discharge the capacitors quickly.

Inrush limiting resistors limit the amount of current that can surge when AC-DC supplies are initially switched on and the storage capacitor is charging. These resistors are usually of a very low value and are designed in series with the AC power line. For higher-power supplies, negative temperature coefficient (NTC) resistors are often used for this purpose. These resistors have a resistance that drops as they self-heat. One downside to using this type of resistor is that during operation the temperature must be kept regular to ensure the low resistance is maintained. A third type of solution involves using pulse-resistant resistors, which are normally energy-rated in Joules. This gives a better idea of their capabilities than the normal continuous power rating that wattage designates.

Balancing resistors modulate a load current when using more than a single supply. Often, using more than one DC-DC converter in a parallel arrangement can be cheaper, while also being more energy efficient and compact than using a single high power supply. When designing this type of circuit, it is not possible to just tie the outputs together; there must be a way to ensure the load is shared equally. Figure 3 shows the R SHARE resistors taking up the slack between the converter outputs. 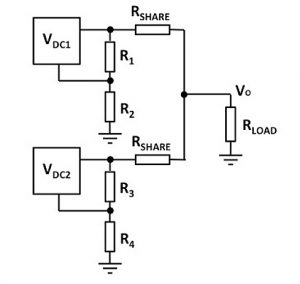 This method of load sharing is also used in other types of power-supply designs, especially those using power transistors. Multiple transistors in parallel supply the load, and load-sharing resistors are used in series.

Another occasion where balancing is required is shown in Figure 4. In this scenario, reservoir capacitors are designed in series to the DC supply output. The electrolytic capacitors’ leakage currents act like a resistance in parallel with the capacitor, RL1 and RL2 in the diagram. These resistance values can vary considerably, and since they act as a voltage divider across the output it can cause a voltage disparity across the capacitor, potentially exceeding the capacitor’s rating. Matched resistors RB1 and RB2 counteract this effect. 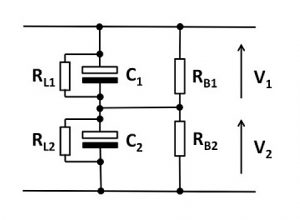 High voltage dividers are used to provide the feedback to the regulation circuit. These resistors can often have a secondary purpose, such as monitoring the high voltage supply in defibrillators, charging the storage capacitor and switching off the supply at the desired charge level.

High current sensing is used for measuring the supply current. The measurement is made using shunt ammeter principles, where a low value resistor is placed in series and the voltage drop is measured to calculate the current. A designer of this type of circuit must choose between a low value resistor to minimize heat generated and the loss of power, and a high resistance for easier measurement.

Almost every application for resistors in power supply design has different specification priorities and performance requirements. These include resistors that need to be able to handle high voltage, current and power, as well as ones that require low tolerances. Often specialized attributes are needed, like surge capability or negative TCR.