Ove Hach in his EDN article explains effect of resistor TCR tracking and its precision requirements with respect to analogue and A/D signal processing tasks.

The progress in digitization has profoundly changed our lives. There is no area of everyday life to which digital circuits haven’t penetrated. Ever more powerful microcontrollers and data converters make let you convert analog signals into high resolution digital signals. What do you need to consider in selecting the resistors for the upstream measurement amplifier? What possible errors can you avoid so that the analog circuit fits with the digital circuit?

In most cases, analog signals are determined by the ratio of impedances to one another. Hardware developers, who understand the advantages of precision analog electronic circuits that are stable over the long term, can utilize the full resolution of a digital system. This article concentrates on linear fixed resistors in the discussion of impedances.

Digital A/D Conversion Digitization converts a continuous signal into one that has discrete values represented with bits. Table 1 shows the characteristics of digitizing signals from 2 bits to 24 bits. The resolution of an A/D converter plays another role in subsequent considerations. 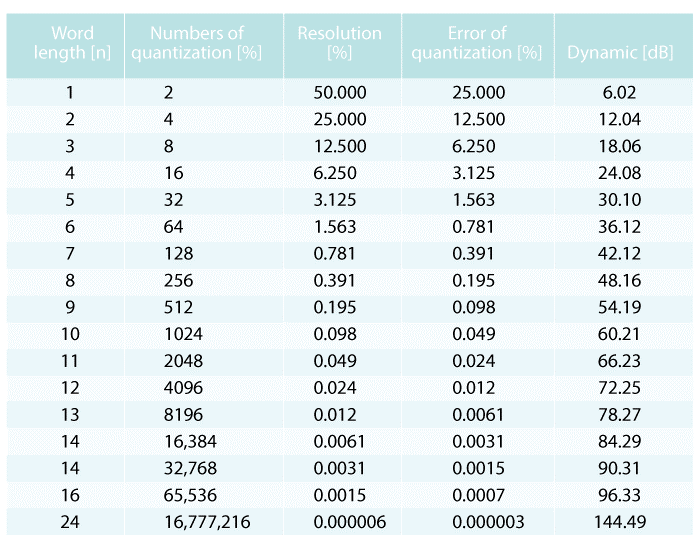 Table 1. The most important parameters of A/D converters and their corresponding values from 2 bits to 24 bits.

When it comes to measurement, Information is not always available as a digital or a frequency signal. The signal amplitude must be decreased to a level suitable for the A/D converter using a voltage divider or increased using an amplifier. The scaling factor of a voltage divider or the gain factor of an operational amplifier is determined by the relative behaviour of both resistors. This means that, as long as both resistors behave equally well or equally poorly, the ratio of both resistors is always the same and, consequently, the circuit is decoupled from the properties of the resistors. Resistors, however, never have the same properties. Thus, the ratio of the resistors changes with the ambient temperature, power dissipation, and ageing at different film temperatures.

The Effect of TCR Tracking 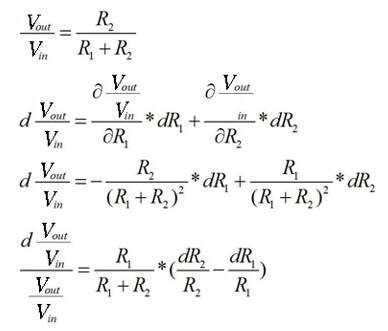 Assuming that the resolution of the A/D converter corresponds to the permissible error and that both resistors experience the same temperature change, the following approximation equation is obtained by permutation according to the required TCR tracking.

You can use a spreadsheet to estimate the necessary TCR tracking of both resistors in a voltage divider. Your TCR estimation for the resistors can occur with respect to each other as a function of the desired accuracy and over a specified temperature range.

In applications that run in the immediate vicinity of the reference temperature, such as audio, the necessary TCR tracking shows that correspondingly large deviations are allowed between the temperature coefficients. If, however the accuracy requirements are stringent, the use of high grade thin film resistors is recommended at temperature fluctuations of about 10 K. See Table 2. 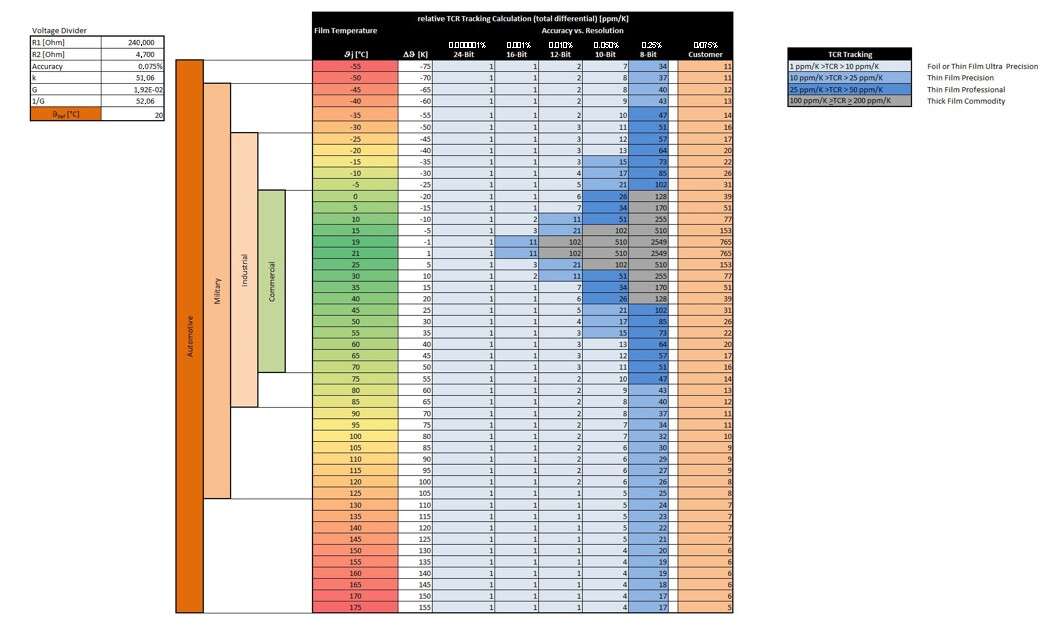 Ambient temperature and power dissipation will stress resistors in circuits. In such applications, their resistance value changes at different rates and to a greater or lesser degree depending on the temperature stress and resistive materials used. If resistors age differently due to temperature differences, the scaling factor of a voltage divider will change over the service life. To minimize the costs of quality and calibration, it is necessary for precision measuring engineering to consider resistors having the same temperature coefficients and tolerance pairing.

Figure 1 shows a ceramic substrate for chip array resistors. At least two resistors having the same properties are present on each individual chip array. In this example, we have an array with four individual resistance values. 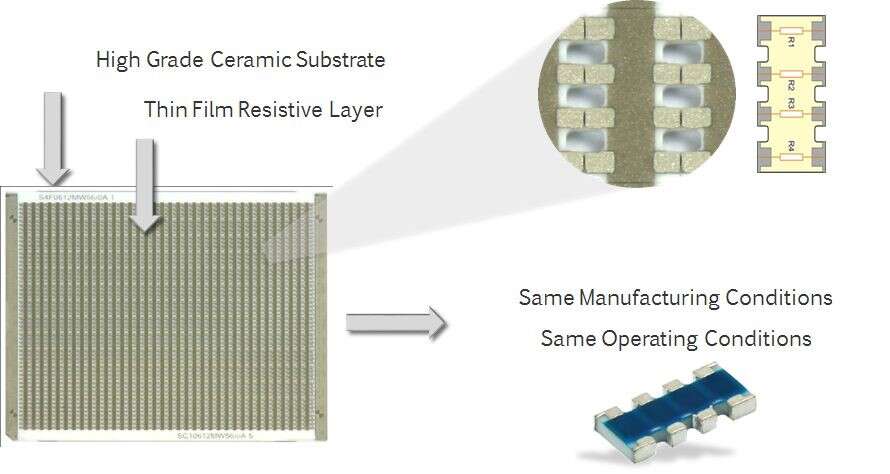 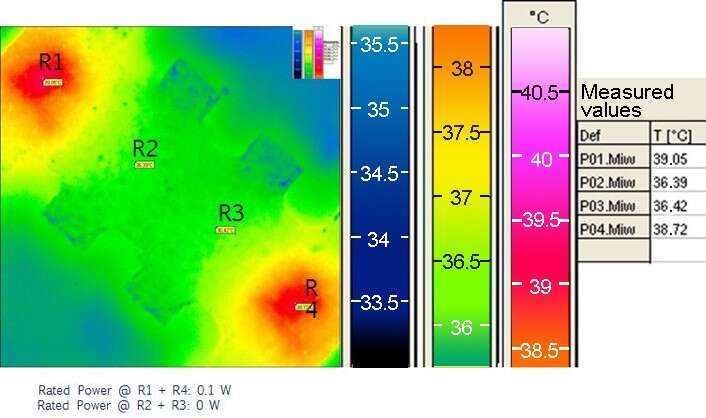 Figure 2. Resistors R1 through R4 and on the same substrate and made from the same material.

With these results, the change in the value of the individual resistors can be estimated using a drift equation and the relative drift change with respect to each resistor can be determined. Figure 3 shows that the drift for discrete thin-film resistors used in an 8-bit A/D converter is negligible but, in the case of a 10-bit converter, the LSB exhibits errors after only 5000 hours. With a 12-bit converter and beyond, the use of chip arrays is recommended because the value change of the discrete resistors exceeds the resolution even in the first hours of operation. 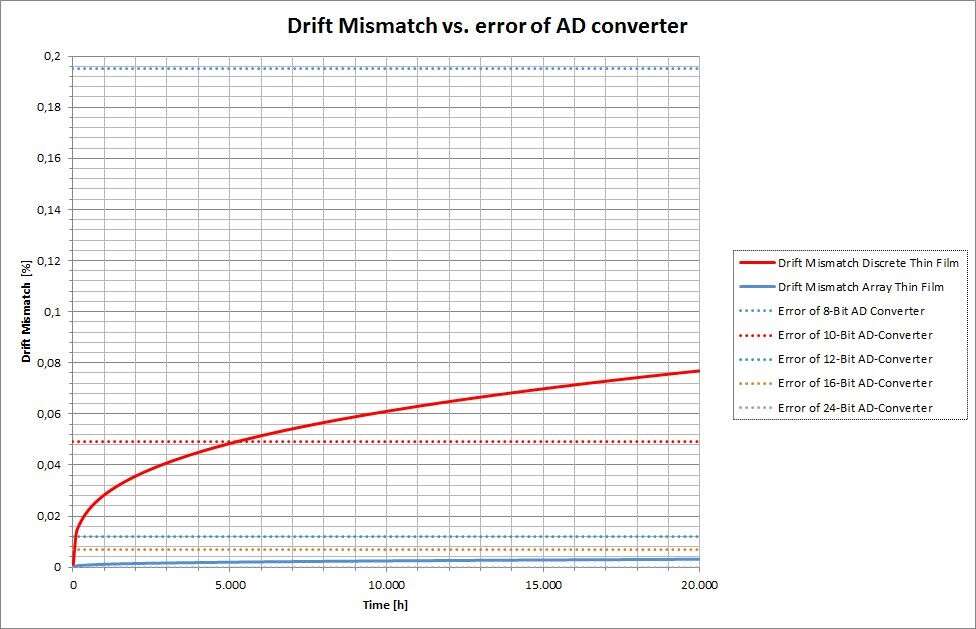 Figure 3. Mismatch of a pair of resistors occurs over time

The Effect of Tolerance

It is still worth mentioning that chip arrays can, upon request, be provided with tolerance matching. With this feature, the calibration step at the end of the electronics fabrication line can be eliminated if necessary, increasing the productivity of the SMD line.

Analog signal processing for high resolution digital systems is an exciting and comprehensive task. So that the work proceeds by hand with somewhat more structure, here are a few ground rules for handling resistors or for the development of analog circuits with high digital resolution:

Detecting analog signals and processing them for digital circuitry is used across all industry segments. No one resistor series can satisfy all segment requirements.

Crimped Connectors, What about Reliability and Testing?