A typical New Space qualification campaign is performed on a Structural Model (SM), Protoflight Model (PFM), and Flight Model (FM). Testing campaigns for any kind of small satellite or subsystem include:

Other more specific small sats tests needed may include:

The typical test flow of a new space qualification campaign is:

SRS is more aggressive than VIB and if the CubeSat is not ready to pass SRS, it is preferable to know it from the beginning. 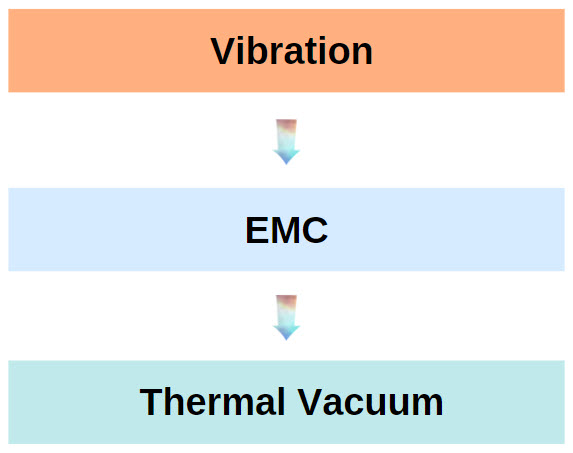 TVAC is typically the last test (see below) because it includes a bakeout. VIB might also be a destructive test, so you want to perform it soon. Therefore, the typical flow is:

It is important to mention that while Structural Model (SM) does not require cleanliness conditions, Protoflight Model (PFM) requires at least ISO8 cleanliness or even ISO5 for optical payloads.

ISO 8  is the least clean cleanroom classification. A cleanroom must have less than 35,200,000 particles/m3 particles > 0.5 µm and 20 HEPA filtered air changes per hour.

A cleanroom is a room with a controlled environment where products are processed. It is a room in which the concentration of airborne particles is controlled to specified limits.

A New Space test laboratory needs to comply with several standards that prove the quality of the work:

Moreover, ALTER has implemented its Virtual Lab platform, an IT tool that allows:

SMALL SATELLITES
Small Sats Testing
ALTER works the New Space through the Small Sats testing, improving your time to market and at a lower cost.