How Rad-hard do you need?

Traditional radiation-hardened or “rad-hard” parts are generally considered to be capable of withstanding the most severe space environments. In fact, these devices are designed and fabricated with the specific goal of enduring the harshest space radiation environments. And while they have tremendous radiation capabilities, these parts are more expensive and less advanced than today’s commercially available components. As a result, the main customers for these ICs have generally been well-funded military and scientific entities.

However, migration from traditional rad-hard components is currently underway, thanks to the commercialization of space. Space is no longer the sole domain of the world’s largest governments, where programs are funded by enormous and eternal budgets aimed at fighting the cold war. Consequently, space manufacturers around the world are faced with a requirement to build satellites that are faster, better and cheaper than those made in the past.

To meet this rapidly changing market, satellite companies and component manufacturers alike have begun reshaping their product offerings. More specifically, semiconductor manufacturers have begun reinterpreting industry conventions to meet the needs of their newly redefined customer base. While they only comprise 5-10% of the overall cost of a satellite, electronic components can nevertheless provide significant savings to a system’s total price tag if they are procured at a reduced rate. As a result, the traditional, rigid definition of “rad-hard” is slowly being replaced by the question, “How rad-hard do you need?”

The space environment itself engenders the disparity between available vendors in commercial- and space-based designs. Space is a highly radioactive environment, the effects of which essentially destroy the functionality of most commercial ICs. There are four primary causes of this radiation: trapped electrons, trapped protons, solar protons and cosmic rays. 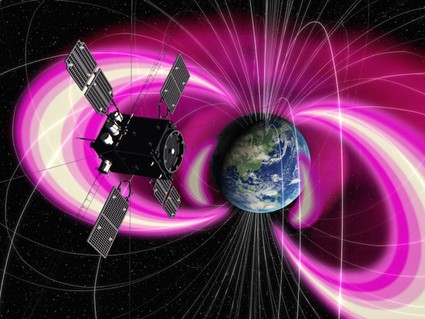 Trapped electrons are negatively charged particles that are relatively low in mass, but they are also extremely energetic. Due to their small masses, they are typically found is very high orbits such as the Geosynchronous orbits (or GEO orbits) that are approximately 36000 km above the earth.

Trapped protons are positively charged particles held captive by a planet’s gravitation field. They are less energetic than electrons, but they are approximately 2000 times more massive. They exist in high concentrations at low altitudes. For example, Low Earth Orbits (LEOs), such as those located 1400 km – 2000 km from the earth’s surface, are proton-dominated orbits.

Solar protons are like trapped protons except they are ejected from the Sun during a solar flare event and are therefore not trapped in the planet’s gravitation field.

Cosmic rays are the final source of natural space-borne radiation. They are comprised of alpha particles, heavy ions and protons. Heavy ions are the primary concern when considering the effects of cosmic rays on semiconductors because these massive and highly charged particles can cause severe damage to devices.

When an energized particle impacts a semiconductor, it deposits a small electrical charge to the silicon. The charges often migrate off the semiconductor, but over time they eventually build up on the device. Once the part has accumulated enough excess charge, it will cease to function. Total Ionizing Dose is the amount of radiation or energy that a semiconductor can absorb before it stops functioning. It is measured in rad(Si), or radiation absorbed relative to silicon. TID tolerance is based on the process used to fabricate, and the methods used to design the semiconductor.

Single Event Latch-Up (SEL), measured in mega electron volts (MeV) and dependent on a part’s design, occurs when a highly charged particle imparts so much energy to a semiconductor that the devices currently is dramatically driven out of specification. The device is said to have “latched-up” if it stays in this heightened state. At best, the part remains inoperable until it has been reset. At worst, it will become so hot that it will meltdown and destroy itself.

Single Event Upset (SEU), which is also measured in MeV, takes on different meanings for digital and analog parts. In digital parts, SEU occurs when a highly charged particle impacts a memory cell and alters the cell’s charge, essentially changing a 0 to a 1. In analog parts, a momentary spike is seen on a device’s output. Regardless of the part type, SEU is a nondestructive, recoverable event that can be mitigated in several ways. Designers are typically most concerned with SEU in memory devices because an SEU event corrupts stored data. Like SEL, SEU is dependent on a device’s design.

Rad-hard parts available in the market