Ignacio Esquivias, José-Manuel G. Tijero, Juan Barbero, Demetrio López,
Marc Fischer, Karl Roessner & Johannes Koeth
RADECS 2011 Proceedings
Abstract—We present an evaluation of the effects of proton and gamma irradiation on the performance of GaSb-based 2.1 µm laser diodes lasers for space applications.  The study is focused on the effects of radiation on the Power-Current, Current-Voltage and Wavelength-Current-Temperature characteristics of the lasers. No significant radiation damage has been found.
Introduction 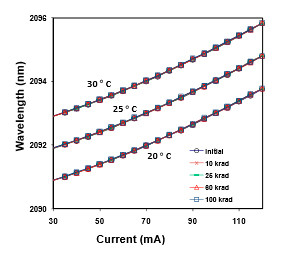 ASER diodes are increasingly used for space applications, either to pump solid state lasers, in photonic payloads, or as sources for LIDAR or spectrometric applications.   In space applications reliability issues are a primary concern and among them, radiation hardness is one of the most distinctive with respect to terrestrial applications.  A good deal of effort has been devoted to study specifically the effect of radiation on the performance of the most common visible and near infrared emitting GaAs- and InPbased diode lasers [1-5, and references herein]. Johnston and Miyahira [1] studied the effect of proton radiation on different types of low power commercial laser diodes with emission wavelengths between 660 and 1550 nm. They found a linear increase of the threshold current with proton fluence as well as a small reduction of the slope efficiency.

They interpreted the degradation as arising from an increased non-radiative recombination rate and observed more clearly the radiation effect when they measured the devices below threshold. Troupakia et al. [2] performed a detailed test plan for 808 nm high power laser bars including vibration test, proton and gamma irradiation. They concluded that the evaluated devices are robust enough to survive the vibration and radiation stresses of most space flight missions. However, as far as we know, the radiation effects on GaSbbased laser diodes have not been previously investigated. These devices, emitting in the middle infrared between 2 and 3 µm are of a great interest for spectroscopy applications.

The degradation of GaSb p-n junctions after irradiation has been analyzed in [6], in the frame of their application in multiplejunction solar cells. An increase of the non-radiative recombination after radiation was observed, and the degradation rates for GaSb and GaAs junctions were found to be similar in the order of magnitude.  In this work we present results on the radiation hardness of mid infrared emitting GaSb-based diode lasers for space applications.

The work has been performed in the framework of the European Space Agency (ESA) Invitation to Tender AO/1-5618/08/NL/CP), with the aim of evaluating the future use of these devices in on-board spectrometric applications. The general results of the evaluation were presented in [7].

The analyzed devices were 2100 nm emitting Distributed Feedback (DFB) GaSb-based laser diodes. The laser structures were grown on GaSb substrates by Molecular Beam Epitaxy (MBE). The active region consisted of several type I InGaAsSb quantum wells separated by AlGaAsSb barriers. The confinement and cladding layers were also different AlGaAsSb alloys. The  structures were processed into narrow ridge laser diodes, and the DFB structure was realized by depositing a metal grating on both sides of the ridge. More details on the epilayer structure and processing technology for similar devices can be found in [8, 9]. The laser chips were mounted onto heat-spreaders and fiber-packaged in hermetic butterfly mounts, including an
integrated thermo-electrical controller, monitor photodiode and a temperature sensing element. The laser output was coupled to a SMF-28 single mode fiber.

The Optical Power-Current (P-I) characteristics were measured out of the fiber using a Thorlab laser driver and a Hamamatsu InGaAs photodetector. The calibration of the optical power was performed using a Newport thermopile as power detector. The subthreshold Current-Voltage characteristics (I-V) were measured using a Keithley SMU- 237 source. The lasing  wavelength, as a function of current and temperature, was determined using a Bristol 721A wavelength meter. 20 devices were characterized and submitted to a detailed test plan [7], which in addition to radiation tests included mechanical, thermal cycles and lifetime tests. The most relevant electro-optical laser parameters are summarized in table I. It should be noted that the power delivered by the laser chip was much higher than the ex-fiber measured power due to the coupling losses, estimated to be  50%.

Three samples were exposed to a Total Ionization Dose (gamma radiation) up to 100 krad in four different steps at a dose of 550 rad/h using a cobalt-60 source in the facilities of Centro de Investigaciones Energéticas, Medioambientales y Tecnológicas (CIEMAT, Madrid, Spain). Three samples (one of them previously gamma irradiated) were exposed to Displacement Damage (DD) with proton radiation up to 2·1010 protons·cm-2 in three steps at 60 MeV and proton flux of 107 protons·cm-2s-1, in the facilities of the Catholic University of Louvain (UCL, Belgium). During the gamma-ray and proton irradation processes the sample temperature was 25 ºC and the devices were short circuited. The radiation conditions were selected  as representative for a typical LEO (low earth orbit) satellite in a three year mission. The P-I and wavelength characteristics were measured after each radiation step, while the subthreshold I-V characteristics were measured initially and at the end of the test plan for each device. Two non-irradiated samples were used as reference.

GaSb-based DFB laser diodes emitting in the 2.1 μm wavelength range and integrated in a Butterfly package with an output power of around 10mW were evaluated in terms of radiation hardness for applications in a space environment. Radiation related degradation was not observed up to 100 krad of gamma radiation and up to 2·1010 protons·cm-2 at 60 keV. The results indicate that mid-infrared lasers based on GaSb are suitable candidates for space applications. 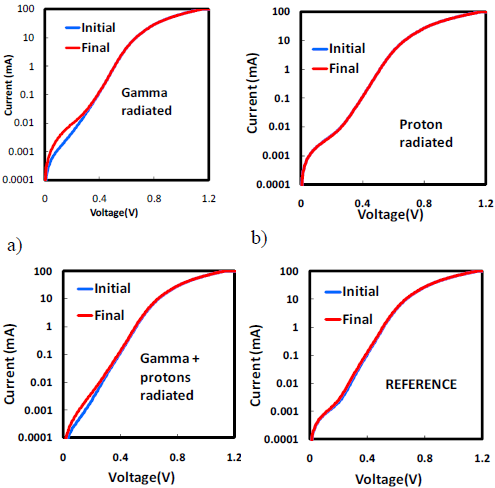