Dennis Zogbi, Paumanok Inc. in his TTI MarketEYE article discusses the subject of supercapacitors from a perspective of 25 years of behind-the-scenes consulting on markets, technologies and opportunities related to double-layer carbon and mixed metal oxide components, operating at the maximum available capacitance range.

The first time I saw a supercapacitor was in San Diego in 1995. I had just given a marketing speech on “Capacitors in Automotive Electronic Sub-Assemblies” at the Hyatt Hotel, and I was approached in the hotel lobby by a local manufacturer who showed me a prototype for a single-cell capacitor that operated in the farad range. Ironically, also within earshot was the inventor of the “hybrid supercapacitor,” which operated in the hundreds of thousands of microfarads, but at a higher voltage per cell.

This prompted a lively discussion about capacitance, available surface area, voltage per cell and potential end-market applications for a product with such high capacitance and low voltage. This conversation is memorable for me in my long career in dielectrics, as the technology, I saw in the foyer in 1995 was purchased by Tesla last year.

The term “supercapacitor” has become synonymous with electric double-layer carbon (EDLC) capacitors and similar high-energy storage devices, and loosely describes any capacitor that operates in the extremely high capacitance range, usually above 1 farad. We usually also include hybrid capacitors that operate in the hundreds of thousands of microfarads. Other industry names for similar high-energy storage devices include “ultracapacitor” and “pseudocapacitor.”

The supercapacitor represents an attractive value proposition for the design engineer because it can store a significantly higher energy level than conventional capacitors (on a similar size and weight basis), and can deliver that charge in either a rapid rate of time or in a slower, controlled rate of time. Thus, these devices are capacitors that can be used as short-term batteries, or for shaving peak power requirements in an electrical or electronic system. 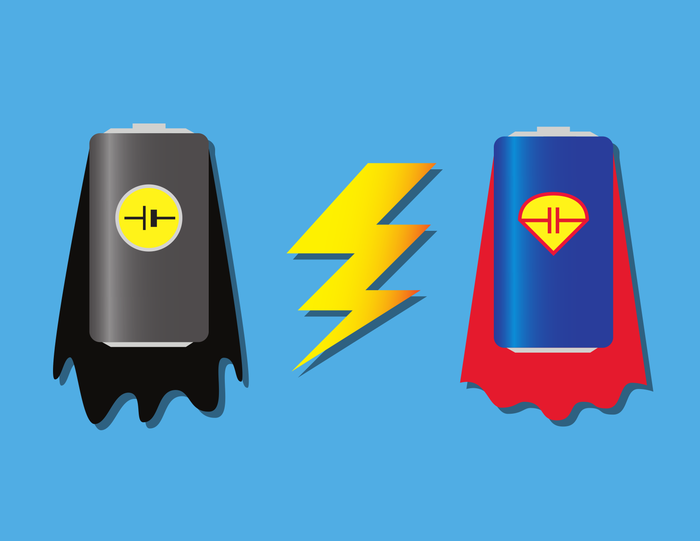 I have worked over the years with a variety of manufacturers of supercapacitors, carbon materials, electrolytes, separators and packagers in an attempt to quantify the market and qualify where this technology would find success.

A significant amount of effort has been placed on the concept of demand creation, whereby we assessed, based on the attributes of supercapacitors, were in the existing market, these products were best suited.

The high capacitance of a supercapacitor, under a controlled release, can:

In 1995, the majority of the existing market was for coin cell and cylindrical components in Japan, where they were utilized in the consumer audio and video imaging markets for battery backup of CMOS clock functions in video cassette recorders.

Activated carbon fiber materials have received the most attention in supercapacitor designs and are currently the dielectric material of choice in both low and high voltage circuit applications. The technology in its finished capacitor form is referred to as electric double layer carbon (EDLC).

Supercapacitors based upon carbon materials account for about 80 per cent of the worldwide revenues for all supercapacitors in 2020. Carbon materials are sold in either cloth or as a powder. Cloth materials have high activation levels and a certain degree of conductivity when purchased. Cloth also lends itself to the winding process.

Carbon powders are not as expensive as cloth and need to be applied to a substrate before packaging, thus adding to the production costs. However, it is generally agreed in the industry that powders are more cost-effective than cloths in producing supercapacitors, but the performance of the finished supercapacitor is not as good as that of the cloth, especially when shelf life exceeds ten years.

Carbon cloth materials are very expensive; they are either priced by the pound or by square meter. Average unit prices vary based upon carbon activation level and world region of production.

Another difference in price comes from the precursor material used in the carbon production process. Carbon feedstock materials can include various types of organic substances, such as peach pits and macadamia nuts. Synthetic carbon materials are also liberally employed in the industry and account for a large portion of the coin cell and cylindrically packaged products.

The activation level of the carbon fiber is important and should be in the 2,400 m2/g range (although it has been noted that 1,900 m2/g materials are acceptable).

Materials comprised of various mixed metal oxides are also employed in supercapacitor designs. The most prominent of these are ruthenium-based systems. Ruthenium particulates are combined with various materials, including polymer-ceramic separators and titanium. Another approach employs silver anodes with double-layer carbon cathodes or a mixed metal oxide approach employing vanadium nitride.

Hybrid supercapacitors have been created with tantalum slugs and ruthenium-based cathodes. This method raises the voltage per cell substantially, but the capacitance per cell is decreased.

What is the Value Proposition for Supercapacitors?

These supercapacitor attributes create a value proposition for the design engineer. Over the years we have compiled these attributes in an attempt to continually quantify and qualify the market as it developed globally.

Highest Capacitor Density of Any Capacitor – Supercapacitors do in fact provide the largest capacitance value of any capacitor. While other dielectrics measure their capacitance in picofarads (ceramics, DC film) and microfarads (ceramics, tantalum, aluminum), supercapacitors measure their capacitance in millions of microfarads, or in farads. In short, they hold a tremendous amount of charge which can be released rapidly like a capacitor (pulse discharge) or slowly, like a battery. The gap, or showstopper, lies in voltage per cell, which is limited to between 1 and 3 volts – with most of the 33 global manufacturers in 2020 producing 2.7-volt cells. Thus, to achieve a meaningful working voltage, supercapacitor cells must be linked together. This ultimately affects the volumetric efficiency of the finished capacitor module.

Lowest Cost Per Farad – This is another selling point of supercapacitors.  It is true that when a capacitor exceeds 1 farad that double-layer carbon capacitors offer the best price out of all the primary dielectrics. However, in the real world, we seldom see alternative dielectrics being sold beyond 1 farad. Thus it is difficult to make a comparison between supercapacitors and other dielectrics. Rather, it is better to say that if a customer needed a capacitive discharge of 1 farad or higher, and approached an aluminum electrolytic capacitor manufacturer, the job would be custom and more expensive than a double-layer carbon supercapacitor.

Supercapacitors operating at capacitance values greater than 1 farad must largely create their own market, except in instances where very high capacitance aluminum electrolytic capacitors are used in series, such as the capacitors employed in output filters for industrial power supplies. This further suggests that the future supercapacitor market is more likely to augment batteries by replacing the “heavy load” function of the battery.

Wide Operating Temperature – Although “capacitance change with temperature” may differ between the manufacturer and by supercapacitor technology, generally speaking, supercapacitors operate superbly in very cold and very warm environments when compared to lead-acid batteries. This makes them more desirable for engine cranking applications in harsh automotive, military and industrial environments.

Reliable, Long Life – Supercapacitors are extremely reliable. This is an excellent selling point when supercapacitors are used to replace total or partial functions of a battery.  Batteries have short shelf lives and must be replaced frequently. Supercapacitors do not readily degrade and therefore do not need to be replaced. This significantly limits expenditures on maintenance, which tend to be quite costly depending on the environment in which the battery is located. Therefore a good marketing tactic has been to concentrate on battery markets where maintenance costs are high.

(This also lends credence to the increased interest from the scientific community in supercapacitors as a replacement for batteries in remote sensing and testing operations. Battery maintenance is, in fact, the most expensive portion of the continued operation of remote scientific sites because of the cost for a maintenance team to gain access.  Maintenance-free supercapacitors have made inroads into the remote scientific test and measurement equipment markets worldwide.)

Safe Operation – Supercapacitors operate more safely than batteries, which have been known to fail catastrophically and to leak toxic chemicals into the environment. As a result, battery disposal is also inherently expensive. Supercapacitors would eliminate the disposal cost and would be safer to handle than lead-acid and other types of batteries.

Market Attractiveness: On the Cusp of Two Markets

Battery Augmentation Markets – The lead-acid battery market is accessible by supercapacitors primarily as an augmentation of that market for the development of supercapacitor-assisted batteries, wherein the supercapacitor is used as a load-levelling device to absorb the peak power requirements of the total system. These applications will continue to develop in engine cranking circuits and UPS equipment worldwide. Also, supercapacitors are touted as a power-assist or load-levelling device for applications in electric vehicles, where banks of a nickel-metal hydride or lithium-ion batteries work in conjunction with double-layer carbon supercapacitors for power assist in going up hills or recouping the energy from braking.

Battery Displacement – It has been noted that coin cell double-layer carbon supercapacitors are being used to displace lithium-ion batteries for clock function applications in consumer electronics, such as video players, televisions and home stereo equipment. In these instances, the supercapacitor acts like a battery and discharges at a slow rate to ensure the continued clock functions of the consumer device during a power outage. This is by far the largest market worldwide right now for supercapacitors. The displacement of the lithium-ion battery by a supercapacitor is the result of comparable (if not lower) pricing and longer comparable life cycles.

Conventional Capacitor Displacement: Aluminum Electrolytic Capacitors – Higher capacitance aluminum electrolytic capacitors with capacitance ranges in the hundreds of thousands of microfarads are used in industrial power supplies, transportation signal strobes (which also use some OPP film and PET film/paper dielectric capacitors), audio amp base line stiffeners and motor start capacitors. Some viable opportunities for replacement of aluminum electrolytic capacitors with conventional supercapacitors include motor start and base line stiffener applications, where these supercapacitors have already made inroads.

Industrial Electronics – Industrial applications for supercapacitors will generally be in the 12.5 to the 300-volt range with a capacitance requirement of between 1 and 205 farads:

Automotive Electronics – The following is a list of applications for supercapacitors in the  automotive industry that we have noted, and include an actuator, electric power steering, gasoline engine start, and electric vehicle:

There are some general gaps in the supercapacitor technology as it exists today, mainly including:

In surveys of potential end-users, common concerns center on linking multiple cells to achieve higher voltages. In doing so, there is also an increase in production costs and a general consideration among end-users to keep the costs of their devices low. Potential end-users are also concerned about the reliability of a product that must link multiple cells to achieve higher voltages, as well as the engineering challenges behind successfully linking cells.

Still, most applications for conventional capacitors are generally found in the 16, 25, 35 and 50+ volt ranges; therefore, the single-cell limitations of supercapacitors, which are between 2 and 3 volts per cell, require multiple cells linking to approach existing capacitor markets.

There are also concerns about the time constant of discharge, which may be too slow for certain pulse applications. (However, developments in organic semiconductors such as polypyrrole and isoquinolinium may prove useful to lower the equivalent series resistance of supercapacitors.) Moreover, carbon-based supercapacitors have been seen to display a sharp decrease in capacitance with an increase in frequency, which would limit their application in a low pass filter for wireless communications.

All companies involved in the manufacture of supercapacitors agree that raw material costs must come down for them to lower prices and expand their markets. The increased volume in raw material purchases, especially for activated carbon fiber fabric, will inevitably bring down the price.