The Japan Aerospace Exploration Agency (JAXA) presented the ASTRO-H satellite to the media at the Tanegashima Space Center, situated on a small island in the south of Japan. The satellite was developed by institutions in Japan, the US, Canada and Europe.

The science goals of this mission include studying the dynamics of hot gas in galaxy clusters, the accretion of matter onto supermassive black holes at the cores of distant galaxies, and the acceleration of cosmic-ray particles up to very high energies.

Many objects in deep space — including black holes, neutron stars, and galaxy clusters — emit X-rays as well as visible light; however, those X-rays have wavelengths that are 1,000 to 100,000 times shorter than visible light. The best way to study X-rays from deep space is to use an orbiting telescope, because Earth’s atmosphere blocks X-rays from reaching land-based telescopes. 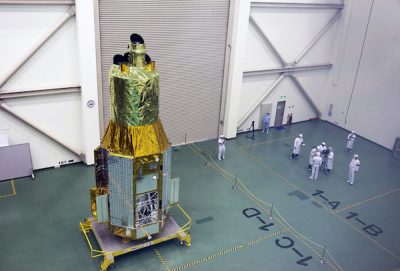 The ASTRO-H satellite on 27 November 2015 at the Tsukuba Space Center, Japan. Credit: JAXA

The principal investigator for ASTRO-H is Tadayuki Takahashi, of JAXA and the University of Tokyo. The lead investigators for the United States are at NASA’s Goddard Space Flight Center.

ESA’s contribution consists in funding the procurement of a number of items on the various instruments, three European scientists who will serve as advisors to the mission’s core science programme, and one full-time scientist based at the Institute of Space and Astronautical Science (ISAS)/JAXA, Japan, to support in-flight calibration, science software testing and data analysis. Support to European users will be provided by scientists at ESA’s European Space Astronomy Centre in Madrid, Spain, and at the European Science Support Centre at the ISDC Data Centre for Astrophysics, University of Geneva, Switzerland.

ASTRO-H was released on Wednesday, February 17, 2016. ASTRO-H is the eighth JAXA satellite dedicated to astronomy and astrophysics. As with other JAXA missions, it will be renamed after its launch.

Alter Technology participated in the procurement and testing of the EEE parts to build the satellite.3