Quantum communications offer many advantages for secure data transmissions, such as confidentiality, integrity and spy detectability. Quantum physics allows the encoding of information using the correlation between two or more particles (photons, atoms) thanks to quantum cryptography or Quantum Key Distribution (QKD), a method of processing information arising from the properties of quantum entanglement.

The losses of the fiber optic link and the current state of the photon detection technology make the maximum length of the section without using regeneration (amplification) of approximately 100 km, while for the free space transmission the limit is the visible horizon. Such problems are in principle almost absent in space and are less severe in earth-to-space bonds. In fact, quantum links in free space combined with fiber optics could extend secure communication between points on the earth worldwide.

ALTER participated in the development and characterization of a photonic transceiver for space communication/encryption (1). Specifically, contributed in the characterization of the EPS planned to be used for transmitting from a LEO satellite to two separate ground stations either one common secure key simultaneously or two different secure keys consecutively. Alter Technology also performed the radiation tests, total ionizing dose (TID) and displacement damage (DD) test, on blue/violet and near-infrared (NIR) LEDs for space quantum communication (2).

Nowadays Alter Technology UK (formerly Optocap) is participating in the QUEST project of Glasgow’s Fraunhofer Centre of Applied Photonics (FCAP), which uses satellite technology to research QKD over long distances. The target of this feasibility study is the evaluation of the potential of entangled photon source for space quantum key distribution QKD. 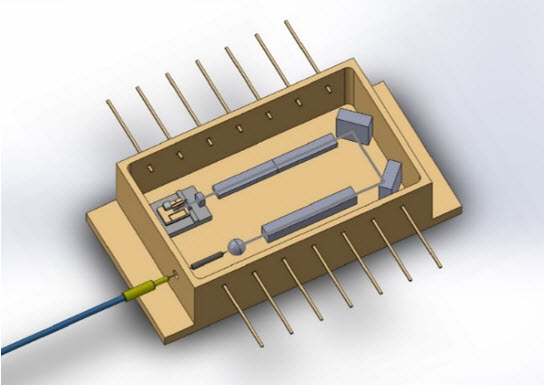 David Poudereux Sánchez
Optoelectronics and New Technologies department at Alter Technology
He has a degree in physics from the Universidad Complutense de Madrid and PhD in the telecommunications school of the Universidad Politécnica de Madrid in the field of photonic crystal fibres. Since 2016 he works at ALTER TECHNOLOGY in the department of Optoelectronics and New Technologies.