SRS Shock Testing is intended to reproduce the sudden shock that the satellite experiences when deployed from the launcher. This test consists of placing the EUT on a table and shocking the table with a hammer or projectile. This test is normally applied just to non-qualified designs.  SRS is not a complex test, but it is tricky and requires a lot of experience from the operator.

When executing an SRS test, the main problem is preparing the setup (table, hammer, and EUT) to produce the desired acceleration profile in the EUT. Since the shock profile is not easily predictable by modeling, experience is key. Therefore, an empirical setup is needed with a dummy mass. The iterative adjustment of the test parameters is needed to ensure that the shock produces the desired acceleration profile and is reproducible. A critical parameter of these tests is:

The SRS test results are the measurement of a broad spectrum (100 to 10,000Hz) to which the smallsat has been submitted. Normally, each shock is repeated 3 times on each axis. The piece of equipment is subsequently inspected for cracks or displacements. -In addition, low-level sine surveys can be performed to compare the position of the eigenmodes before and after the shocks. Functional tests can be performed too to assess any damage in the electronics.

The launcher defines the test level (acceleration profile) because he knows how the deployment of the satellite is performed. 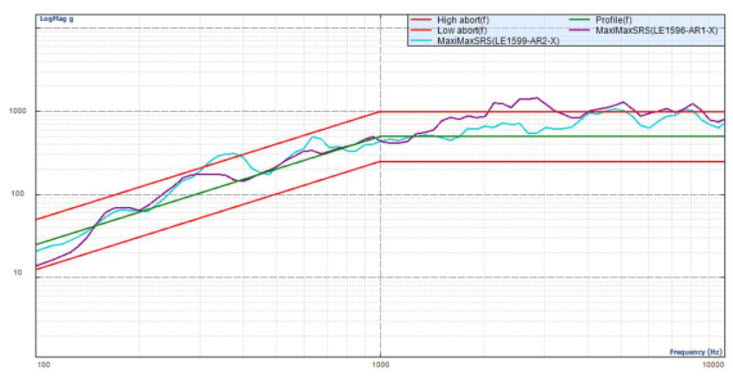 Shock Response Spectrum (SRS) tests do not require cleanliness because they are performed on structural models.

Get in touch today!