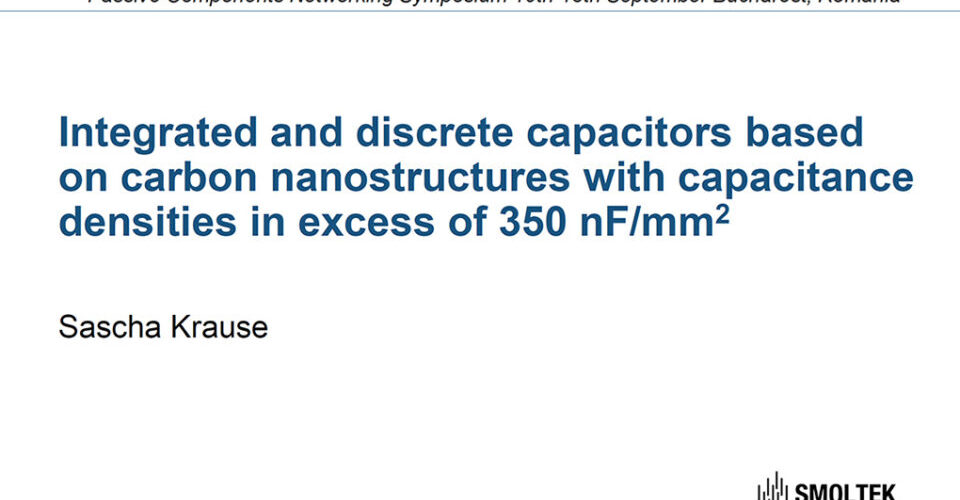 Integrated and Discrete Capacitors Based on Carbon Nanostructures

Complete on-chip fully solid-state 3D integrated capacitors using vertically aligned carbon nanofibers as electrodes to provide a large 3D surface in a MIM configuration have been manufactured and characterized. The capacitance per device footprint area has been studied, as well as its behavior at different temperatures and frequencies. Equivalent series resistance (ESR), breakdown voltage and leakage current have also been measured. The entire manufacturing process of the capacitors is completely CMOS compatible, and in combination with the low device profile of about 4 µm this makes the devices readily available for integration on a CMOS-chip, in 3D stacking, or redistribution layers in a 2.5D interposer technology. Capacitances of ca 350 nF/mm2, ESR of about 100 mΩ, breakdown voltages of up to 25 V and leakage currents in the order of 0.004 nA/nF have been measured.

The rise of the Internet of Things (IoT) and the constant demand for miniaturization, increased performance, and more functionality in a single package is constantly pushing the need for integrating more devices onto a single chip. In recent years, the downscaling of components following Moore’s law [1] has not necessarily resulted in a better performance to cost ratio, thus requiring innovation in other areas such as component and system integration. One such example is 3D and 2.5D [2] packaging technologies. Thus, there is a raising need for on-chip or in-package, capacitors to be used not only in traditional integrated circuits but also for integrated components on interposers.

For this purpose, high energy density capacitors have been developed to serve diverse functions in ICs and integrated systems, such as decoupling or RF filtering. Decoupling capacitors act as a charge reservoir and are used to reduce rippling of the supplied power to an IC during spikes of high power demand [3]. However, in order to operate optimally, decoupling capacitors must be placed within a critical distance to both the current load and the power supply, to be effective [4]. Therefore, decoupling capacitors tend to strive for being integrated directly on a CMOS chip for best operation. Further, with the surge of the 2.5D interposer technology featuring embedded components, RF filtering is becoming a very important function requiring capacitors.

For integration, a fully solid-state device is needed, with the parallel plate capacitor being the simplest example. To avoid consuming precious space on the chip surface, clever methods need to be implemented to increase the surface area of the electrode without increasing the footprint area of the device. IPDiA, now Murata, has previously used a method where deep trenches are etched into the Si substrate and atomic layer deposition (ALD) or low-pressure chemical vapour deposition (LPCVD) is used to deposit materials to generate a 3D structure with the high surface area. Using this approach with 100 µm deep trenches they achieved capacitances of over 500 nF/mm2 [5]. The disadvantage of this method is that it is time-consuming and expensive, and the deep trenches will weaken the substrate making it more fragile.

Previous studies have investigated the feasibility of using vertically aligned carbon nanofibers (VACNFs) to enhance the surface area of the electrode of a capacitor, by growing them on a substrate and then depositing Al2O3, HfO2 and ZnO by means of ALD. It was shown that the CNFs were conformally coated [6] and even operating devices with capacitance densities of up to ca 200 nF/mm2 have been demonstrated [7] – [9].

In the present work, we present the fabrication and characterization of fully CMOS compatible capacitors based on VACNFs and ALD deposited dielectrics. Two specific standard dielectric materials, Al2O3 and HfO2, of different thicknesses and in different combinations have been investigated. As a result, truly solid-state, 3D integrable, on-chip capacitors based on CNFs as electrode material [8] – [9] have been manufactured and characterized. The capacitors show specific capacitance in excess of 300 nF/mm2 (per device footprint area), low equivalent series resistance of about 100 mΩ with overall profile height lower than 4 microns, and breakdown voltages up to 25 V. Further, leakage currents of the order of 0.004 nA/nF have been measured which supersedes the leakage current performance of standard polymer-based capacitors used for decoupling purposes.

The fabrication process of the solid-state capacitors is shown schematically in Fig. 1. The bottom electrode of the capacitor is first fabricated via standard metal deposition and patterning, Fig. 1a. Electron beam lithography is then used to pattern and then deposit a matrix of catalyst dots. Vertically aligned carbon nanofibers (VACNFs) are then grown directly on the bottom electrode selectively on the catalyst in a DC-PECVD system at 390 °C Fig. 1b. Further details regarding the growth can be found in [10]. The resulting CNF length is 2-3 µm.

By means of atomic layer deposition (ALD), the devices are then coated with a dielectric layer, conformally coating the CNFs as well as the rest of the bottom electrode, Fig. 1c. Different combinations of HfO2 and Al2O3 are used as the dielectric materials in the resulting capacitors, both as pure materials and different stacks of Al2O3/HfO2/Al2O3. Thermal ALD at 250 °C is used for the dielectric depositions.

After the dielectric deposition the top electrode is formed, Fig. 1d. Plasma enhanced ALD at 250 °C is first used to deposit a layer of TiN to ensure fully contacting the sidewalls of the CNFs. A deeper discussion of the effect of TiN deposited via ALD is available in [8]. The bulk of the electrode is then deposited through sputtering. Finally, the dielectric material is opened to allow for probing, Fig. 1 d.

The physical properties of the CNFs after growth are characterized using scanning electron microscopy (SEM), and for the electrical characterization of the capacitors a low frequency vector network analyzer (VNA) is used to do one port S-parameter measurements ranging from 10 Hz to 3 GHz.

The dielectric properties such as breakdown voltage and leakage current are measured using a Keithley 4200SCS Parameter Analyzer.

The CNF growth is shown in Fig. 3. The fibers are clearly grown separated from each other and vertically aligned. The fiber length is only 2 – 3 µm, meaning that the total height profile of the complete device is ca 4 µm. This makes the capacitors readily available for integration onto a CMOS chip or in 3D stacking. Fig. 4 shows the CNFs after the dielectric coating via ALD, the image showing a coating of Al2O3/HfO2/Al2O3 (5/3/5 nm). The dielectric layer is uniformly covering the individual CNFs. 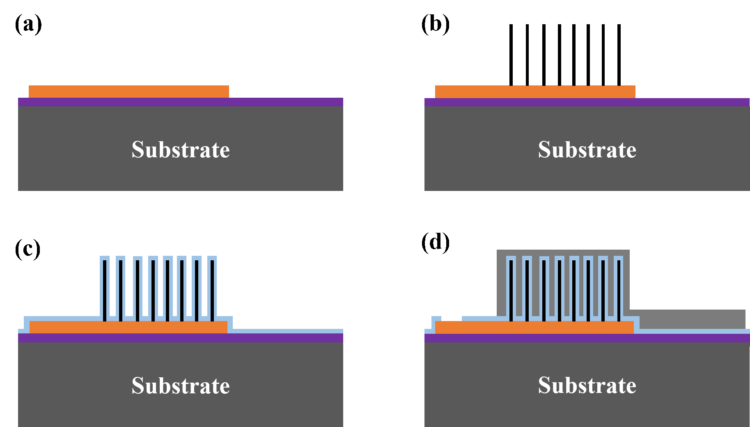 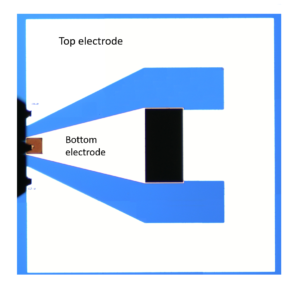 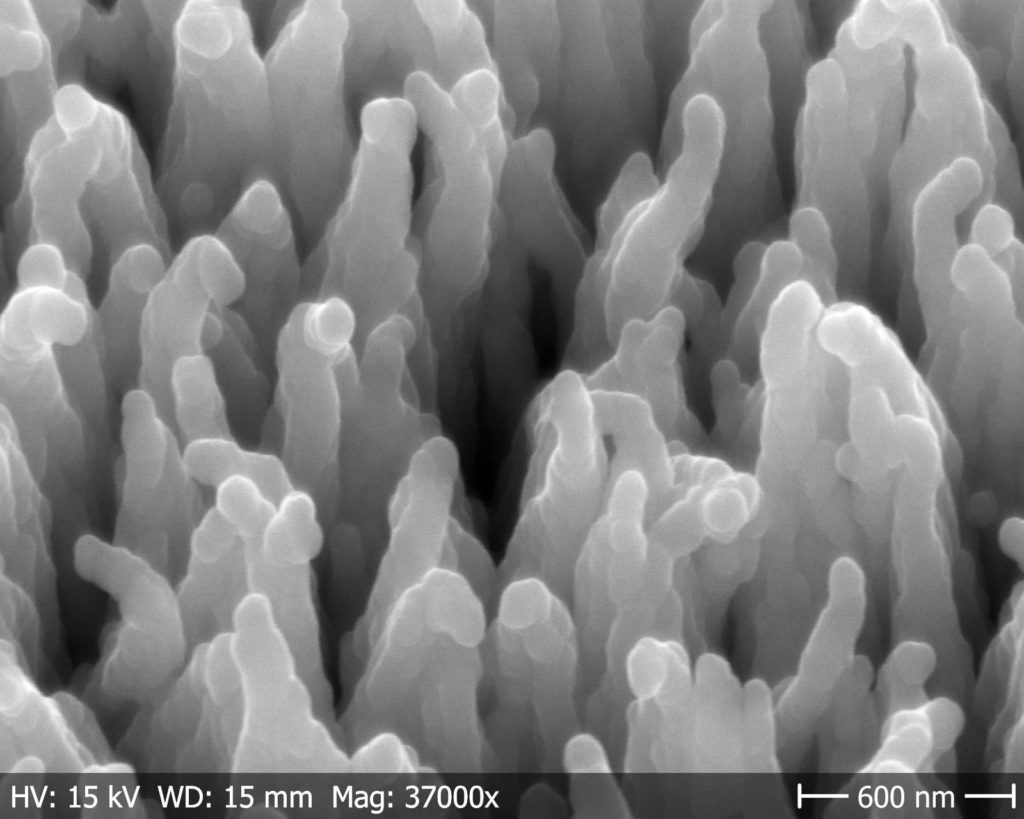 The capacitance behavior at different temperatures was also studied. By using a heated sample holder, measurements were taken at 25 °C, 55 °C, 90 °C, 125 °C, and 150 °C. The change in capacitance density is seen in Fig. 6. Cycling the temperature also showed that the temperature behaviour of the capacitors was reversible

The capacitance behaviour at different frequencies was also investigated by studying the impedance of the devices in the frequency range where the inductive contribution to the impedance can be considered negligible. A plot of the result from one device with 15 nm HfO2 as a dielectric is seen in Fig. 7. 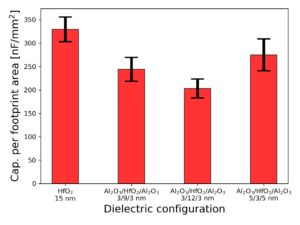 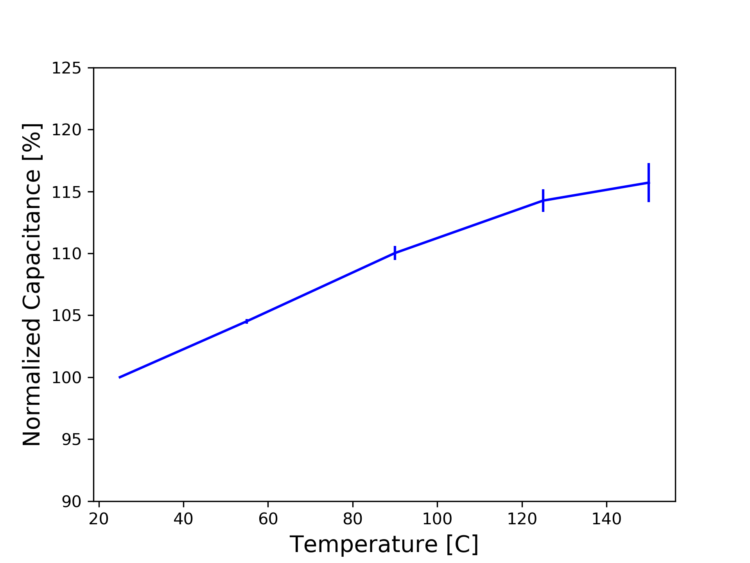 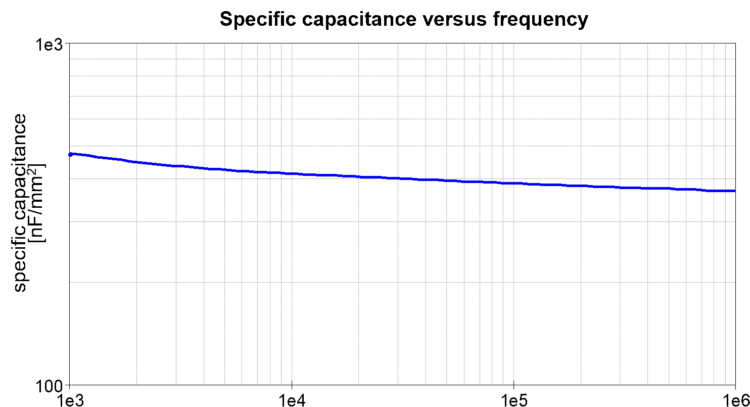 Figure 7: The frequency behavior of the capacitance of a 15 nm HfO2 device

To further investigate the capacitors, measurements of their leakage current were performed at 1 V and at 2 V. The devices were biased for one minute before the leakage current was recorded to avoid transients. The resulting numbers are shown in Table 3, and with a leakage current to capacitance ratio of 0.004 nA/nF, the CNF-based capacitors supersede the performance of polymer capacitors, proving their usefulness.

Typically, integrated large capacitance density devices often present relatively large equivalent series resistance (ESR), compared to their discrete counterparts. In this work, the devices needed to be de-embedded to characterize the ESR, since the measurements will contain parasitic impedances that are not inherent to the capacitor itself, but to the metal structure related to probing. To remove this part of the measured data, de-embedding devices were manufactured without any CNFs or dielectric material, i.e. the top and bottom electrodes form a short circuit. These devices are then measured the same way as the CNF-MIM capacitor, and the resulting impedance is subtracted from the measured impedance of the CNF capacitor. 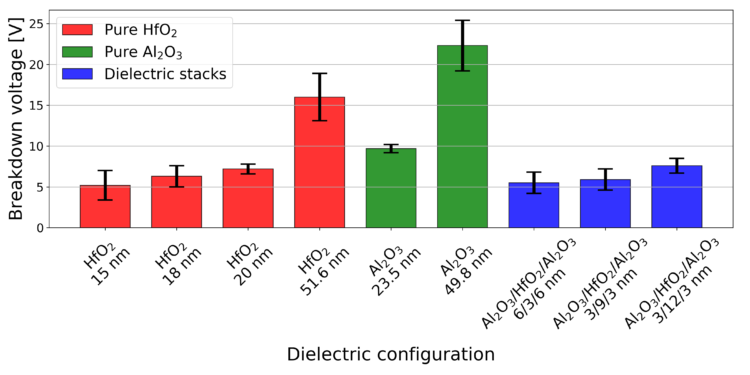 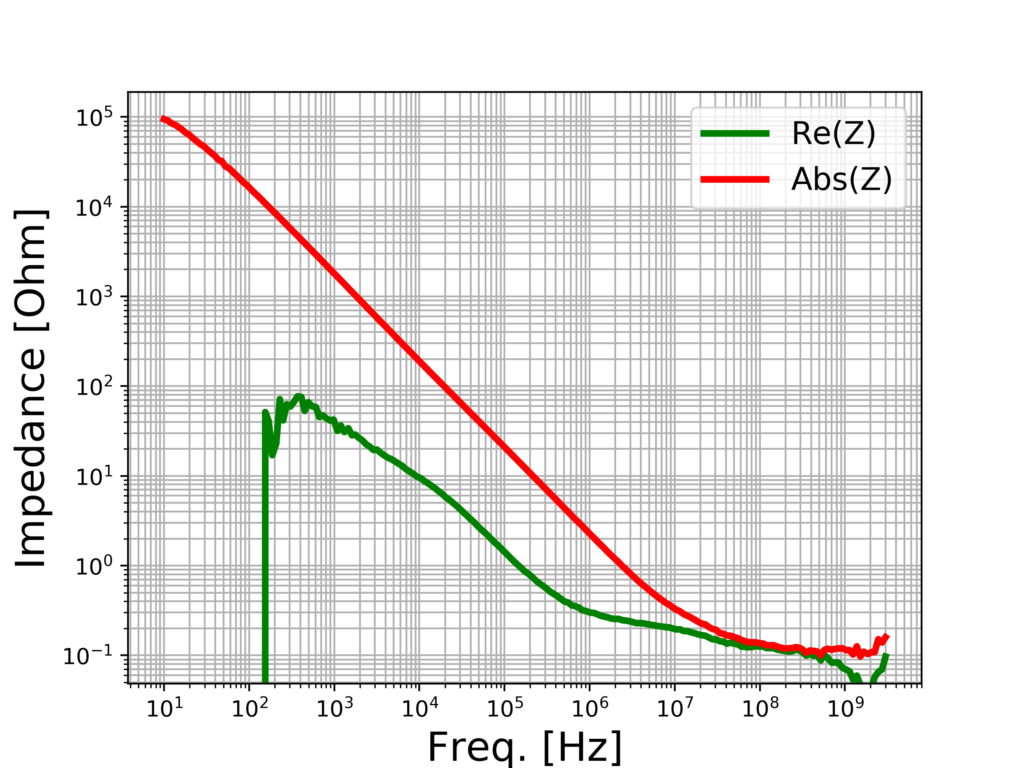 Figure 9 right: Plot of the impedance for the CNF-MIM capacitor after de-embedding.

Complete on-chip fully solid-state 3D integrated capacitors using VACNFs as electrodes to provide a large 3D surface in a MIM configuration have been manufactured and characterized. The capacitance per device footprint area has been investigated for different dielectric materials, as well as at different temperatures and at different frequencies. Furthermore, the equivalent series resistance (ESR), breakdown voltage and leakage current has been measured. A capacitance density of ca 329 nF/mm2 has been realized from devices with 15 nm of HfO2 as dielectric material. Through de-embedding, the ESR of the devices was found to be around 100 mΩ. The breakdown voltage was measured ranging up to 25 V and followed the expected trends when varying the dielectric thickness and combinations of dielectric materials. DC leakage current was measured, with a leakage current to capacitance ratio of 0.004 nA/nF, superseding the performance of current polymer capacitors.

The entire manufacturing process of the capacitors is completely CMOS compatible, which along with the low device profile of about 4 µm makes the devices readily available for integration on a CMOS-chip, in 3D stacking, or redistribution layers in a 2.5D interposer technology.

The paper is available for download in pdf
More conference technical papers on passive components can be viewed on EPCI e-symposium webpage here.

How to measure MLCC Capacitance accurately on LCR meters