Coaxial fibre-shaped supercapacitors with short charge carrier diffusion paths are highly desirable as high-performance energy storage devices for wearable electronics. However, the traditional approaches based on the multistep fabrication processes for constructing the fibre-shaped energy device still encounter persistent restrictions in fabrication procedure, scalability, and mechanical durability. To overcome this critical challenge, a team of scientists based in China, the U.S. and Singapore realized an all-in-one coaxial fibre-shaped asymmetric supercapacitor (FASC) device by a direct coherent multi-ink writing three-dimensional printing technology via designing the internal structure of the coaxial needles and regulating the rheological property and the feed rates of the multi-ink.

Benefitting from the compact coaxial structure, the FASC device delivers a superior areal energy/power density at a high mass loading and outstanding mechanical stability. As a conceptual exhibition for system integration, the FASC device is integrated with mechanical units and pressure sensor to realize high-performance self-powered mechanical devices and monitoring systems, respectively. 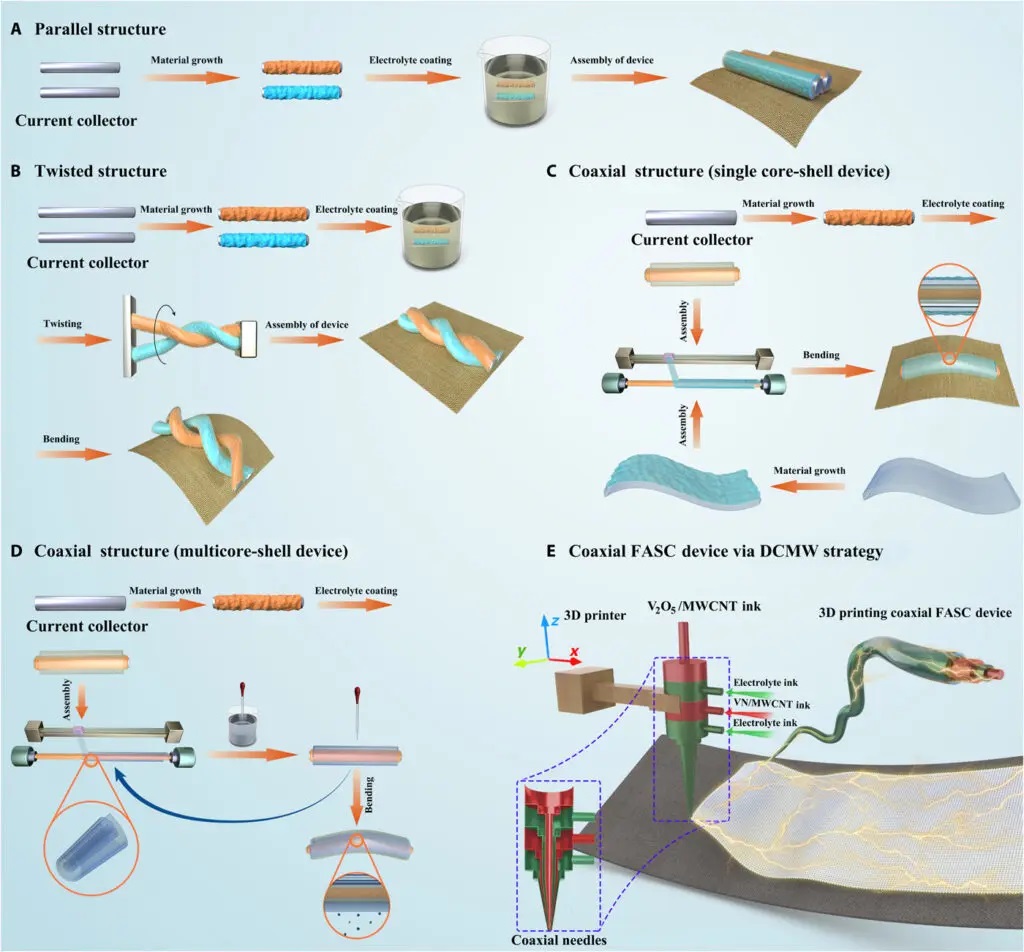 Fig. 1 Diagrammatic drawing of the fabrication process of various FASC devices.Schematic diagram of the comparison of the preparation process of the conventional FASC device with (A) parallel, (B) twisted, (C and D) coaxial architectures, and (E) our development of three-dimensional (3D) printing coaxial FASC device via a direct coherent multi-ink writing (DCMW) technology.

However, they are not ideal for electron transfer and ion diffusion because of their larger spacing between two electrodes. Additionally, they have a massive volume structure, posing a serious challenge for the large-scale integration process. Although FASC with shorter charge carrier paths can improve device performance, they suffer from the separation of negative/positive electrodes when a device is bent.

To overcome the above challenges, a team of scientists based in China, the U.S. and Singapore has developed an all-in-one coaxial FASC device with compact internal structures using 3D printing direct ink writing technology. The asymmetric supercapacitors were obtained using different electrode inks/electrolytes since the traditional direct ink writing technology is based on single-ink printing, which can only write one electrode at one time.

Impressively, the device exhibited great flexibility with capacitance retention of 95.5 per cent after 5000 cycles of repetitive bending, which is better than traditional coaxial (87.1 per cent) or twisted (78.2 per cent) asymmetric supercapacitors.

People usually monitor their health status using sensors, which need to be charged or replaced frequently. Therefore, the self-energy monitoring system can solve the aforementioned problem. To investigate the sensing capability of the pressure sensor, the pressure sensor was attached to the wrist and fingertip of an adult tester and the response signals were detected before and after exercise. The results depicted that both the big and small signals can be monitored, indicating excellent pressure-sensing performance. Thus, an all-in-one coaxial solid-state FASC device with high energy density will become a prospective candidate to be used in more new fields such as artificial intelligence, robotics and sensing.