The automotive electronics industry has responded to automotive application challenges by defining a component stress-test standard for passive components known as AEC-Q200. It includes a set of tests, some drawn from other standards bodies, which a device must pass for it to be qualified to AEC-Q200. What is this about?

Cars used to be little more than four wheels, four seats, an internal combustion engine, and enough electronics to get a spark to each plug at the right time. Today’s vehicles are radically more complex and are evolving rapidly as internal combustion gives way to electric drivetrains, and manual controls give way to increasing levels of vehicle autonomy. The choice of components that make up a modern vehicle’s electronics, even down to the seemingly simple passives, is, therefore, becoming as important as the choice of engine configuration or carburetion strategy was when cars were so much simpler.

Consider the challenges that automotive components face. They must offer very high reliability so that they work correctly for a vehicle’s multiyear lifetime, rather than the months that some consumer equipment (earbuds, anyone?) seems to have been specified to last. Automotive components have to work across extreme temperature ranges, from polar winters to desert summers. And they have to do all this while surviving mechanical shocks and complex vibrations; frequent thermal cycling; electrical, electrostatic and electromagnetic interference; constant exposure to moisture, humidity and solvents; and possible mechanical stresses due to flexing PCBs.

The automotive electronics industry has responded to this laundry list of challenges by defining a component stress-test standard for passive components known as AEC-Q200. It includes a set of tests, some drawn from other standards bodies, which a device must pass for it to be qualified to AEC-Q200. The standard covers all the issues mentioned above, as well as production issues such as solderability and resistance to soldering heat. Although AEC-Q200 appears comprehensive, some manufacturers apply further statistical tests to their manufacturing lots in order to be able to claim greater levels of component reliability.

The automotive industry is going to need these enhanced levels of reliability as vehicles continue to evolve. For example, some manufacturers are introducing 48V vehicle power supplies to augment or replace today’s 12V systems. These higher-voltage supplies are being used to drive motors and turbochargers, to power subsystems such as the steering, brakes, water pumps, radiator cooling, and air conditioning – and to supply the increasing amounts of vehicle control electronics and infotainment systems onboard today’s cars.

The shift to 48V systems will see large currents flowing around vehicles’ wiring looms. This will challenge automotive electronics designers to specify components, especially passives, that can sustain a combination of relatively high voltages, high currents, and high operating temperatures while delivering the needed long-term reliability. In some cases, these component choices may have relatively profound consequences. For example, designers may need to use much thicker PCB traces to dissipate heat from surface-mounted components that are carrying higher currents. If they can’t find such surface-mounted components to support these currents, designers may have to move to radial components – and face an attendant return to wave soldering for PCB assembly. 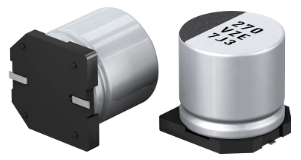 Manufacturers such as Panasonic are developing parts to mitigate this issue. Its EEH-ZE series hybrid aluminum electrolytic capacitors (above) have been designed for use in filtering the inputs and outputs of power converters and voltage regulators, for power and battery decoupling, and in a variety of automotive applications. The parts are surface-mountable and comply with AEC-Q200. They are designed to operate at ultra-high temperatures, with a thermal endurance of 2,000 hours at 145°C. The parts offer nominal capacitances from 33 to 330µF, at voltages from 25 to 63V DC. They also feature an operating temperature range of –55 to 145°C, low equivalent series resistance, and can sustain high ripple currents.

The shift to e-mobility is also creating demand for new forms of passives. For example, TDK has created a range of CeraLink capacitors in low-profile packages (right), which can act as ripple-current suppressors, DC link capacitors, and snubbers. The parts have been designed for use in fast-switching automotive power supplies and inverters, made possible by the availability of new IGBTs and MOSFETs, where low equivalent series resistances and inductances are important. The parts’ compact size will also make them a good fit for use in power modules. They are qualified to AEC-Q200. 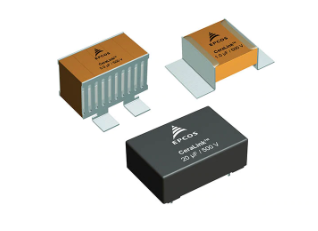 Nichicon offers UBY aluminum electrolytic capacitors (left), for use in electric power steering and direct-injection engine drive systems. The parts offer higher capacitances and withstand much higher ripple currents compared to other electrolytic capacitors. The UBY parts are available with capacitances from 160 to 12,000μF, at operating voltages from 25 to 100V, and with a rated temperature range from –40 to +135°C. 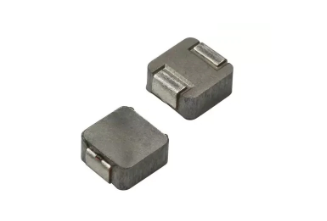 Power circuitry needs more than just capacitors to function. Vishay produces its IHLP range of surface-mountable power inductors (left) for the automotive industry. The parts are robust because they are made by forming a copper coil onto a lead frame and then encapsulating it in powdered iron and epoxy. The inductors can withstand operating temperatures of 180°C, have low DC resistance and core loss, are self-shielding, and are smaller and lighter than alternatives. The IHLP parts meet AEC-Q200, but Vishay applies further tests to ensure higher levels of reliability for the automotive market.

Modern cars aren’t just about power electronics. As electric motors and actuators proliferate in our vehicles, so too do the signals and control systems that tell them what to do. Successful automotive systems design, therefore, demands that we find ways to protect very small digital control and data signals in increasingly noisy electrical environments.

Bourns is addressing this issue with its CDSOT23-T24CAN-Q protection circuit (below) for the widely used CANbus vehicle-networking scheme. The part includes a dual transient-voltage-suppression diode array to provide surge protection that meets the IEC 61000-4-5 standard and electrostatic discharge protection that meets the requirements of IEC 61000-4-2. Expect to see much more of this kind of signal-protection circuitry being used in car designs as data rates rise and we move from CANbus to automotive Ethernet vehicle networking. If you’re already working on a related design, make sure you request a Bourns CANbus demo board and test the component for yourself. 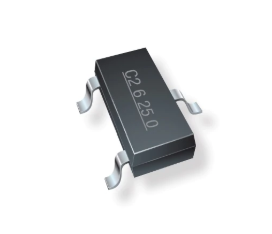 As cars become more complex, their functions are increasingly going to be handled by electrical devices driven by power electronics and controlled by digital signals. Automotive systems designers will have to ensure that the two can coexist successfully, as well as meeting the stringent thermal, reliability and longevity requirements of modern vehicles. Choosing components created specifically for automotive use will ensure that the power and control systems of future vehicles are built on firm foundations.