Cracking remains the major reason of failures in multilayer ceramic capacitors (MLCCs) used in in space electronics. Due to a tight quality control of space-grade components, the probability that as manufactured capacitors have cracks is relatively low, and cracking is often occurs during assembly, handling and the following testing of the systems.

Majority of capacitors with cracks are revealed during the integration and testing period, but although extremely rarely, defective parts remain undetected and result in failures during the mission. This situation is aggravated by manual soldering and rework that are often used during low volume production of circuit boards for space.

Although failures of MLCCs are often attributed to the post-manufacturing stresses, in many cases they are due to a combination of certain deviations in the manufacturing processes that result in hidden defects in the parts and excessive stresses during assembly and use. This report gives an overview of design, manufacturing and testing processes of MLCCs focusing on elements related to cracking problems.

The existing and new screening and qualification procedures and techniques are briefly described and assessed by their effectiveness in revealing cracks. The capability of different test methods to simulate stresses resulting in cracking, mechanisms of failures in capacitors with cracks, and possible methods of selecting the most robust to manual soldering stresses capacitors are discussed. 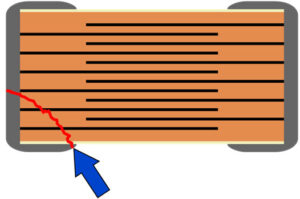 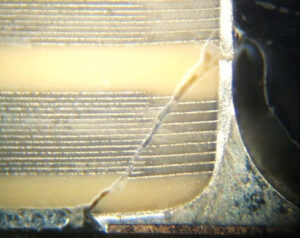 Millions of high-reliability ceramic and space capacitors are catalogued In doEEEt with the full ordering info, applicable specifications and main parameters.
Choose the right capacitor for your application just clicking in the CAPACITORS category.