Advances in multilayer ceramic capacitor (MLCC) manufacturing have led to significant improvements in the voltage and capacitance capabilities of miniature case size capacitors. These advances have extended to ceramic discoidal capacitors, which are employed in most bulkhead-mounted EMI suppression filters. They are now available in smaller packages and make the control of EMI in space- and weight-constrained aerospace applications easier and more reliable.

Currently, discoidal capacitors can be manufactured with outer diameters as small as 0.050” with as much as 5,000pF of capacitance. They also have equivalent models, which helps ensure effective insertion loss in the range of 10GHz and beyond. With proper filter design and usage, miniature discoidal capacitors can achieve high-performance bulkhead filters that deliver space and weight savings, both of which are critical in aerospace applications including drone countermeasure equipment, which uses EMI of a certain strength and spectrum width to render a flight platform inoperable or allow it to be taken over by another entity.

EMI control is a critical design concern in aerospace systems. Designs that lack EMI protection run the risk of totally or partially losing their ability to communicate with and control the end system. In satellite systems, for example, EMI threats can come from natural (e.g., ionospheric) or engineered sources, intentional or otherwise, which can vary in terms of source, location, magnitude, and duration.

End systems are evolving at a rapid pace to satisfy steady market demand for increasingly complex electronic content capable of performing at faster speeds within smaller packages powered by lower voltages. CubeSats offer an excellent example. Technology that was first proven in larger satellites underwent several processes, material, and design iterations to better satisfy the size, weight, and power (SWaP) requirements, and as the knowledge and process database expanded, the rate and magnitude of change further increased, resulting in miniature satellites well suited for low Earth orbit and other higher orbits. The trend toward miniaturization coupled with enhanced functionality shows little sign of slowing down and, in fact, is increasingly supported by an ever-expanding range of miniaturized passive and active components designed to leverage improved material purity, new device processing techniques, and manufacturing advancements to deliver enhanced performance in small packages. For instance, systems that were initially based on several individual transistors are now controlled by small form factor FPGAs.

However, aerospace systems that use advanced semiconductors to help achieve size reductions tend to have increased EMI susceptibility, which, when considered alongside the risk of both natural and engineered EMI, like targeted energy threats, creates a scenario in which EMI control is a primary design concern. In fact, EMI control is so crucial in today’s noisy electronic environment that there’s also been a trend towards increased government regulations — including the European Commission’s Electromagnetic Compatibility (EMC) Directive and regulations drafted by the FCC’s EMC Division — specifically aimed at mitigating EMI threats and effects in critical, high-reliability applications.

Luckily, since many of the subsystems within flight electronics are housed in metal boxes that essentially serve as Faraday cages, optimal EMI control often only requires the addition of bulkhead filters on the I/O and power lines that enter the box. Bulkhead filtering solutions provide ideal EMI noise control in these types of applications because the filtering occurs at the box interface, which eliminates any concerns about traces of radiation emanating from SMT filters.

Bulkhead filters are designed to be mounted in holes within the walls of electronic enclosures and to pass signals from the outside environment, through a variety of optional filter types, to the internal box, as shown in Figure 1. Standard bulkhead filters can either be bolted or soldered into enclosure walls while bulkhead filter arrays, which are often associated with pogo pins and filter pads in power and battery charging applications, can be soldered, attached with conductive epoxy, or brazed onto these boxes.

All bulkhead filters, regardless of form factor, connect the signals on each side of the box through the filter network, which can employ C, L, T, Pi, LC, or CL filters, or even transient suppression devices, to help control EMI. 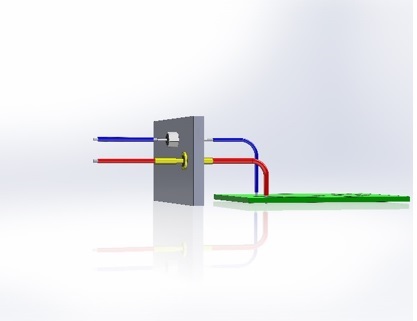 F2
Figure 2: This table lists several filter types commonly employed in bulkhead filtering solutions and the types of applications for which they are well suited.

Most of the bulkhead-style EMI suppression filters available on today’s market employ discoidal capacitors, which can be manufactured with outer diameters as small as 0.050” with as much as 5,000pF of capacitance and offer equivalent models that help ensure effective insertion loss in the range of 10GHz and beyond. Discoidal capacitors have a circular form factor featuring an inner metalized termination hole for one set of electrodes and an outer metallized edge that connects the opposing electrode set and is typically either soldered into place within the plated metal housing of a bulkhead filter or attached with conductive epoxy. The ceramic dielectric of the discoidal capacitors used in bulkhead filters can be based upon any dielectric, although only those with NP0/C0G and X7R dielectrics are discussed here, and the inductors used in these filters can range from ferrite beads to magnetic core and wire-wound devices.

Once the internal design of a bulkhead filter has been completed and electrically assembled, the internal components are then isolated from the outside environment using either epoxy resin for non-hermetic applications, a glass seal for hermetic applications, or a combination of epoxy and glass for applications where only one end of the filter needs to be hermetically sealed. Epoxy resins are selected based on their compatibility with the internal components’ coefficient of thermal expansion (CTE), as well as their ability to provide protection from shock and vibration and to seal the internal filter components from the effects of moisture and other ingress hazards in the operating environment. Unlike resin-filled filters, hermetic devices have a glass-to-metal seal soldered onto the metal housing to ensure zero possibility of outgassing and provide the highest possible level of environmental isolation between internal filter components and the outside environment. One commonality between the two sealing technologies is that both require special care in terms of torque and heat during filter installation. Excessive heat and torque can deform metal filter housings and impart stress on the ceramic discoidal capacitors within, which can break hermetic seals and cause the capacitors in both resin-filled and hermetic filters to crack.

When properly selected and installed, bulkhead filters provide the best possible EMI control for critical aerospace applications in terms of both high-reliability operation and the highest-attenuation filter responses because the attenuation occurs at the Faraday cage (i.e., the box enclosure wall) rather than after the signals enter the case. Filtering within the enclosure walls does nothing to control signals radiated from or conducted onto lines prior to SMT filters.

The need for smaller, lighter-weight components, devices, equipment, and systems is easy to understand given that the cost of launching just one pound of hardware into space is approximately $10,000 and the fact that both the performance of and operating expenses for military and commercial aircraft are directly affected by the total weight of the craft. However, while designers can employ a variety of high-density filter configurations and employ an ever-expanding range of miniature, high-performance filters in these applications, these reductions simply cannot come at the expense of filter capability, throughput current rating, or reliability, as effective EMI control is also crucial to operational success.

There are two simple methods for increasing filter density on a box wall, with the most obvious being to use round-head filters in place of hex-head configurations. Round-head filters require virtually zero clearance for assembly and torquing relative to hex-head filters and can also be tightened with modified tools on the vertical axis of the filter. While these higher-density configurations don’t reduce the overall volume or weight of the filters, they do enable more tightly packed I/Os and, as such, offer the potential for achieving higher box densities, which can help support total volume reductions.

The second option for increasing filter density on a box wall is to consider custom filter plate assemblies that employ round-head filters fitted within custom steel, brass, or aluminum plates specially designed for maximum density and minimum mechanical stress. Assemblies also provide finished, high-density filter solutions that have been torqued, soldered, and tested prior to shipment, which can help reduce installation time and costs.

In order for filter components to directly contribute to total weight and volume reductions, designers must employ miniaturized filters. Miniature bulkhead filters are specially designed to offer notable mass and volume reductions compared to traditional filter types and are widely available from a range of proven passive component suppliers. Most of the various miniature bulkhead filter families available in today’s market are based upon the smallest discoidal capacitors and inductors available.

The miniaturization trends of bulkhead filters can be grouped into three categories: miniature, subminiature, and microminiature filters — all of which offer spectacular volume and mass savings, even when compared to discrete SMT filter capacitors. For example, the weight of a 0805 SMT MLCC is approximately 0.020g and occupies 0.0049cc. However, SMT MLCCs also require PCB pads and adherence to “keep-out” rules, and when those factors are accounted for as well, the total volume of the discrete 0805 SMT MLCC nearly doubles to ~0.0085cc. In addition, the SMT MLCC would exhibit a filter response that’s roughly only 10% as efficient as a miniature bulkhead filter. True efficiency would depend on a complex weighing of frequency response needs and routing impacts and, as such, could vary greatly depending on end designs.

Figure 5: This table compares the performance characteristics of three categories (miniature, subminiature, and microminiature) and two styles (solder-in and bolt-in) of miniature bulkhead filters rated for 200V and 10MHz to 10GHz operation.

In addition to considering the range, mass, and volume characteristics of miniature bulkhead filters, aerospace systems designers should also pay special attention to the filters’ attenuation across frequency. The insertion loss requirements of a C-type filter with 1nF capacitance per the MIL-PRF-28861/12 specification are shown in Figure 6. Regardless of their physical size, standard, miniature, subminiature, and microminiature bulkhead filters for aerospace applications meet or exceed the attenuations in the table.

F6
Figure 6: Attenuation characteristics for a C-type filter with 1nF capacitance per the MIL-PRF-28861/12 specification.

An additional comparison test has been conducted using the human body model (HBM) of 150pF, 330Ω, and contact discharge to determine the ESD survivability of bulkhead-mounted feed-through filters. During this test, which featured a 10Hz repetition rate of alternate polarity pulses, a total of 10 pulses of varying magnitude were injected into the centre pin of C-type bulkhead filters with 10pF, 100pF, and 1,000pF (1nF) capacitance at the 8kV test level and resulted in zero failures. Additional work is currently being conducted to determine the maximum voltage survivability and repetitive strike wear-out characteristics for these components.

The Future of Bulkhead Filters

As component designers continue to reduce the mass and volume of bulkhead filters, they will eventually be met with practical size limits determined by the capacitance values and case sizes of the miniature discoidal capacitors embedded within. At some point, the amount of electrode pullback from the capacitors’ exterior ceramic walls will be greater than the active area of the discoidal capacitor, which would cause any further size reductions to dramatically reduce capacitance values.

Stackpole Reduces Resistance of its 0805 Current Sense Chip Resistor Down to 0.5 milliOhm