Capacitors are increasingly being recognized for having the potential to improve efficiency and, therefore, power density. Read the next article by Kemet Engineering Center about the ceramic technology guidelines for high power density circuits.

The amount of data we’re generating today is mind-blowing. In the last couple of years 90 per cent of the data in the world was generated, and we’re creating over 2.5 quintillion bytes of data every day. This means that there will be 40x more bytes of data than there are stars in the observable universe by 2020! All this data relies on electrical power. And, the internet of things, and adoption of hybrid-electric vehicles is only going to accelerate this demand.

Engineers are continually seeking ways to make devices more efficient to conserve the amount of power we need. Switching semiconductor devices have been the main focus for increasing efficiency and power density as they significantly contribute towards dynamic and static losses in any power system. However, it is becoming ever more expensive and challenging to achieve incremental improvements. Capacitors are increasingly being recognized for having the potential to improve efficiency and, therefore, power density.

There are three areas in power design where capacitors can positively impact the efficiency of the system, each have a slightly different requirement from the capacitor: 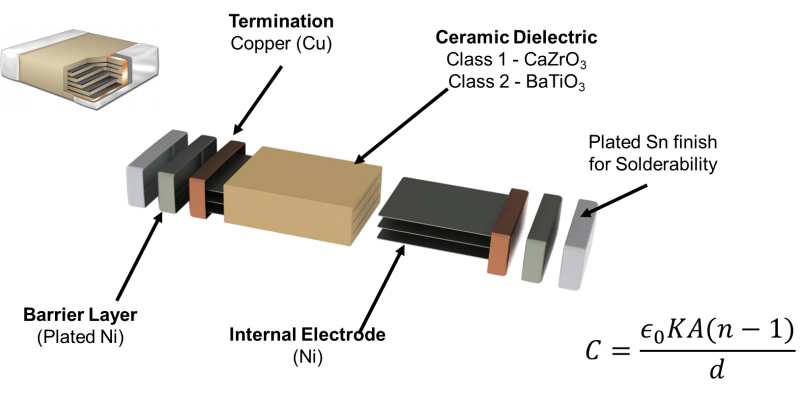 Figure 1: Exploded View of a Base Metal Electrode MLCC

How stable is the dielectric?

Dielectrics are classified by their capacitance stability over temperature. Class I – C0G, NPO, U2J – contains the most temperature stable dielectrics, but these have the lowest dielectric constant (K). Therefore, a higher volume is needed to achieve the same capacitance as Class II  MLCC types.

Class II dielectric materials – X7R and X5R – have mid-range temperature stability and values of K. Class II MLCCs provide a much higher capacitance per unit volume compared to Class I. But, as Class II MLCCs use a BaTiO3 dielectric there are some characteristics that can drastically influence their use in power applications. For example, capacitance can be affected by the operating temperature, applied DC bias, and time after last heat (aging).

Stability of capacitance vs voltage (VCC) has no EIA definition. However, users can see a decrease in capacitance of up to 80% at rated voltage for higher capacitance Class II MLCCs. This VCC characteristic also varies widely between manufacturers.

In addition, capacitance can also decrease due to ageing – or time after last heat. It is usually between 2-5% per decade hour after the last heat above 130oC, which is typically when soldering the parts during the manufacturing process.

In comparison, Class I dielectrics are much more stable, making them the perfect choice for resonant applications such as wireless charging circuits and LLC resonant converters. For example, C0G has a slight capacitance shift of 30ppm/°C, or 0.3% at 125oC, while U2J has 750ppm/°C or 7.5% at 125oC but is linear and predictable. Both C0G and U2J have negligible capacitance change vs DC bias and almost no change vs time (aging).

Equivalent Series Resistance (ESR) is also a vital characteristic to consider for capacitors in power applications due to i2R losses. BaTiO3 is a ferroelectric material, and as such it can create domain regions within the dielectric and domain wall heating and higher ESR compared to Class I dielectrics. It’s common for Class II MLCCs to have an ESR that is up to two orders of magnitude higher than Class I MLCCs. An example of ESR for Class I C0G/U2J MLCCs and Class II X7R can be seen in figure 2. 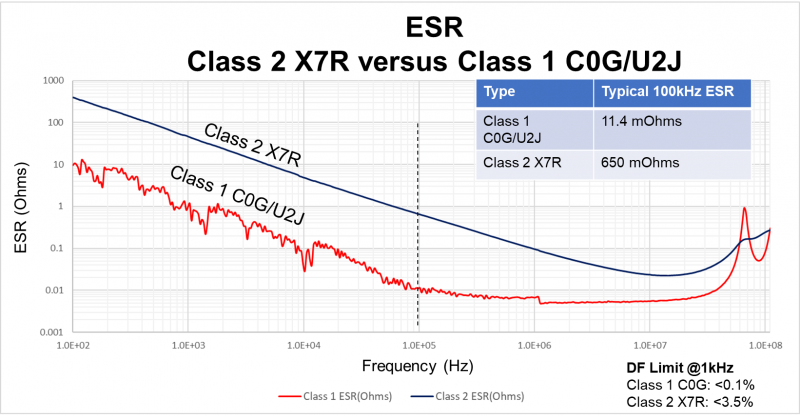 High ESR from the high AC in power applications results in excessive heating. Figure 3 shows that X7R increases by 40oC with just 5Arms, whereas C0G and U2J dielectrics experience a self-temperature rise of approximately 15oC at 10Arms. 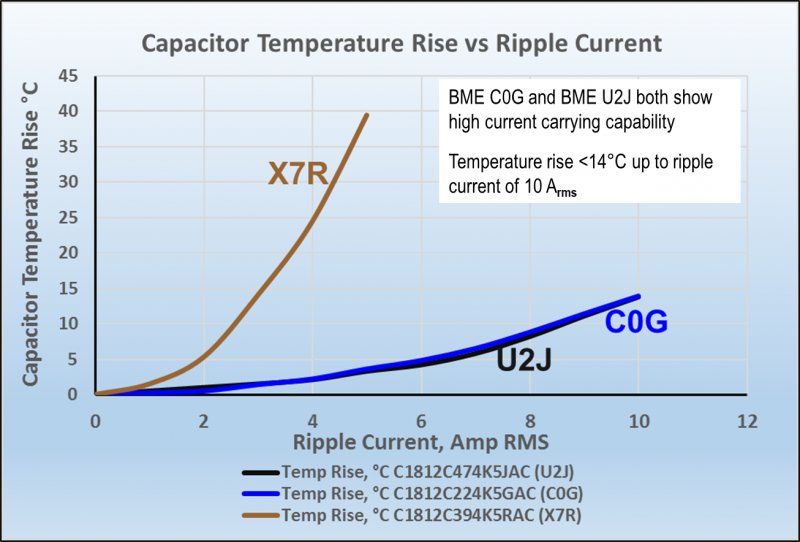 Class I technologies come out on top

It is clear to see that Class I BME dielectric based MLCCs including C0G and U2J have high temperature stability, low loss and high ripple current capability, and stand out as the ideal choice for high power density applications. Their performance is predictable, and designers can achieve fine tolerances.

But what are the latest Class I solutions? Here we’ll delve deeper into Class I technologies that are enabling engineers to make their devices more efficient.

We have recently introduced the surface mount KC-LINKTM 3640 220nF 500V capacitors which are designed specifically to meet the growing demand for fast switching semiconductors that operate at higher voltages, temperatures, and frequencies. The ceramic capacitor uses a CaZrO3 dielectric material and provides a very low-loss solution with ESR values below 4mW from 40kHz to 1MHz and as low as 2mW around 50kHz. This allows for typical ripple currents around 20Arms from 50kHz to 300kHz at 0V DC bias at 105°C ambient.

Applications often require higher levels of capacitance than high performance Class I dielectrics can achieve, and this requires increased board area. But, with increasing board area comes a reduced power density of the solution. We have developed KONNEKTTM technology – a leadless multi-chip solution design for high efficiency and high-density power applications – precisely to address this problem. KONNEKTTM uses transient liquid phase sintering (TLPS) process to combine Class I MLCCs which can be mounted using standard reflow practices.

Let’s take a look at an example of how this technology is providing high power handling capability:

Three U2J 0.47mF 50V 1812 MLCCs can be joined in ‘standard orientation’ using KONNEKTTM technology and provide a capacitance of 1.4mF in the same footprint as a single MLCC, as shown in figure 2. Further benefits can be achieved by placing the assembly on its side – known as ‘low-loss orientation’ – whereby lower ESR, lower thermal resistance and inductance (ESL), and ultimately higher power handling capability can be achieved. 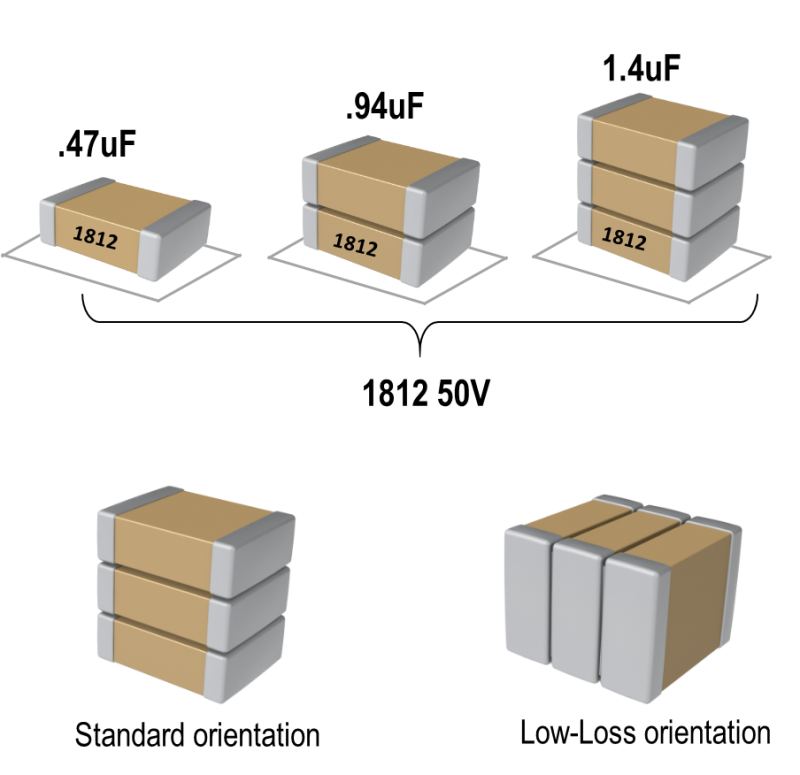 Energy efficiency is high on the agenda in today’s world as it reduces operating costs for significant power usage including automobiles and data center applications. Most of the development effort to date has focused on circuit topologies and semiconductor performance, but passive components such as capacitors are now proving that they have a significant positive impact on power efficiency.

Capacitors Can Help With ESD Too