Polypropylene (PP) is from a molecular point of view a non-polar dielectric with small losses and a relatively straight and moderate TC. Since the smallest film thickness is approx. 3.5 μm (0.14 mils) and εr ≈ 2.3 the capacitor can not come down to those sizes characterizing 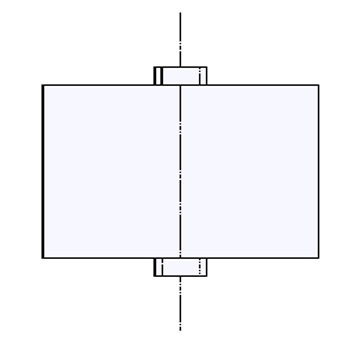 PET at low rated voltages. But remaining good characteristics in many applications have brought up PP as a replacement for polycarbonate (PC) and polystyrene (PS), not least as a precision capacitor. PP exists in both foil and metalized design and is adapted for both AC, pulse and transient suppression (X-capacitor) applications. The pulse and X-capacitor designs, however, require specific metalizing technology.

The MKP design had from the beginning problems with the adhesion between the metalized layer and the plastic film. This problem characterizes non-polar dielectrics consisting of molecules and has caused many problems at, for example, gluing of components to circuit boards. The plastic surface film has to be raised and roughened which among other things can be done by etching, flame exposure, electron irradiation or corona. Today the MKP design is well established and the adhesion problems a past period.

The demand for filtering/interference suppression of thyristor generated noise voltages has brought forth the same type of large capacitors as shown for PET but here the low ESR losses allow quite different r.m.s. currents, for example at high frequencies.

The recommended absolute maximum temperature is +105°C. We recommend max +85°C with the remark that developments of new films is going on to offer temperature range above +105°C as a maximum operating temperature. Current temperature limitations still make PP difficult for chip designs. 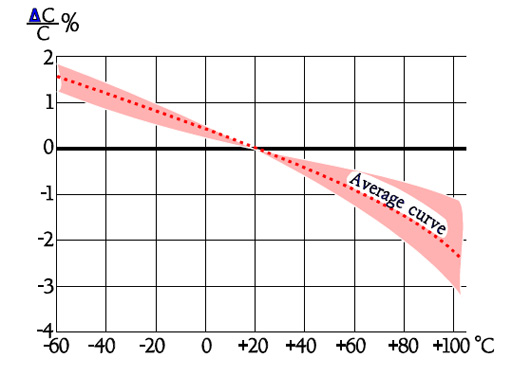 Figure: Typical curve range for capacitance versus temperature of the KP and MKP design. 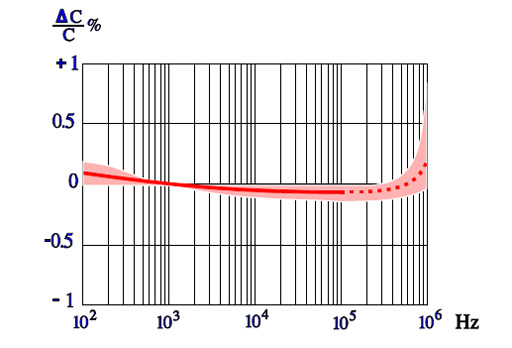 Figure: Typical diagram of capacitance versus frequency for KP/MKP designs.

The frequency dependence of capacitance for PP capacitors is moderate. In Figure C2-46 the broken part of the curve indicates an increase of capacitance. This increase is not physical but depends on influence from series capacitance measurements according to Formula C1-10.

Improve Your Design In Terms Of Performance, Reliability, Cost, And Delivery Using DoEEEt

Press here to see what doEEEt can do for your design

Figure: Typical curve range of Tanδ versus temperature for MKP and KP.

Note in the above figure, the outstanding low loss factor for PP over the whole temperature range.

Figure: Typical curve range of Tanδ versus frequency for KP and MKP capacitors.

The curve area in the above figure represents capacitance up to some hundreds of nF. The higher capacitance, the greater losses. 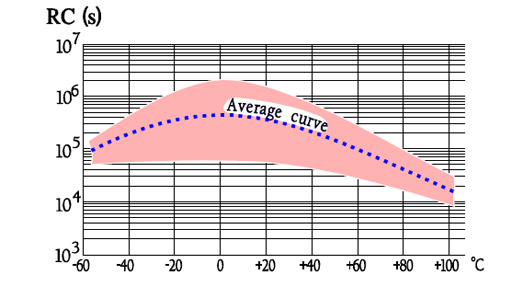 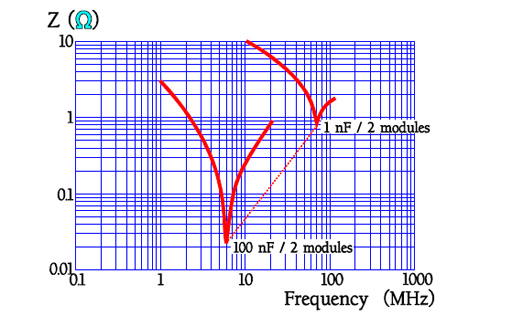 Any characteristic failure mode just for PP capacitors is not distinguishable. Here what was said about PET usually applies. 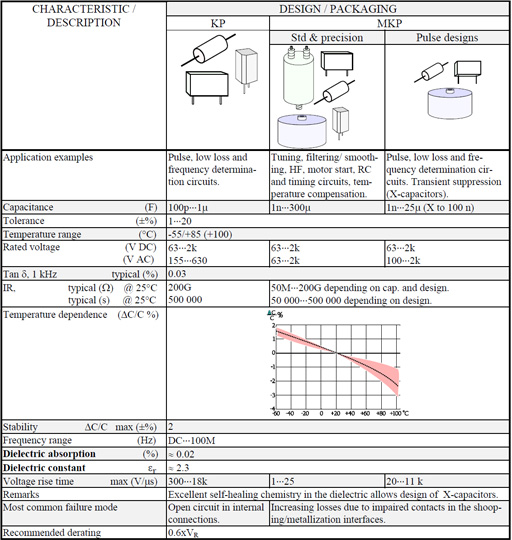 For a long time, the polycarbonate capacitor has been predominant among metalized precision capacitors. Nowadays, however, the MKP capacitor has taken over more and more applications from the MKC. Where one has been able to disregard the TC differences the foil design of the KC often has replaced polystyrene (PS) but also here KP capacitors are replacing those of polystyrene. The manufacture of PC film, therefore, is declining and, will eventually cease. We shall have a closer look at reasons and characteristics.

The polycarbonate film is unlike other plastic films prepared from an emulsion that is dried. Its least thickness is stated to 1.5 μm (0.06 mils) and its εr to 3.0 at 1 kHz and room temperature. This film has small dielectric losses, a high IR, a small temperature dependence and a maximum temperature that by many manufacturers was specified to +125 °C. Thus it was rapidly popular, not least in precision capacitors.

Because there is a certain risk of increasing IR failures above +100 °C we recommend this ambient as a maximum or, not more than that of the manufacturer’s data sheet if they specify a lower temperature.

Genuine SMD designs are missing but there are examples of broad spread-out metal strap terminals reminding of the Gull wing design. But check if it is a single source situation. 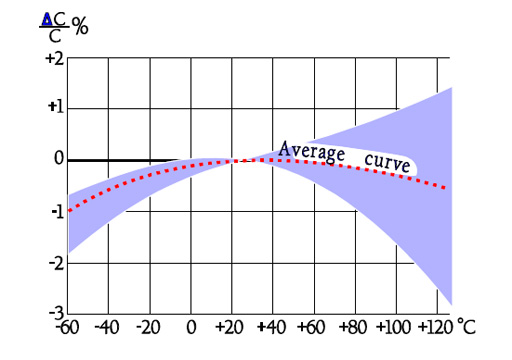 Figure: Typical curve range for capacitance versus temperature in KC and MKC designs. 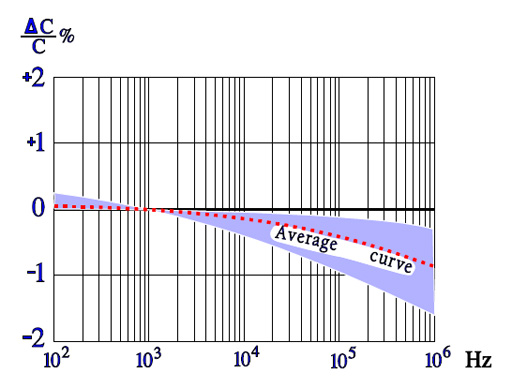 Figure: Typical curve range for capacitance versus frequency in KC and MKC designs.

Figure: Typical curve range for Tanδ versus temperature in KC and MKC designs.

Figure:  Typical dependence of Tanδ versus frequency in KC and MKC capacitors. 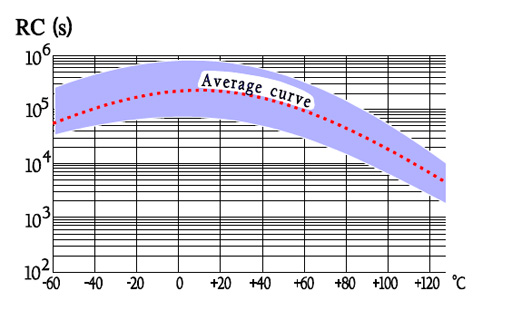 Figure:  Typical function of RC versus temperature in KC and MKC capacitors. 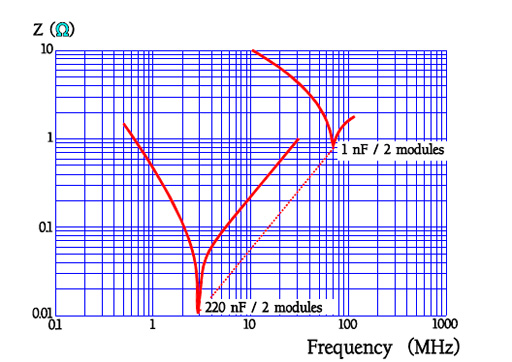 In 1977-78 some mysterious short-circuiting failures were reported from precision capacitors in high impedance low voltage applications. In 1982 a Voyager satellite was met with a failure in a 8 μF/ 75V polycarbonate capacitor. Half-way to Jupiter the IR suddenly dropped from hundreds of MΩ to 2.8 kΩ. All over the world component experts worked with this kind of problem and by and by the picture became clearer.

The issue is a critically high carbon deposit in former self-healing sites, which is connected with the high carbon contents in the polycarbonate film. But the failure only appears in that very narrow application sector where just precision capacitors usually are used, namely at low voltages and in high impedance circuits, e.g. integration and ramp voltages. Even that very low energy needed to burn away the formed carbon string may be missing. The cure is some kind of Burn-in treatment. From a failure rate in the magnitude of, say one percent, we should get down to or below one per thousand. The most sophisticated (and expensive) Burn-in program we find in US MIL-C-87217. In conclusion, it is built on a collection of all those environments which are regarded to release this kind of short circuits: cyclic voltage ramps with polarity changes + gradual temperature fluctuations. 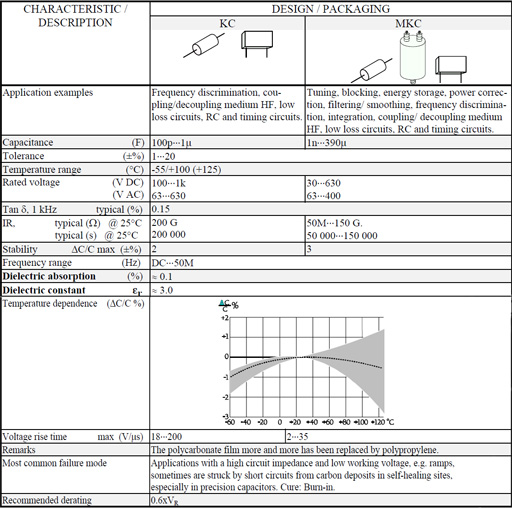