Importance of the SAM for delamination detection

In the last few years, there has been an increase in the popularity of commercial EEE components. For its implementation in high-reliability applications, it is necessary to have a technique that deeply analyses the devices’ internal structure, integrity, stability, and defect identification.

Scanning Acoustic Microscopy is a technique that has been revealed as the most effective and complete non-destructive approach for the detection of critical and latent anomalies within plastic encapsulated parts, either before soldering and on assembled systems: Therefore, it is routinely used and required to screen out potentially defective parts before the implementation into different industrial sectors such as automotive, military industry, avionics, space applications, and others.

Such a technique has a sensitivity to density changes, making it a reliable and accurate technique to detect “air-gap anomalies” such as delaminations, voids, and cracks.

Delaminations, defined as a lack of adhesion between two interfaces, is the most common defect found in plastic COTS during the SAM screening, and ;different factors may originate them some of the most important ones are:

These delaminations may lead to failure mechanisms, such as poor mechanical stability, wire bond damages like twisting, necking and breakage, inefficient heat dissipation, and popcorn cracking.

The picture shows a case where delamination was detected during SAM inspection; this anomaly extends a huge area from one edge of the paddle to the die, covering almost the entire length. As you can see in the X-Ray image, there is no evidence of delamination since this technique is not sensitive to this kind of defect. However, the presence of this air-gap anomaly was confirmed after performing a cross-section.

This kind of delamination may not be rejectable now. Still, it clearly menaces the structural stability of the device, and this defect is very likely to expand due to factors such as the ones described above, causing the final failure of the part. 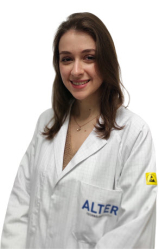 Raquel Cano Cordero
Raquel has a Degree in Material Engineering and a Master's Degree in Materials Science from the University of Seville. Master thesis project about "One Dimensional Nanotubes as Highly Sensitive Surface-Enhanced Raman Scattering (SERS) Based Sensors" at the Institute of Materials Science of Seville. She joined Alter Technology as Scanning Acoustic Microscopy Analyst from 2020 to 2022.

Currently, she is not in our company anymore, but is mentioned as an external collaborator in our blog.